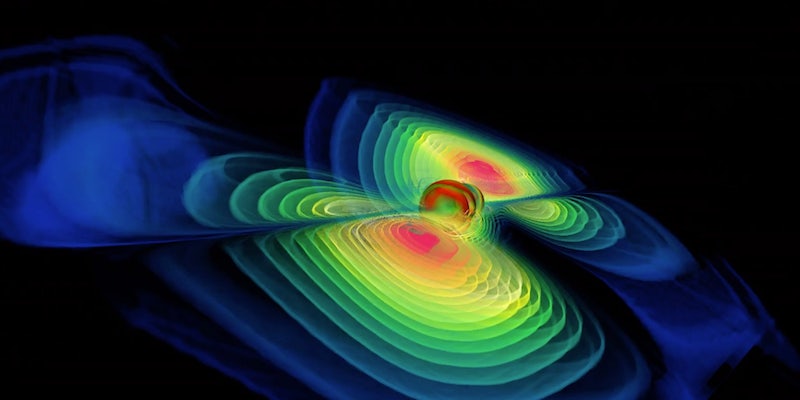 We can thank an implosion of two black holes for bringing us a huge breakthrough in science.

Thanks to a cataclysmic collision of two black holes, scientists on Earth have been able to capture proof of gravitational waves for the first time in history.

In a major breakthrough for astrophysics and the study of the universe, the National Science Foundation has revealed that scientists at LIGO, the Laser Interferometer Gravitational-Wave Observatory, have finally recorded gravitational waves. Albert Einstein first predicted the existence of gravitational waves in his theory of relativity in 1916.

LIGO houses an enormous set of interferometer detectors located hundreds of miles away—one half in Washington, the other half in Louisiana. In September, the detectors caught the massive “ripple effect” of gravitational waves—the result of a collision of two black holes in a far corner of the universe.

The discovery is a major scientific advancement. Gravity is such a weak force that up until now, scientists had only been able to observe the effects on gravitational waves by studying the behavior of dense neutron stars called binary pulsars.

In a press conference attended by a bevy of collaborating scientists from major universities around the country, LIGO co-founder Kip Thorne of the California Institute of Technology hailed the triumph as “a whole new way to observe the universe.”

The press conference coincided with the publication of a paper explaining the discovery in the scientific journal Physical Review Letters.

“Until now, we as scientists had only seen warp space-time as very calm,” Thorne said, describing the universe as a smooth ocean, on the surface of which gravity formed only the weakest of waves. “We had never seen the ocean embroiled in a storm with crashing waves.”

Thorne said that the colliding black holes that created the gravitational waves “created a violent storm in the fabric of space and time,” which essentially acted like a boulder thrown in the middle of a lake, causing ripples that reached all the way to our edge of the universe. To be clear, the black holes collided 1.3 billion years ago; the waves just reached Earth in September.

Thorne noted that the collision produced an energy burst, known as a gamma ray burst, that was 50 times greater than the output of “all the stars in the universe put together.”

Thorne joked that the energy outburst was the equivalent of taking three suns and “annihilating them,” turning their energy into gravitational waves.

“This was a gift of nature,” said Louisiana State University scientist Gabriela Gonzáles.

Scientists have spent years trying to measure the existence of the waves using various metrics, from light to radiation to electromagnetic fields. LIGO essentially works by attaching omnidirectional laser detectors to large self-contained air vacuums, which essentially function as an empty space antenna. When gravitational waves pass through the vicinity of the antenna vacuums, the lasers are able to detect them because the vacuum contains no noise that would otherwise muffle the waves.

Scientists also promised that they would continue ramping up the sensor abilities of the interferometer detectors, which would enable even greater discovery capabilities and greater ability to pinpoint where in the universe the waves are originating.

Additionally, new observatories in Europe, India, and Japan are on the way.