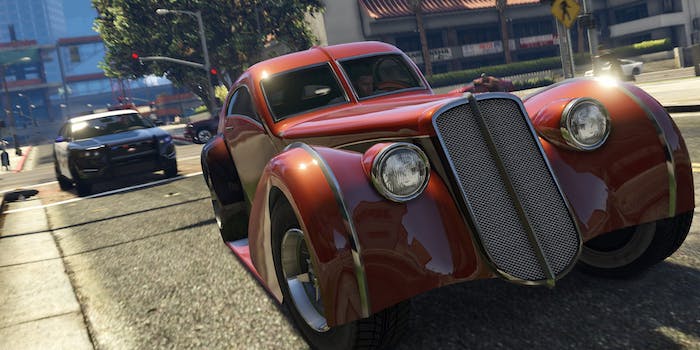 But still no word on heists.

After teasing a new release of Grand Theft Auto V on the PlayStation 4 and Xbox One this summer, Rockstar has finally issued a release date—Nov. 18.

The company also rattled off a list of coming improvements to the game as it moves to the next generation of consoles. We already knew that the visuals would be markedly improved, as demonstrated again in the new trailer released today:

Some of the changes are purely aesthetic and atmospheric, like better weather effects, denser foliage, and more wildlife. Increased traffic density will have bearing on gameplay. It was tough enough to not smash into another car when you were going 250 miles per hour down the highway while being chased by a half-dozen police cruisers when the traffic was set to current levels.

Rockstar has promised the return of vehicles from across the Grand Theft Auto franchise, which should be awesome for long-time GTA fans. Grand Theft Auto III, the first three-dimensional game in the series, was released 13 years ago, with four original games and four substantial expansions released between GTA III and GTA V. That’s a lot of games from which to draw legacy content.

Grand Theft Auto Online, arguably the part of the package responsible for keeping GTA V relevant enough for a next-gen release, is seeing the maximum number of players per instance bumped from 16 to 30. That’s good news for anyone who’s had trouble jumping into a session in progress with friends.

But there’s still no release date for heists, which is beginning to feel ridiculous. One could argue it’s an act of hubris to release a year-old game onto new hardware and expect the game to sell, when gamers’ collective attention slides away from blockbuster games six months after release. This is Grand Theft Auto V, however, a game that made $1 billion in three days.

But it also begins to feel like a joke when that re-release doesn’t include content players have been waiting for since September 2013. Heists—complex robberies with huge payoffs that require multiple tiers of planning and coordination to pull off successfully—were listed as “coming soon” to Grand Theft Auto Online when the game was released.

There’s actually a room in some of the apartments in Grand Theft Auto Online, with a huge map of the state of San Andreas on the wall, that’s meant explicitly for planning heists.