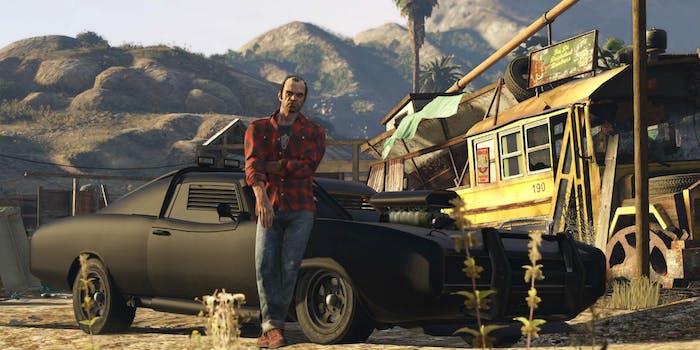 Rockstar Games wants to make a next-gen upgrade worth your while.

Rockstar Games is trying to strike gold with the same game two years in a row, offering old Grand Theft Auto V players a bunch of cool stuff if they make the upgrade from previous-gen consoles.

The list of exclusive content for Grand Theft Auto V players who make the jump from the current PlayStation 3 and Xbox 360 versions, to the upcoming PlayStation 4 and Xbox One re-releases, as well as the fresh release on PC was revealed today by Rockstar Games. To gain access to the new content, players have to transfer their characters from one of the previous versions of the game over to one of the new versions.

A new story mission for Michael during the single-player campaign is the biggest reveal. An unlockable submarine is entirely fresh content, and we have to wonder how powerful a handheld railgun will be. Because it’s a freaking railgun.

Rockstar hasn’t detailed what the “unique events” taking place in the game world will be, but it has revealed some of the rewards for finding and completing those events, which include a return of the Dodo seaplane from previous GTA games and a muscle car that looks like it’s straight out of The Road Warrior. Rockstar also promises stock car races, unique vehicles, and a new collectible activity.

It would have been interesting to see how many Grand Theft Auto V players on the PlayStation 3 and Xbox 360 made the jump to the upcoming next-gen versions of the game without any special inducements to do so. The list of basic improvements made possible by the upgrade to next-gen hardware alone promises to make Los Santos and San Andreas feel even more like proper virtual realities, which is the broad appeal of the GTA series. The more real it seems, the more fun the chaos that ensues.

What’s going to be especially interesting is how much money the GTA V re-release manages to haul in. The original release took place on Sept. 17, 2013, very early in the fall release season, and it raked in $1 billion in three days. The re-release takes is happening deep into the fall 2014 release season, and it’s surrounded by a bevy of new next-generation triple-A games.

The last time Activision announced profits for Destiny, it claimed $500 million sell-in (copies sold to retailers.) If Grand Theft Auto V can bring in even half of what it did last time, Rockstar Games will be able to claim another huge holiday release that stood toe-to-toe with entirely fresh games. The idea seems crazy, but a bet on Rockstar is usually a safe one.

The PlayStation 4 and Xbox One re-releases of Grand Theft Auto V arrive on Nov. 18. The PC version of the game is expected in early 2015.