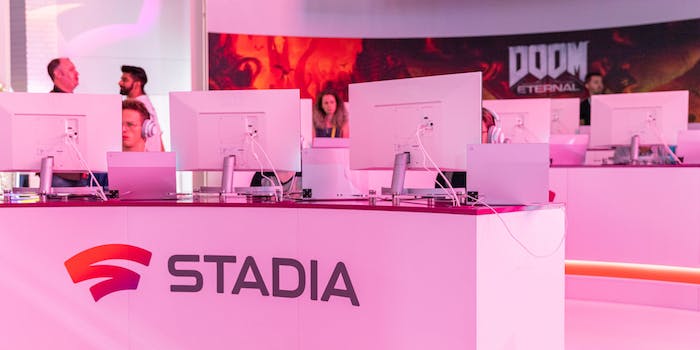 Google Stadia: Everything you need to know about Google’s upcoming gaming service

Google Stadia, a new cloud gaming service, drops this November. Here's everything you need to know.

The days of physical gaming consoles are far from over, but Google is changing the landscape with Stadia, a purely cloud-based gaming service. Intended to solve several of the problems posed by traditional consoles, Google Stadia will boast top-notch graphics and seamless gameplay. It’ll also host several titles from beloved franchises like Cyberpunk, Borderlands, and Baldur’s Gate.

So how will Google Stadia work, exactly? Here’s a rundown of everything you can expect.

What is Google Stadia?

Google Stadia is a gaming service that can run on any screen of your choice, whether that’s a TV, PC, or mobile device. Think about how streaming services offer a ton of movies and shows from different studios. Stadia is the gaming equivalent. It’ll host a vast library of games from various developers and consoles, as well as Google exclusives. It’ll allow for more co-op gaming and better, more streamlined gameplay experiences overall. Above all else, Google Stadia offer a unique gaming experience that won’t require you to deal with the constraints of physical consoles.

How to buy Stadia: release date and prices

The Google Stadia will come out on Nov. 19, 2019. Once it drops, gamers will have a couple of options to explore, price-wise. The first is Stadia Pro, a Netflix-esque subscription costing $9.99 in the U.S. and $11.99 in Canada. Stadia Pro will support a 4K resolution and 60fps gameplay, and subscribers will have access to several older PC and console games. Newer titles, however, will be sold separately.

The second option is the $129 Stadia Founder’s edition, which is already available for pre-order. Purchasing the Founder’s edition will allow you to pick your Google Stadia username before other users, and it’ll grant you access to the highly anticipated Destiny 2. Furthermore, customers will get three months of Stadia Pro service, a Chromecast Ultra, a limited edition Night Blue Google Stadia game controller, and a buddy pass code that’ll grant a friend three months of Stadia Pro.

Google will eventually make free Google Stadia access available in 2020, but this free tier will not include any games or resolution above 1080p.

The perks: specs and gameplay

Because Google Stadia will be free from the limitation of hardware, it’ll be easier to upgrade—this might just make it better than any gaming console available right now. However, you do need a wifi or Ethernet connection (rather than a wireless cellular connection), the quality of which will affect resolution and more. With a 35Mbps connection, you’ll be able to stream games with 4K resolution, 60fps, and 5.1 surround sound; 20Mbps will support 1080bp gaming and 5.1 sound; and 10Mbps will allow for 720p gaming and stereo sound. 8K support is on its way as well. A custom AMD 2.7GHz x86 processor with 16GB RAM, and 484GB/s transfer speed, along with a GPU with 10.7 teraflops of power, will be available to all Google Stadia users.

Google also announced that this hardware-free approach to gaming will significantly innovate multiplayer gameplay. The cloud-based Google Stadia will ideally eliminate threats of hacking and cheating. Most importantly, since games will be exclusively processed on Google’s machines, players will supposedly experience stable, lag-free, synchronized gameplay. The company also promised that its top-notch computing power will allow thousands of players to participate in battle royales, rather than the customary hundreds.

The Google Stadia proprietary controller is optional—you’ll always be able to use a mouse, keyboard, or other compatible controller should you wish to do so. However, the wireless Stadia controller will probably be worth the $69, as it will connect right to Google’s servers via wifi (thus minimizing lag) and include several built-in features like Google Assistant support. The controller will also be able to plug into PC’s and mobile devices via USB cable as needed.

Games to look forward to

Google is sure to add more games to it Stadia library, but there are several titles we already know will be available. Here’s an alphabetized list of all the games we know will be playable through Google Stadia: