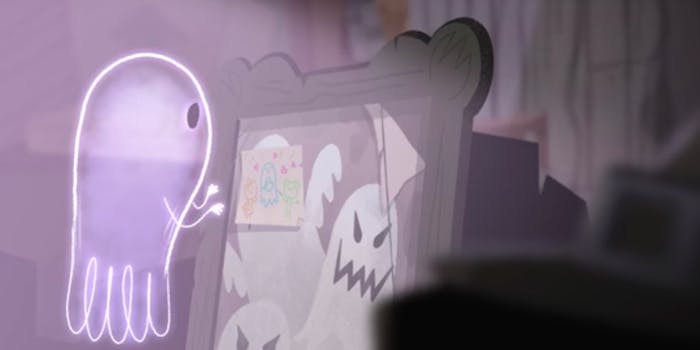 Google dropped its newest Halloween Doodle this morning, this time an enchantingly cute story that follows Jinx, a self-conscious ghost who tries to hide her ghoulish nature to fit in.

“In the end, Jinx finds wearing a disguise is no match for being yourself,” Google said on the Doodle’s archive page.

Our #Halloween #GoogleDoodle follows Jinx, a lonely ghost on a quest for the perfect costume—and a place to belong → https://t.co/tmcpJgV6WP pic.twitter.com/u08Ax5RKg3

In a two-minute short title “Jinx’s Night Out,” viewers meet Jinx who’s secluded in an abandoned home. The ghost forlornly looks out the window while trick-or-treaters pass by. As she is deliberating on what to do this Halloween (a familiar predicament we can all relate to), a familiar face goes by.

It’s Momo the cat and her friends, all dressed up for a night of fun. Jinx makes it her mission to find the perfect costume to hide her ghostly figure so she can join the group, shuffling through mummy and witch costumes that don’t work very well. At the end of the short, Jinx learns its best to always be yourself, after Momo and her friends accept the ghost for who she is despite initial hesitations.

According to a behind-the-scenes account of the Doodle, the creators originally drafted a story where Momo dressed up as a ghost for Halloween and fell under the spell of a real ghost before the team moved on to the “lonely ghost” concept.

It’s all too easy to feel alone during a holiday that amplifies getting out and socializing—especially for those already trying hard to fit in. The charming video does a great job animating the all-too-real feeling of struggling to find self acceptance and the perfect Halloween costume.