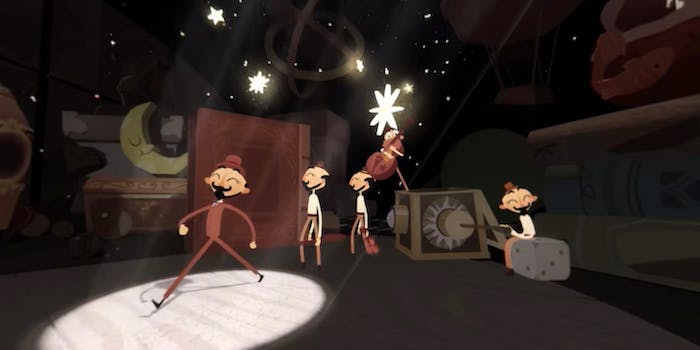 You’ve never seen a Google Doodle quite like this.

Google Spotlight Stories, Google Arts & Culture, and Cinémathèque Française teamed up to pay tribute to transformative French illusionist and director Georges Méliès. The Google Doodle VR falls on the anniversary of his 1912 film À la conquête du pôle (The Conquest of the Pole), but the VR experience includes homages to several of Méliès’ films.

The 3D animation in VR features a number of illusions and cinematic tricks that Méliès helped create—and that were revolutionary at the time—and nods to some of his characters. The colors nod to the often painstaking process that filmmakers at the time would go through to bring color into their work. And all of those visuals are tied together as the characters travel from the sea to the sky, ending with a nod to one of his more iconic shots: an image of the rocket smashing into the moon’s eye.

“In addition to being a magician, Méliès was an expert storyteller, so it was important for the Doodle to have a clear story,” Hélène Leroux, the Doodle’s project art lead, said. “We approached it as if it were a ballet or play you watch at the theatre, where you get to choose where to look. In these situations, the spectator becomes the camera, editing their own film.”

You can watch the latest Google Doodle on mobile, Cardboard, or Daydream with the Google Spotlight Stories app for Android or iOS. Or if you don’t have a VR headset to view it in, the experience is viewable as a 360-degree video on YouTube.