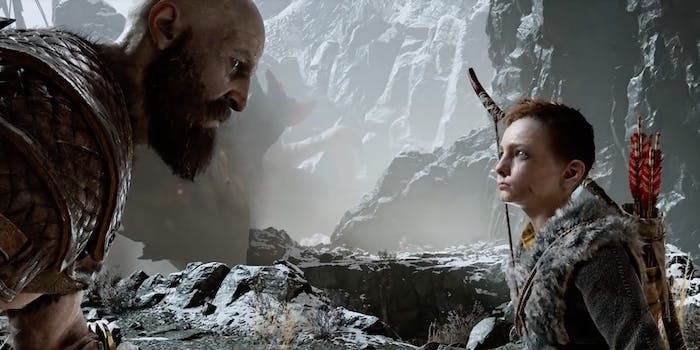 Here's when you can see the (slightly) softer side of Kratos.

Sony has a killer lineup of PlayStation 4-exclusive games planned for release in 2018, but not many of them have specific release dates yet. When will Spider-Man or Detroit: Become Human arrive? Who knows! But one of the most-anticipated games just got a meaty new trailer and an official release date. Sony announced God of War is coming to PlayStation 4 on April 20, 2018.

Previous God of War games have pitted the demigod protagonist Kratos against the mythical creatures and gods of Ancient Greece. This upcoming game finds Kratos heading up north, where he encounters (and presumably kills) many well-known gods and beasts from Norse mythology.

The new trailer is kind of like those movie previews that seems to show half the plot of the movie. Watch it, and you’ll have a good idea of what to expect from the game story-wise.

In addition to the new setting, Kratos has a new weapon, a new beard, and a companion: his son Atreus. The game follows the duo as they transport the ashes of Atreus’s mother to another realm. On their journey, Kratos and Atreus get to know one another. We also get to see Kratos acting like a mature father figure rather than the always-angry dude he was in previous games. Kratos trains his son for battle and teaches him lessons about what it means to be “more than a man.” Along the way, they meet a colorful cast of characters, one of whom requests that they chop off his head.

The trailer certainly makes God of War look like one of the most interesting games of the year. It’s worth noting that the whole game takes place in a single, unbroken shot, with no camera cuts.

If you feel like the trailer spoiled the story for you, don’t worry: most of the fun of any God of War game comes from actually playing it. Now, all we have to do is wait for April to roll around.