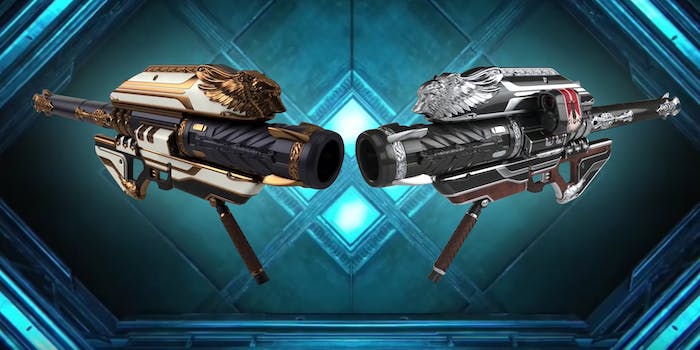 Bungie and Activision may as well start printing the money.

Of the cavalcade of named weapons in Destiny’s arsenal, only Gjallarhorn commands such immediate and total adoration from the game’s fans.

Gjallarhorn, perhaps the most powerful weapon ever handed to players, the one-size-fits-all solution to Destiny’s most difficult battles, was rendered ineffective and therefore effectively killed last September with the release of The Taken King, the most recent Destiny expansion.

Now, thanks to a leaked trailer for the upcoming expansion Rise of Iron, Destiny fans know that Gjallarhorn is back.

And Destiny fans are freaking out.

The return of the Gjallarhorn in Destiny is simultaneously the stupidest thing I've ever heard, and something I desperately want.

as if millions of voices suddenly went silent… The Iron Gjallarhorn pic.twitter.com/LTakgicEM5

The iron Gjallarhorn… Someone hold me

Gjallarhorn is so famous that we had to include it on our list of the most iconic video game weapons ever.

By attaching the Iron Gjallarhorn as a pre-order bonus for Rise of Iron, Bungie and Activision may have already assured the success of this new expansion.

That Rise of Iron includes an entirely new environment for players to explore—an area on Earth outside the Last City where the remnants of humanity take shelter—and a new raid, the high-end content that keeps Destiny players going for many months after the release of an expansion, among other new content all helps of course.

If Iron Gjallarhorn turns out to only be available if players fork over early their money for Rise of Iron, it’ll likely start a riot among Destiny fans.

But it’s Gjallarhorn, after all. Take our money.

This obviously was not how Bungie wanted us to hear about Iron Gjallarhorn. The official reveal of the Rise of Iron expansion will take place today at 10am PT on Bungie’s Twitch channel.