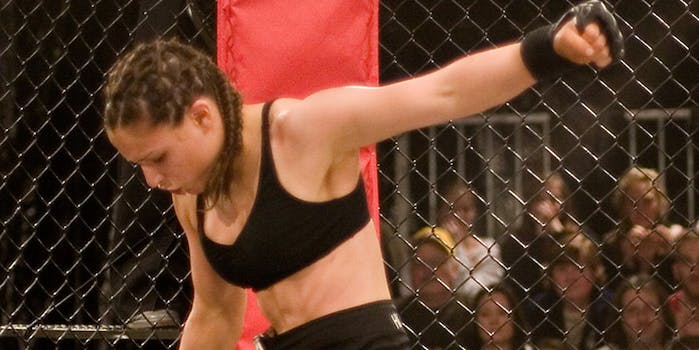 Gina Carano will have super strength in the 'Deadpool' movie. So, kind of like real life.

Carano is best known for the action movie Haywire, and her martial arts skills will undoubtedly be useful for Deadpool as well. She’ll be playing Angel Dust, a mutant character with adrenaline-powered super strength.

After years in development hell, Deadpool is finally in pre-production. The X-Men spinoff was resurrected last year after some old test footage made its way online. Ryan Reynolds will be reprising the role he played in the first Wolverine movie. We don’t know much else, except that Colossus (another minor X-Men character) will play a supporting role, although a new synopsis from THR reveals that they’ll be using a version of Deadpool’s origin story from the comics:

“[Deadpool] is an assassin who is dying of cancer who undergoes a procedure that is supposed to cure him but ends up twisted and scarred while also imbued with super-powers.”

Casting Gina Carano was a great decision for Deadpool‘s many fight scenes, although most fans will agree that this needs to be more than just an action movie. There are plenty of movies about assassins—even about super-powered comic book assassins—but there’s only one Deadpool. Fortunately, Reynolds has already hinted that the film’s comparatively low budget means they’ll be able to steer closer to the quirky tone of the comics, and that includes Deadpool breaking the fourth wall and talking directly to the audience.