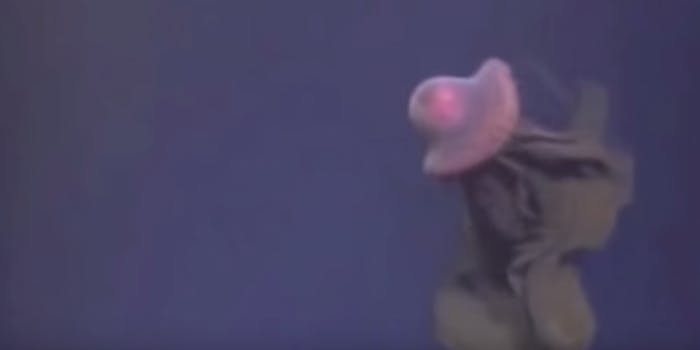 This giant jellyfish is armed with four long, grasping tendrils.

Depending on how you feel about mysterious ocean-dwelling monsters, you will either find this video terrifying or oddly relaxing.

Researchers piloting a remotely operated undersea vehicle recently ran into the deep-sea jellyfish Stygiomedusa gigantea, a bizarre creature that has only been spotted 115 times in the past 110 years and has only been caught on camera a handful of times.

This footage, filmed with a remotely operated underwater camera off the Gulf of Mexico, shows the giant jellyfish trailing its voluminous tendrils through the water. It’s strangely beautiful to watch.

Stygiomedusa gigantea‘s disc (the main body section) measures about one meter in diameter, and its four trailing arms can reach up to six meters long. The creature is thought to use its arms, which are described as “paddle-like,” to capture prey.We await the announcement of a low-budget Syfy channel movie about this monster any day now.