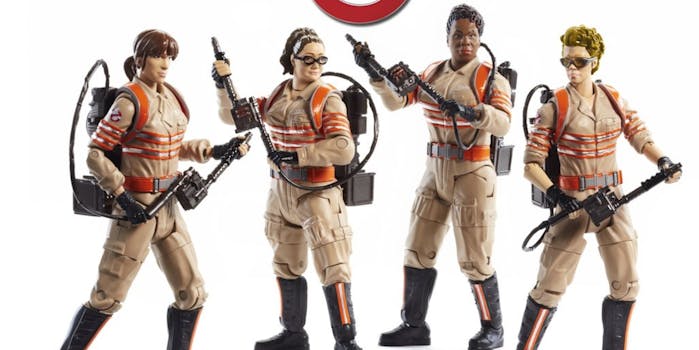 Good news, geek girls: The perennial marketing curse that seems to erase female action heroes from toys and collectibles won’t be calling on Ghostbusters. Director Paul Feig took to Twitter to make sure fans know that action figures of all four of the female leads are a priority.

The new Mattel action figures are the first look fans have had at offerings for the movie. They feature the main cast members: Leslie Jones as Patty Tolan, Melissa McCarthy as Abby Yates, Kristen Wiig as Erin Gilbert, and and Kate McKinnon as Jillian Holtzmann.

After spending years asking, “Where’s Black Widow? Where’s Gamora? Where’s Leia? Where’s Rey?” it’s understandable that geeks excited for Paul Feig’s upcoming all-female Ghostbusters remake were worried that movie’s product lines would be stunted. After all, the track record of collectible, clothing, and toy makers isn’t the greatest when it comes to giving women the attention on shelves that they get on screen.

But perhaps thanks in part to the Internet’s habitual calling-out and campaigning for the inclusion of women in tie-in products, we’ve seen the breakdown of traditional gendered marketing that focuses on selling male characters to young male consumers. It’s gotten a lot harder to pull stunts like swapping a dinosaur’s gender from female to male, or erasing a female character from one of her most famous scenes, without causing a public uproar. Fans have shown a willingness to convey their concerns to everyone from the stores and product makers to the film’s director:

@paulfeig hope they are they going to include all four women. My experience with Gamora, Black Widow & Rey has me feeling cynical…

Luckily for fans, Feig is more than aware of the controversy around the erasure of women as action figures, and he was quick to assure fans that it wasn’t going to be a problem with Ghostbusters:

Fear not. Action figures of our Busters have already been in production for months. Several types & sold separately. https://t.co/ucW3xdaLWx

All four of them. We've been working on them since we went into production. I collect too & so it's important to me. https://t.co/1VlbeLtWi8

On Twitter, fans were quick to praise the new models—which look almost as cool as their real-life counterparts. On collectible news sites like Toy Ark, however, backlash was swift, with commenters deriding the film as part of the feminist agenda. The action figure for comedian Melissa McCarthy attracted the most directed criticism from moviegoers who felt she wasn’t funny.

But for fans who want to see women getting equal shrift in toy and collectible stores, Ghostbusters will deliver. Feig promised that Mattel wouldn’t be the only product-maker getting on board:

Mattel, Funko, Diamond Select & others making over 20 figures in all sizes & styles. Tons of other stuff coming too. https://t.co/FnHpG43z62

Personally, there’s already a place on my shelf for a Funko Melissa McCarthy figurine. With Mattel‘s female-designed DC Comics Super Hero Girls lineup and Hasbro promising to deliver 6-inch and 12-inch action figures of Rey later this month, it seems like 2016 could be a great year to visit your local toy store and grab some female action figures.