‘Ghostbusters’ reboot trailer is the most disliked in YouTube history

The trailer's dislikes have risen by more than 50,000 in one day.

The all-female Ghostbusters reboot is already earning some pretty coveted titles mere months before its release.

On Friday, ScreenCrush reported that the reboot’s trailer has acquired the honorable designation of being most disliked movie trailer on YouTube.

As of this writing, the Ghostbusters reboot trailer has at least 561,217 dislikes to its name—an over 50,000 dislike difference since the news was first reported. Comparatively, last year’s Fantastic Four trailer, which ScreenCrush also referenced, rose by just five dislikes in the same timeframe.

Featuring Melissa McCarthy, Kate McKinnon, Leslie Jones, and Kristen Wiig, the Ghostbusters reboot was met with unprecedented negativity long before the trailer was released last month. When the project was announced in January 2015, the internet’s finest (including our potential future leader of the free world) came out in droves against the film, alleging that director Paul Feig had ruined the reputation of the nostalgia-tinged classic by rebooting the film with a supposedly unfunny, all-female cast.

That isn't why we're upset, @jbouie. It's not sexism. It's loyalty to a classic movie that should not be fucked with. #inners #Ghostbusters

Over a year later, that overall sentiment appears to have changed very little. “Why are people whining about people disliking this because they are women? They are disliking it because it looks awful ,” one comment reads. “205,000+ Femenazi’s liked this Sony trash? Jeeze,” groans another commenter.

It appears that quite a few commenters also actively check to see how many dislikes the trailer has accumulated. One posted yesterday reads: “back here to check the dislike bar. Congrats everybody we finally got to 500k :) .”

On the movie’s Facebook page, users have even reacted negatively to the trailer with the “angry” emotion. 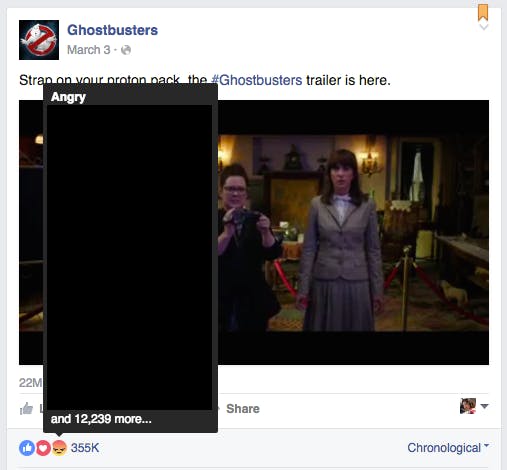 Reports have emerged alleging that this certain subset of angry Ghostbuster fans are using bots to artificially drive up dislikes on the trailer. Welp.

Here’s to hoping this Ghostbusters Internet revolt doesn’t grow to Gamergate proportions come time for the film’s release on July 15. Check out the trailer below.