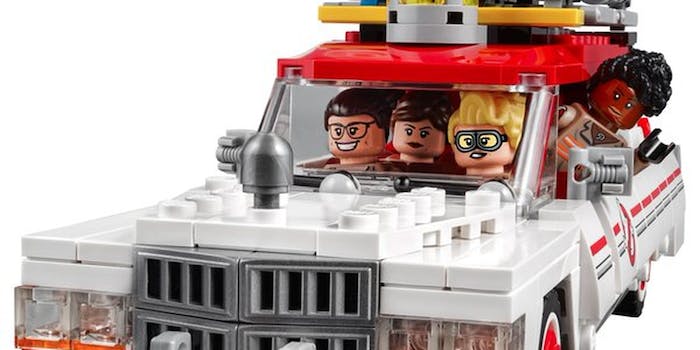 They ain’t afraid of no blocks.

Ghostbusters director Paul Feig promised fans last month that there would be plenty of toys and action figures featuring the female stars of his movie, and he kept his word with the latest reveal of Ghostbusters Lego sets.

Feig teased the toy announcement to his Twitter followers on Thursday, offering a first look at the Lego versions of Kristen Wiig (Erin Gilbert), Melissa McCarthy (Abby Yates), Leslie Jones (Patty Tolan), and Kate McKinnon (Jillian Holtzmann). Holtzmann is behind the wheel, and the gang is more than ready to do some ghost-busting in the Ecto-1.

More photos of the first official Lego set debuted online Friday at 11am ET, offering other views of the Ecto-1 car as well as Chris Hemsworth’s secretary Kevin on the Ecto-2 motorcycle.

The Lego sets also offer fans a small idea of the film’s plot, something Feig has been mum about up until now. A red Daemon is included in the set, and there are two versions of Kevin’s head: one with straight glasses and a smile, and the other with red eyes, tilted glasses, and an angry expression his face.

I know #LEGO isn't most accurate, but I'm guessing Hemsworth's #Ghostbusters character is possessed at some point pic.twitter.com/YxuXdXsOHs

The Ghostbusters set runs for $59.99 and will be available starting July 1. More toys will debut closer to the film’s release. But the central focus on the new Ghostbusters team is likely to come as a relief to people protesting the lack of merchandise for girls and women in other franchises. There won’t be any #WheresGhostbusters hashtags going around if Feig has anything to do with it.