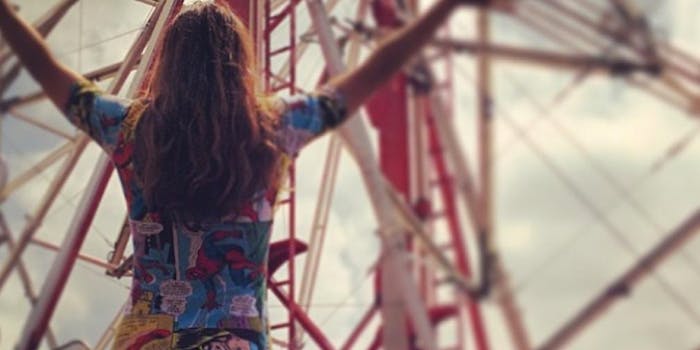 Over the last two months, Marvel has been steadily increasing its presence in the fashion world. In June the company announced a new licensing deal with online geek fashion retailer Her Universe, increasing apparel options for female fans. Then during San Diego Comic-Con it took part in the Her Universe geek couture fashion show where new products including a Loki-inspired dress were revealed. Now the brand has launched a new Instagram account named Styled By Marvel with the tagline “The official Marvel Fashion Instagram. Because you don’t need to *be* a Super Hero to look like one!”

The account already has over 5,600 followers and has only shared 10 posts so far. The photos include behind-the-scenes shots from the comic-con fashion show, everyday apparel, and more artsy lifestyle shots.

The account encourages fans to share their own Marvel looks using the hashtag #StyledByMarvel and many are jumping right in.

Considering the rise in popularity of geek fashion over the years, especially for women, it’s no surprise that Marvel would try to increase its presence in this area of lifestyle branding. SVP Marvel Licensing at Disney Consumer Products Paul Gitter told Pret-a-Reporter that the company wants “to show everyone that Marvel can be integrated into our daily lives by highlighting everyday fashion with a hint of Marvel.”

“We want to ensure that everyone sees Marvel not just as a film studio, but as a trendsetting brand that includes lifestyle products,” he said.

Gitter explained that their main posts—which will include trend reports, sneak peeks, and more—will serve their female fanbase “since they have been a big part of Marvel’s success.”

It’s a wise decision on Marvel’s part and as the first to make such a big push in the fashion arena they’re definitely getting everyone’s attention. Now fans will have to wait and see how the competition responds. Your move, DC!