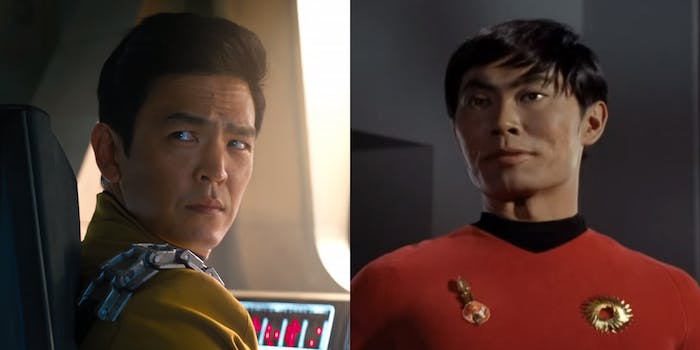 George Takei on Sulu being gay: ‘I think it’s unfortunate’

Of all the people we expected to be supportive, George Takei was on top.

Longtime Star Trek fans may be applauding after actor John Cho’s announcement that Hikaru Sulu’s character is “canonically gay” in Star Trek Beyond, but the original Sulu is not on board with the idea.

“I’m delighted that there’s a gay character,” George Takei told The Hollywood Reporter in a recent interview. “Unfortunately, it’s a twisting of Gene’s creation, to which he put in so much thought. I think it’s really unfortunate.”

Takei, who came out in 2005 and has been a passionately vocal LGBT activist ever since, explained that Roddenberry had crafted Star Trek‘s original characters exhaustively. Takei believes it is strongly against canon to make Sulu a gay character. He relates that he first heard of the idea when he spoke with Cho last year, which he argued against from the very start.

Takei received an email from Simon Pegg several months ago glowing with praise for Takei’s activism, which Takei found confusing under the circumstances.

“I really tried to work with these people when at long last the issue of gay equality was going to be addressed,” Takei said. “Months later, when I got that email from Simon Pegg, I was kind of confused. He thinks I’m a great guy? Wonderful. But what was the point of that letter? I interpreted that as my words having been heard.”

Takei also thought that the decision would make Sulu seem closeted in the Star Trek timeline. While a valid concern, Star Trek Beyond is a prequel to the original Star Trek, meaning that Sulu’s sexual identification would be clarified far before Takei’s version of his character was introduced.

In a Friday statement to The Guardian, Pegg said that he respectfully disagrees with Takei’s take on Sulu, explaining that he, Justin Lin, and Doug Jung loved the idea of introducing a character the audience already knew as gay because they already had a unprejudiced view of that character.

“Also, the audience would infer that there has been an LGBT presence in the Trek Universe from the beginning (at least in the Kelvin timeline), that a gay hero isn’t something new or strange. It’s also important to note that at no point do we suggest that our Sulu was ever closeted, why would he need to be? It’s just hasn’t come up before.”

Fans are sharply divided over the conflict between the actors. Some feel strongly about Takei’s points, while others are thrilled to see headcanon transformed into reality.

Cho's Sulu is not Takei's Sulu so it's ok for Cho to make the character his own, but it doesn't retroactively inform Takei's work.

#GiveMeHopeInFiveWords Sulu is a gay dad

Roddenberry may have envisioned Sulu as a lonesome heterosexual that put fierce loyalty to his work and crew above all, which is an ideal archetype of the era he was conceived in. But as the saying goes, they times they are a’changin’.