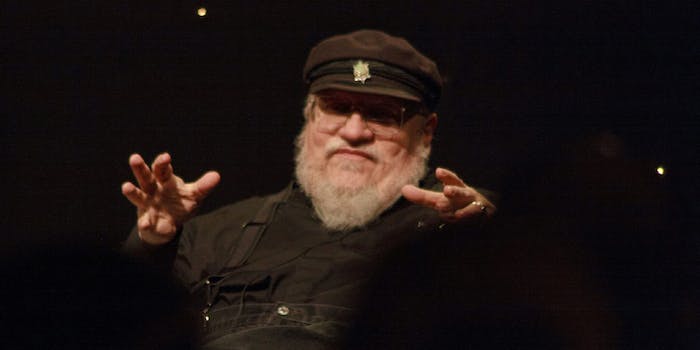 Martin, who has long sought to turn this fantasy novella into a series, is howling in excitement.

Another one of George R.R. Martin’s works may be on its way to the small screen—and no, it has nothing to do with those movie rumors.

Martin announced over the weekend that HBO’s sister network Cinemax has optioned a pilot script for a show based on his novella The Skin Trade, which he wrote in the late 1980s, years before he started A Song of Ice and Fire. Kalinda Vazquez, who previously wrote for Prison Break and Once Upon a Time, will write the script.

The Skin Trade, which Martin described as an “offbeat ‘werewolf noir’ novella,” follows private investigator Randi Wade as she investigates a serial killer who takes the skin of his or her victims. Wade and her friend Willie Flambeaux, a collections dealer who also happens to be a werewolf, will “discover a dark secret behind a series of grisly murders in their decaying industrial city.”

Martin originally published The Skin Trade in Night Vision 5, the fifth iteration of an annual horror anthology. It eventually won the World Fantasy Award. While the original version is out of print, the graphic-novel version is still available.

While ASOIAF was thought to be unfilmable before Game of Thrones became such a massive hit, Martin had always envisioned seeing The Skin Trade make it to TV or film. He first tried to make it happen in 1991.

Of course, just because Cinemax has ordered a script doesn’t necessarily mean that it will pick up the full series.

“This being Hollywood, of course, you never know where things will end,” Martin wrote, “but if they like the script, we’ll shoot a pilot, and if they like that, hey, who knows, maybe we’ll get a series on the air.”

While Martin will undoubtedly have some role on The Skin Trade if Cinemax picks it up, he lamented that he wouldn’t be able to write the pilot script or run the show.

“That was never really in the cards,” he continued. “I have this book to finish. You know the one.”