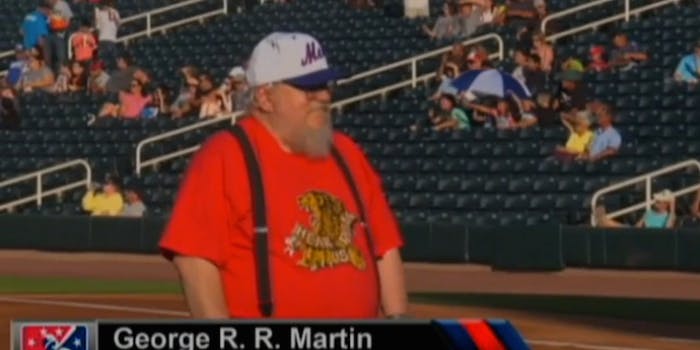 George R.R. Martin throws out first pitch like a boss

He starts off the battle with a ceremonial first toss of the leather-clad ball.

George R.R. Martin celebrated the end of Game of Thrones by taking part in an American tradition: throwing the first pitch at a minor league baseball game.

He started off the Battle at Albuquerque with the Isotopes and Zephyrs facing off with the usual ceremonial fare: a first toss of the round, leather-clad ball to the soldiers carrying the wooden weapons.

It’s not a complete 180 for Martin. A major sports fan in his own right, he supports the New York Giants and New York Jets and he’s named minor characters after Patriots coach Bill Belichick and a Dallas fan who owned a fantasy site. Both of them suffered gruesome deaths.

Clad in both a Lannister shirt and a Mets cap, he truly knows the meaning of pain as he goes to mark the start of the battle.

While we can’t actually see how well the pitch did, it was probably still better than 50 Cent’s—and it’s probably safe to say he didn’t kill anyone with it.