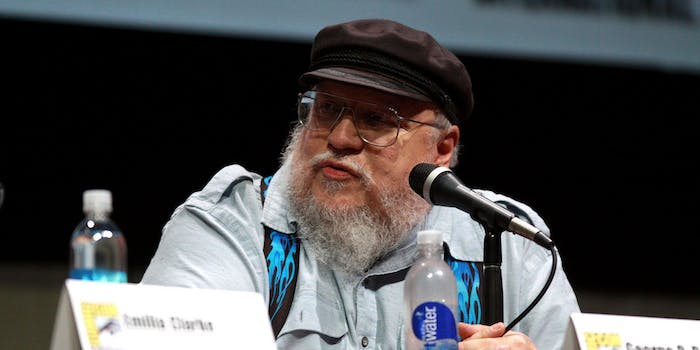 The author's answered one question so many times that he's finally done answering it properly.

A Song of Ice and Fire author George R.R. Martin is tired of getting the same questions from journalists, but one in particular really grinds his gears.

Between Comic-Con, where he joined the Game of Thrones cast on the show’s panel, the Edinburgh Book Festival, the Emmys, and a hodgepodge of other interviews and talks, Martin has been busy the past few months in order to free up his schedule to write later in the year. Everywhere he went, he did multiple interviews with journalists all over the world. But enough is enough, and he’s finally speaking out.

“They would park me in a hotel suite, usher in a journalist or a film crew, we’d talk for a half hour, then my hosts would escort that reporter out, and bring in a new one,” Martin wrote. “Some journalists were very sharp. Some… ah… weren’t.”

Interviews came from outlets and journalists who likely had varying degrees of knowledge on his books and Game of Thrones, as did the audience. Authors and celebrities are often asked the same questions, but Martin’s had enough of people asking him who his favorite character is.

In case you’ve missed it in the many press interviews he’s done as of late, he spelled it out for you and any reporters who may talk to him in the near future.

(Tyrion is my favorite character. Okay? OKAY? Can we PLEASE put that one to rest?? I love all my viewpoint characters, Arya and Sansa and Bran, Jon Snow and Brienne, Arianne and Cersei and Jaime, Theon, even Victarion and the Damphair, ALL of them, but I love Tyrion the bestest. Tyrion son of Tywin, the Imp, second son of Casterly Rock. How many bloody times do I need to say it?? I swear, from now on, whenever anybody asks me, “who is your favorite character,” I am going to start naming characters from other people’s books. Cugel the Clever. Flashman. Gatsby. Solomon Kane. A different one each time… )

So, Tyrion’s his favorite. Got it, everyone? Good.

It’s not the first time Martin called out the media. During an interview with the Swiss newspaper Tages-Anzeiger in July, he flipped off the camera and said a big “fuck you” to the people who speculated about his mortality.

Martin further drew the point home in his most recent blog post by talking about changing his favorite character to mess around with journalists. Like many readers, he has many favorite characters from the vast number of books he’s read over the years, and he’s finally starting to share them. Here, he directed fans and readers toward one of the most famous American novels of 20th century.

Martin is now back in Santa Fe where he’ll focusing on his next book—when he isn’t trolling the media.