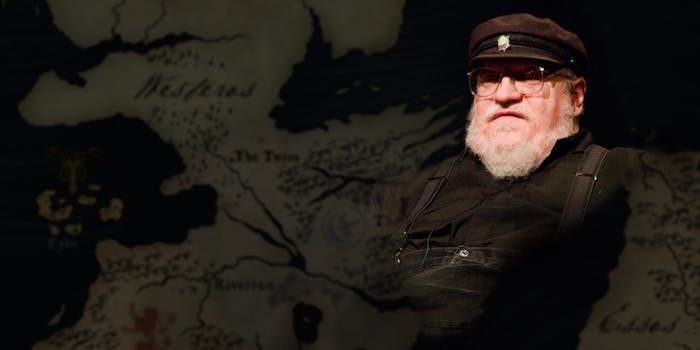 How George R.R. Martin would survive a zombie apocalypse

You know nothing, Rick Grimes.

George R.R. Martin knows a thing or two about surviving a winter in the unforgiving world of Westeros. He has a few ideas for surviving the zombie apocalypse, too.

Like the rest of us, the Game of Thrones author has binge-watched The Walking Dead. (He said he watched up to 14 episodes in a row.) As a consumer of medieval history, Martin has stumbled upon a rather brilliant solution for how to survive the apocalypse and the oncoming Walkers.

“Castles!” he told Entertainment Weekly. “Whatever is happening in the United States during The Walking Dead, I’m sure they’re a lot better off in England because they’re in castles.”

If they had any brains, they’d go to the existing castles and reinforce the walls. They can patrol on the bulwarks. No way is a zombie [getting through]—medieval seige [sic] armies couldn’t break castles with conventional artillery, and zombies don’t use artillery. Zombies don’t build trebuchets. They don’t build siege towers. There is no way they can break into a well-defended castle.

Of course, that’s up for debate depending on how well the actual barrier around the castles works. If the barrier (like the people defending it) is weak, then the castle will eventually fall.

Along with giving us an idea of how the British monarchy presumably survived the initial outbreak, Martin’s suggestion offers an entirely different side of Robert Kirkman’s world we haven’t seen. And some creative liberties, too. (For one, where are you going to find a castle in the U.S.?)

Martin didn’t touch on one major advantage in the castle zombie defense plan: weapons. Bullets work just fine for killing zombies, but bullets run out. Just sharpen the blade and you’re all set to go out on another slaying run.

But surviving the Walkers is one thing. Surviving the humans you’re with—as proved time and time again on The Walking Dead—is another.