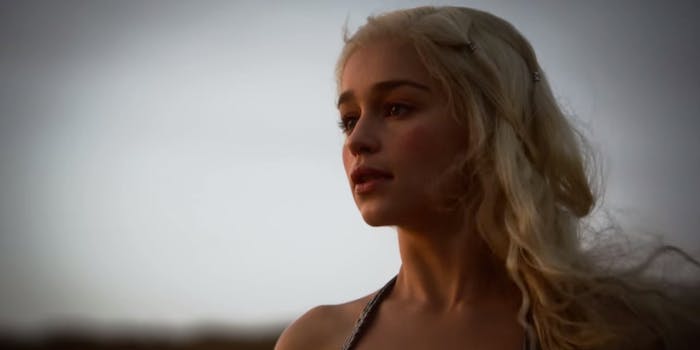 George R.R. Martin: Fans have already figured out how ‘A Song of Ice and Fire’ ends

Loads of fans are still stumped, but one or two of them have it figured out.

Some fans have already guessed how A Song of Ice and Fire—George R.R. Martin’s series of books in which Game of Thrones is based on—even though Martin has yet to complete them.

These fans don’t have any exclusive knowledge of the books from Martin by any means, but rather, the fans have simply gotten it right with some of their conspiracy theories. And while he hasn’t hinted at which ones are correct and which aren’t, he has said that he no longer goes onto fan forums because he hated seeing the fans getting it right.

Martin spoke at the Edinburgh International Literary Festival where he discussed fans’ wish for him to put more gay sex scenes in the books and wrestling about whether to change his original story plan.

For Martin, he never wanted to tell a predictable story (just see the books he’s already put out) because he hates predictable stories, but then some astute fans got it right.

“So many readers were reading the books with so much attention that they were throwing up some theories and while some of those theories were amusing bulls— and creative, some of the theories are right,” he said. “At least one or two readers had put together the extremely subtle and obscure clues that I’d planted in the books and came to the right solution.”

After debating about whether to change what he planned to do, he ultimately decided against it in part because he already had too many subtle hints in his books to change course. And while the theories might flow freely on the Internet, not all of his fans are part of that community and remain unaware—especially with the ending floating around somewhere online.

And whatever he still has planned is sure to shock a lot of people.

“Some of my readers who don’t read the boards, which thankfully there are hundreds of thousands of them, will still be surprised and other readers will say: ‘see, I said that four years ago, I’m smarter than you guys,’” he said.

The ending of ASOIAF is out there, guys. We just have close to 20 years of theories to sift through to find it.