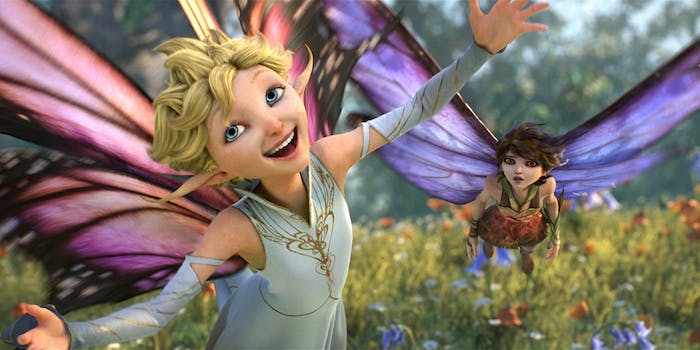 Lucas set out to make a "beautiful" fairy tale, and it looks like he did.

The first trailer for Strange Magic debuted on Yahoo Movies Friday and gives us a better look at the beautiful animation style we can expect in the film.

“[Lucas] really wanted to make a beautiful fairy tale with goblins and elves, and do it in a way that only this company can do. He had been working on it for a long time,” Strange Magic director and longtime Lucasfilm employee Gary Rydstrom said in an interview with Yahoo Movies.

The story will revolve around two worlds, one a magical kingdom and the other a mysterious dark forest. Normally the residents of each don’t mix but that changes when forbidden love potions are let loose—which is not a surprise considering the movie is inspired by A Midsummer Night’s Dream.

Rydstrom told Yahoo Movies that “Lucas often emphasized that the story should be about ‘finding beauty in strange places.’”

Throughout the trailer you can hear snippets of the pop songs that will be included in the film as well, though they sometimes feel a bit out of place with the stunning fantasy animation.

Looooove the trailer for #StrangeMagic! Can't wait to see it in January and sing along to the songs! http://t.co/fneWc7IhJa