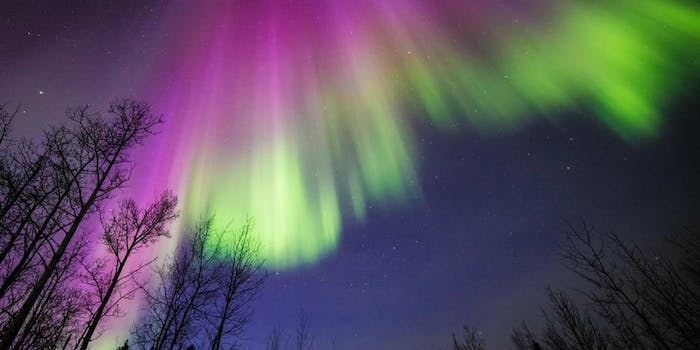 You can thank extra-powerful solar winds for these beautiful photos of the aurora borealis.

A geomagnetic storm hit Earth on Wednesday night, resulting in an unusually powerful example of the aurora borealis, or Northern lights.

People across the world were able to see the beautiful aurora, caused by a burst high-speed solar wind, lighting up the night sky.

The aurora’s unusually high level of visibility is the result of a “coronal hole” in the sun that allows the solar winds to shoot directly toward Earth. Once these winds hit Earth’s magnetic field, they create geomagnetic storms, which are visible in the form of auroras and can sometimes interfere with satellite equipment.

According to the U.K. weather service, the Met Office, this period of visible aurora activity is expected to last for several weeks.

“The season of the year has an influence,” the Met Office explained. “The science behind this is not fully understood, but the two equinoctial periods in spring and autumn tend to produce an increase in aurora compared with winter and summer.”

The geomagnetic storm means that the aurora is visible far closer to the equator than usual, possibly as far South as Oregon, Pennsylvania, and Iowa. If you live around that longitude and are far enough from a city to avoid light pollution, you have a pretty good chance of seeing the Northern lights sometime in the next two weeks.