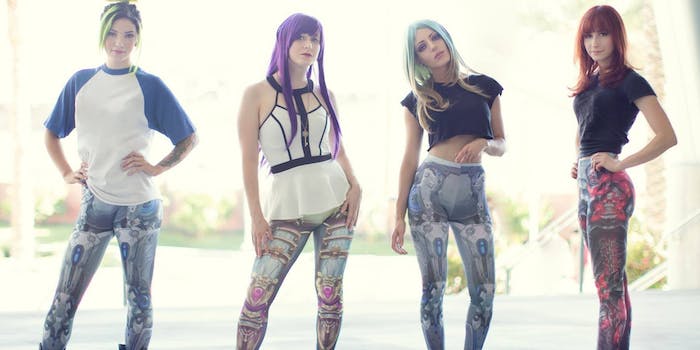 Do you wish you could suit up in your favorite video game character’s armor and still be able to comfortably go about your day? A new company called Geekweave Clothing is hoping to help you achieve that goal with a little help from Kickstarter.

Geekweave Clothing describes itself as a “fashion brand bringing to life original artwork inspired by video game armor and cosplay.” The company started a crowdfunding campaign this week in an effort to raise money to produce its first line of armor leggings. The leggings feature three different designs: Satina Paladin, Skull Reaver, and Mecha.

Geekweave Clothing founder Stan Chan told the Daily Dot he was inspired to start the company by his “love of art, video games, and even a little bit of fashion!”

“I work in the entertainment industry as a concept artist, but wanted to channel the love that I had for all these art forms into something unique and shareable with others,” he said. “ While I was doing some video game texture painting, it literally dawned on me that I could apply these skills to leggings. I thought it was a really cool idea and went with it!”

Chan created all the original art seen on these three initial products. For these designs he took inspiration from sci-fi and fantasy games like World of Warcraft, Starcraft, League of Legends, and Final Fantasy.

Leggings have become a popular over the years, especially in the geek fashion arena. Among these products are an increasing number of armor- and mecha-inspired leggings created by various companies. Chan said he hopes to stand out from the rest with his original art.

“There’s definitely inspiration from popular games in them, but for the most part, I’m tapping into the genres/character costuming that we identify with in order to create something a bit more unique. Also, I spend quite a deal of time per design and hope to do more!” Chan said.

The designs are impressive and if Geekweave is able to get off the ground with this Kickstarter it could lead to some fun new products in the realm of video game-inspired fashion. The crowdfunding campaign has so far raised about $9,000 of its $15,000 goal. It will end on Feb. 11.