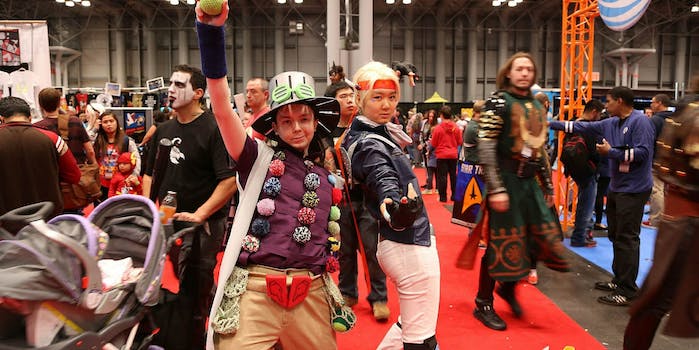 Brace yourself for this weekend’s geek convention explosion

From Seattle to New York, it's time to get your geek on.

We’re not sure which nerdy god decided the second weekend in October would be the perfect time to host three major fan conventions at once, but until human teleportation and/or cloning become a reality we’ll just have to accept this week’s major geek dilemma: Attend New York Comic Con, the Vlogbrothers‘ brand-new NerdCon in Minneapolis, or Geek Girl Con in Seattle?

If you’re a con-goer, then your geographic proximity to each con, or any of the smaller geek conventions happening around the country this weekend, might be the deciding factor in where you end up. (Unless you have the means and the stamina to hop on a jet to hit each con for a day or two between Thursday and Sunday.)

Also, one of these cons, NYCC, is much, much bigger than the other two. But each con is significant, and each offers something distinctive in the geek con landscape. Here’s a breakdown of what each con is—and why you might see geek news being made from made coast to coast this weekend. If you’re in the Empire State, it’s hard not to notice that New York Comic Con is now the biggest geek convention in the land—at least until San Diego expands its convention center.

NYCC is a four-day con that kicks off today. It’s primed for comics lovers, full of lots of emphasis on comics and graphic novels and chances to meet and geek out with denizens of the industry. DC in particular will be headlining its upcoming Dark Knight III sequel to Frank Miller’s legendary Dark Knight Returns. This year, however, many of the biggest panels will be devoted to entertainment media—especially Star Wars Rebels, Game of Thrones, and anime franchises Naruto and Attack on Titan, the former of which will be appearing on the main stage.

As for our must-see panel picks, Thursday’s Twilight panel with Stephenie Meyer should be a must-see for fans celebrating that franchise’s 10th anniversary—not to mention her surprise new book. Be sure to hike over to the Hammerstein Ballroom for the Mr. Robot panel on Friday, then back Saturday morning for the premiere of Boruto, the highly anticipated Naruto sequel. Check out the Clueless reunion panel Saturday afternoon, and get up early for Sunday morning’s panel winner: a combination of Goosebumps and The Babysitter’s Club.

NYCC also has a diversity track running throughout the con (visible on the schedule if you view by tracks). Among the many worthy panels on this track, be sure to check out one of Thursday’s two morning panels on hip-hop in comics and diversity in comics, Friday’s queer manga panel and the Asian-American comics panel featuring artist Greg Pak, and Sunday afternoon’s look at portrayals of mental health in comics.

Now in its fifth year invading downtown Seattle, the two-day Geek Girl Con has grown exponentially and now is threatening to sell out its roughly 6,000 tickets. Geek Girl Con is a lot more high profile than other cons of its size thanks to its strong Twitter presence and notable recurring guests like Anita Sarkeesian. Though Sarkeesian won’t be a headliner this year, there will be plenty of geeky feminist programming, with an emphasis on gaming and issues in geek culture.

On Saturday, check out “Ladies Who Let’s Play” and “Beyond Fanfiction Live: Fandom in Performing Arts,” and be sure to head downstairs to the game play area, including the “Late Night Nostalgia Mystery Tournament.”

On Sunday, take your tech-inclined geek to “Everything You Want to Know About STEM Careers But Are Afraid to Ask,” and then stick around for “Stealing White People’s Superheroes” and “Nah Babe, it’s just the wind: The Validation of Women’s Fears in Horror.”

And for all you slash fans, check out the slash and fanfic meetup being hosted by Three Patch Podcast on Saturday night. John and Hank Green’s midwest geek mecca may be the newest convention on the nerd scene, but NerdCon is already a destination. Through the star power of its YouTube celebrity founders—the same siblings who founded VidCon and grew it into a massive community gathering and media industry event—NerdCon has attracted big names from across the Young Adult publishing landscape, as well as appearances from Welcome to Night Vale, the Harry Potter Alliance, and various performers like Paul and Storm. If this all sounds suspiciously like the target demographic of summer’s Geeky Con, the fandom con recently formed out of the Harry Potter Leaky Con convention, that’s because there’s considerable overlap in the spheres of Harry Potter, Young Adult publishing, and the Vlogbrother’s Nerdfighter fanbase. But that also means NerdCon, even in its first year, hasn’t had to look far for talent.

NerdCon is meant to start small, with just two days of formal programming for about 2,000 people. Its theme this year is “Stories”—hence the emphasis on writers. If you’re going, check out “Connecting through stories: Communities and Fandom” and the afternoon of main stage discussions about stories and what they mean in the age of the Internet and remix culture. On Saturday, check out the Return of Serial Storytelling and a performance by the Night Vale-flavored crew of Neo-Futurists behind Too Much Light Makes the Baby Go Blind.