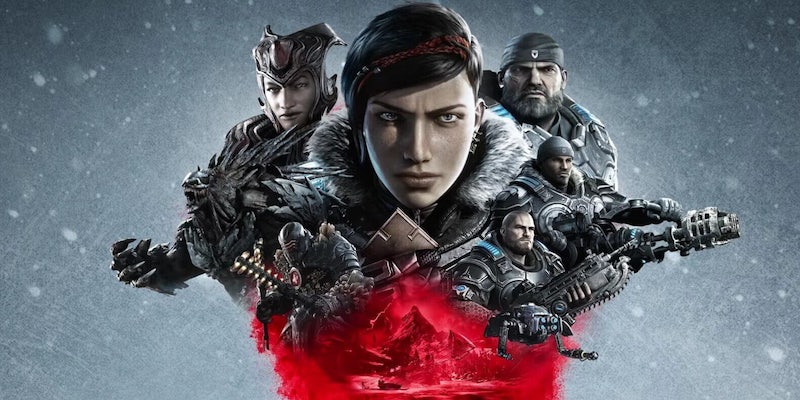 Review: Change is for the best in ‘Gears 5’

Thirteen years in, Gears of War still has steam.

There is no Gears of War 5.

Starting with a new naming convention, Gears 5 announces itself as a departure from the familiar. Where 2016’s Gears of War 4 demonstrated how the Coalition could step into the shoes of past developers, the latest entry seeks to reinvent an aging franchise. Things seem consistent on the surface; the game is filled to the brim with over-the-top gore and gaudy character models. But after a few hours, Gears 5 grabs the wheel and sends the series careening down an unexpected path. In every narrative risk and gameplay innovation, Gears 5 builds on an impressive legacy with tremendous achievement.

This story continues the strained stakes set in the previous chapter. The Locust threat has been eradicated, but a more dangerous force that may or may not have been caused by human interference has emerged. Iconic hero Marcus Fenix and his estranged son JD are on good terms (for now). But the most alluring piece of this puzzle, relative newcomer Kait, takes center stage.

Kait’s connection to the antagonistic Locust served as a “gotcha!” moment for Gears 4’s cliffhanger ending, but the stinger has become a central focus of how these characters engage with each other—and the world around them.

The most immediate—and impressive—distinction in Gears 5’s presentation comes to life through upfront world building. Nuggets of lore or character beats that would have been relegated to in-game text or hidden as easy-to-miss collectibles in the past are pulled to the foreground here in a way the makes every action that much more compelling.

As someone with a vested interest in this world, I loved hearing COG officials talk about the bureaucracies and programs put in place to encourage them to have more children and repopulate the planet Sera. I loved watching civilians skitter away from my squad as we rolled into their quiet town. Gears of War games have never reacted to the player in this fashion, acknowledging that a civilization exists outside of the momentary set pieces that call for the tragic destruction of entire cityscapes.

The environmental variety of Gears 5 is astounding as well. Gone are the days when Gears was just a drab third-person action game full of muted browns and sickly gray corridors. Even in the ramshackle steel settlements of a post-apocalyptic society, there is diversity. One exemplary sequence takes place in an abandoned theater, toying with a macabre humor that feels effortlessly woven into the militaristic overture of the early chapters.

A grounded campaign with more presence from non-playable characters gave me flashes of a series like Fallout and Mass Effect. There’s chatter and detail that even add vibrancy to sections without any shooting. Gears 5 begins with a few missions that bank on established beats and shooting galleries, and while it all works, what comes next sets a new standard for the franchise.

For a bulk of the campaign, players explore two large chunks of open landscape. Thanks to a speedy vehicle called the Skiff, Kait digs deeper into the intertwined history of the COG and the Locust. With an intimate narrative and expansive gameplay options, the entire affair feels distinctly different from past Gears games. There are sidequests, upgrades, and computer-controlled teammates that consistently keep the game from feeling repetitive.

However, this is still the same franchise where it counts, with remarkably responsive combat mechanics. The action in Gears 5 doesn’t do much to fundamentally alter the run-and-gun cover shooter at its core, but a constant stream of new weapons and challenging enemy encounters kept me on my toes after several hours.

This time around Jack, your AI companion, is a functional ally in combat. They can stun enemies, heal teammates, and retrieve weapons from across the battlefield. Having this extra layer to track on top of the often-explosive arenas allowed me to approach every encounter differently. The presence of a skill tree to consider made me feel like I was building a specialized loadout as I progressed through the story, not just brute-forcing my way down a bloody warpath.

Through abandoned laboratories, across icy fields, and through a volatile desert, Gears 5 never loses momentum.

The adrenaline-fueled gameplay carries over into the series’ largest multiplayer suite ever. Traditional Versus playlists return, with newcomer-friendly Arcade setting and hardcore variations as well. The cooperative focus of Horde mode is largely reminiscent of the previous installment, with most of the new ideas rooted in the three-player Escape. The objective here isn’t as simple as defeating waves of incoming foes; it requires coordination and planning between teammates.

All these playlists support multiple skill levels, with difficulty options and accessible matchmaking. Whatever you’re looking for out of competitive Gears, you’ll find it here. Similarly, the level to which players can tweak their loadout (weapons, skins, character appearance, and more) is staggering; it’s built on an in-game economy that’s only as intrusive as you allow it to be. Tangible progression isn’t blocked in any meaningful capacity, and there are frequently rotating opportunities to earn rewards.

Overall, I can’t imagine anyone walking away from Gears 5 disappointed. This is a complete package, tied together with some of the most consistently engaging gameplay you could ask for. The storytelling on display proves that the franchise has yet to peak, and it lays the foundation to continue improving with whatever comes next.

Gears 5 is available for PC and Xbox One on Sept. 10. This review was written based on a version of the game played on Xbox One S.