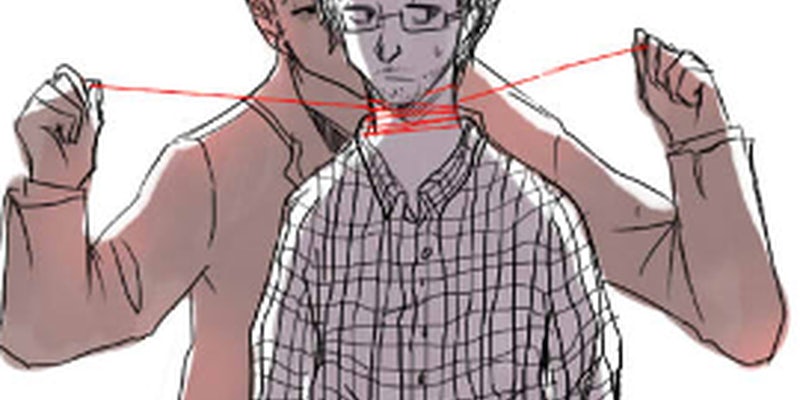 According to some Hannibal fans, it's OK to love and empathize with a cannibalistic madman—but it's not OK to make him gay.

The show has been on the air for only a week, but already it’s taken a bite out of the Hannibal Lecter fandom—or at least the part of the fandom that happily indulged in the romance of Hannibal and FBI detective Clarice Starling before NBC came along and flooded their community with male/male slashfic.

“People who ship Will/Hannibal need to stop,” wrote loyal Hannibal/Clarice fan thecarnalcannibal on Tumblr Thursday, speaking to the influx of slash fans who flocked to the NBC show because of the chemistry between stars Mads Mikkelsen and Hugh Dancy. “It ruins the story. The romance is particularly Clarice/Hannibal. … Hannibal is not queer.“

Thecarnalcannibal didn’t stop there, however. She went on to renounce fans whose delight in Hannibal’s gay exploits might be scarring unsuspecting children.

There are minors on this site who particularly don’t want to see that on here. There aren’t any vulgar Clarice/Hannibal pics, so why make Hannibal/Will pics. By ‘minor’, I mean minor enough to see that there’s something wrong with nude art of Hannibal ships.

The Hannibal Lecter fandom has been going strong since Red Dragon, Thomas Harris’s first novel about the iconic psychiatrist turned serial killer, debuted in 1981. Like every die-hard fanbase that starts with a book, it’s often pitted book fans and movie fans against one another in a fandom superiority battle. But if there’s one thing fans have historically been able to agree on, it’s celebrating the iconic duo of Hannibal and Clarice Starling.

Immortalized in the dual-Oscar-winning dynamic of Jodie Foster and Anthony Hopkins in the 1991 thriller Silence of the Lambs, Hannibal/Clarice is so popular that it even, creepily, became a pairing that actually happened in the controversial sequel, Hannibal.

But before he played mind games with Starling, Hannibal locked horns and eyes with a serial killer profiler named Will Graham. In NBC’s new series, well-known Brit Hugh Dancy plays Graham, and the word from fandom is that he has all kinds of chemistry with Mads Mikkelsen’s enigmatic Hannibal. Slashers—the male/male fanfic-writing kind, not the teen slumber-party murders kind—are already coming out in droves for Hannibal/Graham, or “Hannigram,” as fans have dubbed the obligatory ship portmanteau.

But when criticized by many members of the Hannibal slash fandom, thecarnalcannibal stood by her opinion as being “solely [based] on the books.”

Realistically, it should be interpreted as a mentor/student type of relationship where a student learns from his mentor. That is what Hannibal strives to be, does he not? He’s been a mentor to the serial killers that his students, Will and Clarice chase. That’s typically all he is, not a surrogate lover.

Even sidestepping the fact that Clarice was allowed to be the student who ends up with the teacher in this scenario, there’s plenty of precedent to read Hannibal the Cannibal with a bent. The trope of pairing male homosexuality with serial killing is a tried-and-true staple of the celluloid closet that has been simultaneously used both to demonize gay men as well as to illicitly explore queer identity and repressed male sexuality.

A queer reading of Hannibal may not come from Thomas Harris, but it does come straight from the annals of film and pop culture, in everything from Leopold and Loeb to Poppy Z Brite. Patricia Highsmith’s iconic queer serial killers Bruno Anthony and Mr. Ripley were immortalized in Hitchcock’s Strangers on a Train and the Hitchcock-flavored Talented Mr. Ripley. Al Pacino’s turn in William Friedkin’s notorious but fascinating Cruising is all about sexual exploration disguised as a quest to catch a gay serial killer; and nearly all serial killer narratives, from Dexter to Death Note manifest a subtext-laden psychological double for the killer, often the detective trying to catch them.

It’s from this long and grisly line of serial killers with hefty amounts of subtext that the impulse to slash Hannibal springs. But considering the multiple layers of controversy surrounding the relationship between Hannibal and Clarice, not to mention the fact that he eats people, it’s difficult to see how queering Hannibal could possibly be any creepier or more disturbing than leaving him alone. “If you don’t like the ship that’s your deal but let’s not pretend that Hannibal and Will having sex is or would be worse than the content of the show itself,” stated Tumblr user Croik in response to the kerfuffle.

Even apart from the whole ‘think of the children’ mentality, the fandom has already proved to be strangely divided, with some expressing dislike over the diversity of the cast, and others lamenting that the focus is currently on Red Dragon–era Hannibal, which doesn’t feature Clarice.  “I miss when the related tags on the hannibal lecter tag were anthony hopkins, clarice starling & silence of the lambs,” wrote lecterphan recently.

Tumblr user thebkwyrm told the Daily Dot that she felt this larger disconnect between the old fans and the new fans, the book fans, the movie fans, and now the television fans, was the real heart of the issue. “I think [queering Hannibal] was less an issue than Lecter interacting with anyone not Clarice in a way that doesn’t end with death and him eating their internal organs,” she said.

But whatever the cause, as the popularity of Hannibal heats up, it may be in fans’ best interests to eat their differences with some fava beans and a nice chianti.