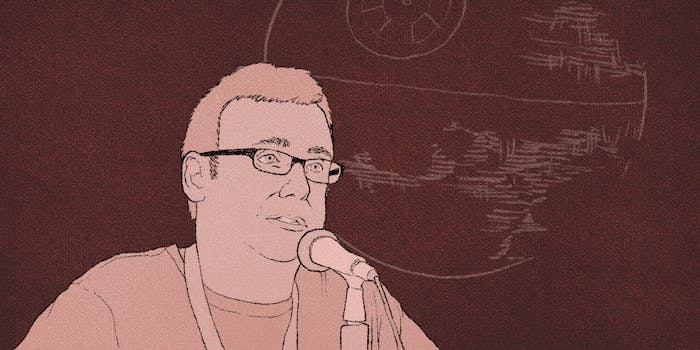 The screenwriter and video-game veteran debuted his first novel in February.

Gary Whitta’s career may have started in video games, but he’s become perhaps best known for his work as a screenwriter. Whitta wrote the screenplays for The Book of Eli and After Earth. He most recently completed work on the highly anticipated Star Wars spinoff film that is set for release on Dec. 16, 2016. Whitta’s next film project will be an adaptation of Mark Millar’s comic book series Starlight.

In February Whitta expanded his writing credits even further to add novelist to his resume. His very first book Abomination is now available for pre-order on Inkshares and set for a May 2015 release. Combining history, fantasy, and monsters, Whitta’s 400-page novel will be available in hardcover and as an ebook. You can read an excerpt of the book on Inkshares now.

We recently spoke with Whitta over email about Abomination, his latest projects and his work for Telltale Games.

Your first novel, Abomination, is now available for pre-order. Why did you want to write this historical-fantasy book? What inspired the story?

I’ve always wanted to write a good old-fashioned monster story, but in a way that hopefully would put a new spin on a well-worn genre. And as a Brit, I’ve long been fascinated by the history of ancient England, so I thought it would be a really cool idea to mash up historical fiction and fantasy by inserting magic and monsters and other things that you might expect to see in a book like Game of Thrones or The Lord of the Rings into a real historical time and place. In this case, during the Viking invasions of England and the reign of Alfred the Great.

How long have you been working on the book? Did you take a lot of time to do research or was more of your time spent writing and revising the novel?

I worked on it mostly as a hobby project whenever I had free time between my regular work as a screenwriter, so it took about three years on-and-off. There was one point right in the middle where my daughter was born and I didn’t have time to work on it for about six months, and for a while I was worried that I’d never get back to it. When I got the job writing for the Star Wars movie I just knew that once that started I’d never get back to the book, so I made sure I got it finished before I started on that film. 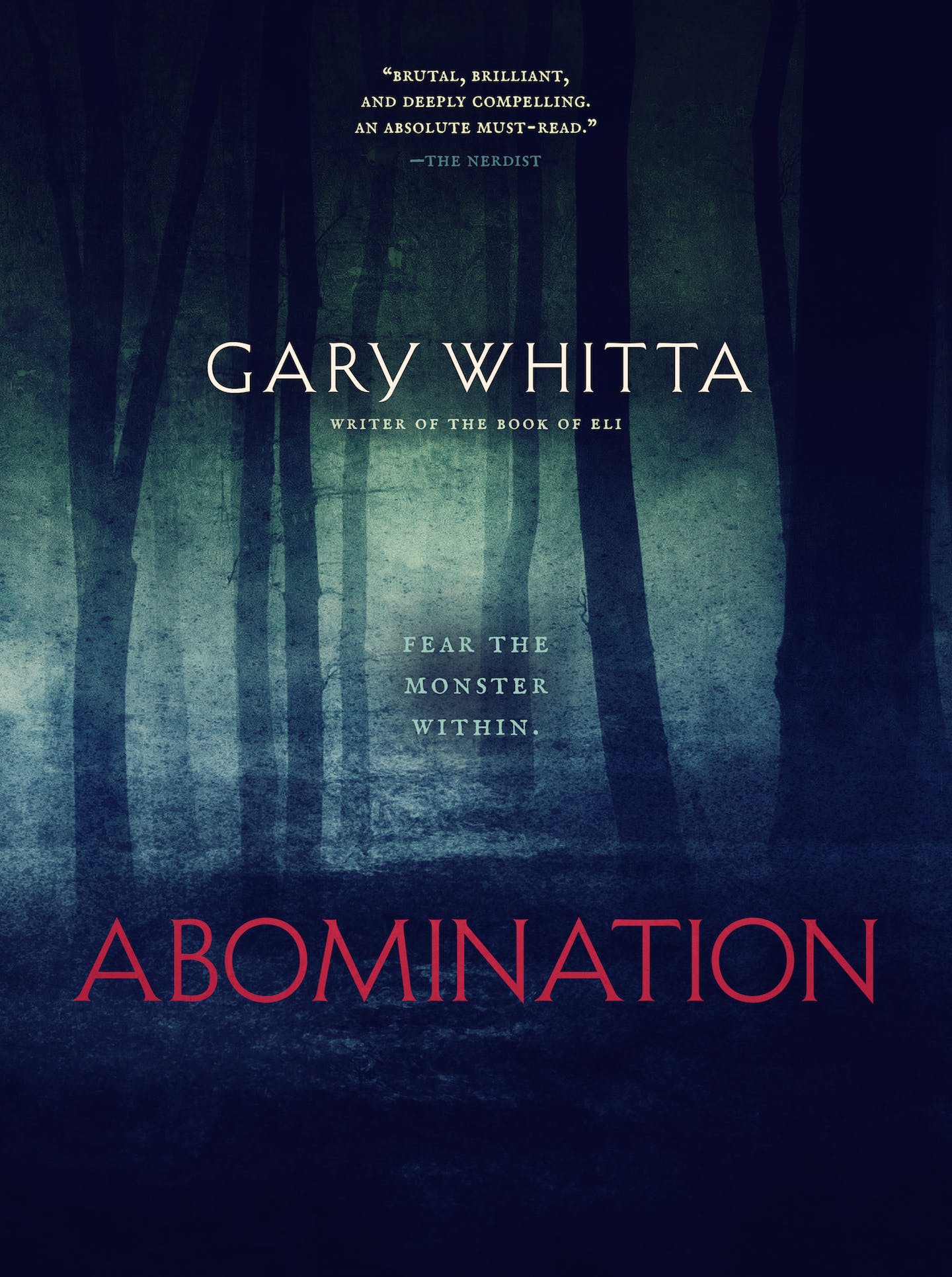 You’re publishing the book through Inkshares. Why did you want to use the website to publish your first book?

Inkshares is kind of like Kickstarter for books, it’s crowdfunded publishing, and I really like that approach of letting the audience decide what books they’d like to see published rather than a handful of traditional editors and gatekeepers. It’s a much more democratic way of doing it, and since Abomination was funded so quickly—in less than 24 hours—that’s really encouraging because it means there are a lot of people out there who are really keen to read the book.

What can readers expect when they pick up your book? Is there anything in particular you hope people walk away with after reading it?

Well I hope they get a good old-fashioned page-turner in the tradition of the old monster movies and horror stories that inspired it, but beyond that it hopefully speaks to something a little deeper about the human condition. There are characters in the book who are capable of doing amazing, superhuman things, but what really sets them apart, what really makes them heroic, is the fact that they embrace simple human values like kindness and charity and mercy, especially during a particularly dark period of English history when those qualities were not easy to find.

You had the chance to work on the first announced Star Wars standalone film. What was that experience like for you?

It was amazing, but it’s going to be a long time before I’m allowed to talk about it. I’ll just say that it was by far the most amazing creative experience I’ve ever had, for a kid who grew up inspired by the original Star Wars films it was literally a dream come true.

Did any of your favorite aspects of other Star Wars films influence your work on this spinoff or stay in the back of your mind as you were writing the script? If they did, what were they?

Well I think the Star Wars movies are grounded in a classic tradition of mythical storytelling that informs all of us as writers, no matter what we’re working on. They became so successful in part because they speak to something universal, the potential hero inside all of us.

Is there anything else you can tell us about the film? Anything you can tease?

Nope! Ask me again after the movie is out :) 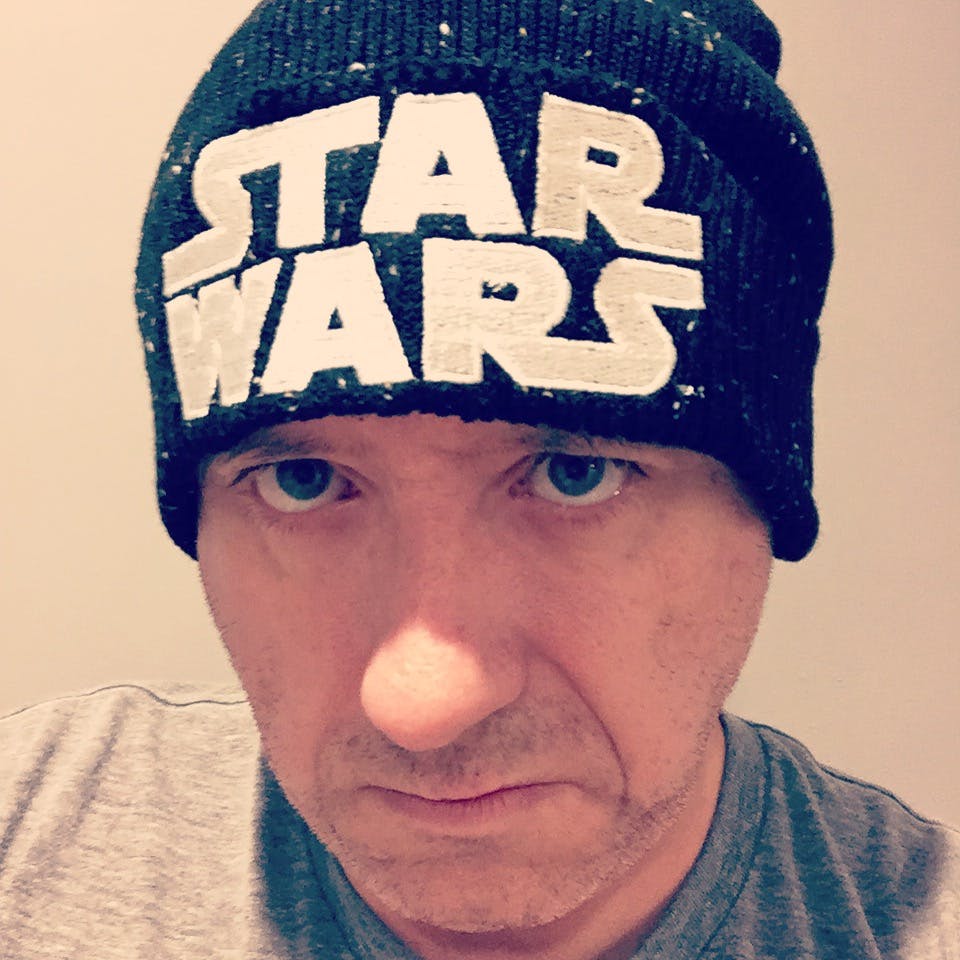 Having worked in this new era of Star Wars, is there anything you want to say to fans who might still be worried about the franchise being under new management?

Star Wars is in the hands of some of the smartest people I’ve ever met and as a fan I could not be more excited about what’s coming.

Yeah, I absolutely loved the comic, it’s one of those ideas that I wish I’d had first! I’m a huge fan of Mark Millar’s work in general so the opportunity to work with him was too good to pass up. They offered it to me and I jumped right on it!

How different is it to write a script that’s an adaptation compared to writing an original work? What is your process like as you try to adapt the comic to screen?

I typically much prefer to write my own original stuff, but there are always special exceptions that I’ll make, obviously in the case of something like Star Wars and also with Starlight, where the idea was just so good I’d be stupid not to want in on it. In terms of how you go about an adaptation, one of the great things about Mark’s comics is that they already feel so cinematic so it’s not difficult to imagine the movie just from reading the comics. That’s not to say we won’t be making some changes to help the story better suit the medium it’s being adapted to, but when you have a story as great as Starlight you don’t throw the baby out with the bathwater either.

You worked on Telltale Games‘ critically acclaimed The Walking Dead video game. What was it like working on this episodic take on the popular franchise? Did you play that first season and have you played season two at all?

It was really, really exhausting work because telling an interactive story is even more difficult than telling a traditional one in film, but it was so rewarding because the end result was just so great and everybody absolutely loved it. I eventually lost count of how many awards that first season won, but it was an honor to have been involved with something that made such a huge impact.

Will you be working with Telltale on other projects? Or do you have plans to work on any other video games in general in the future?

I’m a lifelong video game fan so I’ve continued to work as a writer and consultant in that area, and I think there’s a better-than-average chance you’ll see something else from Telltale that I was able to help out a little bit with sometime in the future!

Do you have anything else coming up that you’re excited about and want people to watch out for?

I have an original comic-book series coming out soon through Image Comics. It’s called Oliver, and it’s a crazy sci-fi retelling of Oliver Twist that re-imagines Oliver as a kind of post-apocalyptic superhero. It’s absolutely nuts, and I think people are going to really dig it. Darick Roberton, who’s one of the most talented comics artists out there, and who is my co-creator on this book, is doing the most amazing work of his career. I can’t wait for people to see it.