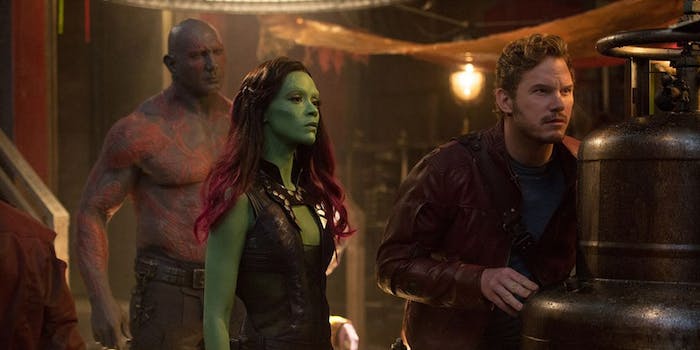 Gamora comic will explore ‘Guardians of the Galaxy’ character’s psyche

The comic will be set in the print universe rather than the film canon.

Nicole Perlman wrote the original version of the Guardians of the Galaxy screenplay, and now she’s returning to Marvel for a comic about one of its main characters.

Following the success of Guardians, Marvel re-hired Perlman to write a comic about Gamora, the green-skinned assassin played by Zoe Saldana in the movie. Gamora has been part of the Marvel universe for almost 40 years, but until now, she’s never starred in a solo title. In an interview with Marvel.com, Perlman said her Gamora comic will have a similar tone to movies like Total Recall and The Matrix.

“This book will reference experiences from Gamora’s past,” said Perlman. “What is it that makes her so unbeatable in battle? Is it simply because of her training, weaponry, and enhancements? I posit that there is something more going on within her psyche than initially meets the eye.”

Judging by that description, this book won’t have difficulty finding an audience. Gamora was a popular character, but some fans were disappointed by herlack of screentime and by the fact that Disney and Marvel left her off a lot of the merchandise. Since Guardians of the Galaxy is the biggest movie of 2014 so far, it’s surprising that Marvel didn’t launch this comic sooner, along with Legendary Star-Lord and the ridiculously successful Rocket Raccoon.

Perlman’s comic won’t be an origin story, but it will explore Gamora’s past. Raised by supervillain Thanos, she spent a long time as his lieutenant and personal assassin before having a change of heart. This kind of redemption arc follows a similar trajectory to Marvel characters like Black Widow and Bucky Barnes, both of whom gained huge followings from their film appearances.

Perlman made it clear that Gamora’s internal struggles will be one of the central aspects of the comic. “One of the reasons I’m drawn to Gamora’s character is the gap between who she is in the film versus her cold-hearted reputation. In the movie, Gamora is the ethical engine of the team—yet ironically is also the one with the most innocent blood on her hands. How did that personality change come about?”

“An aspect of Gamora I hope to highlight,” Perlman said, “is her desire to empower those without a voice; to show them how to free themselves not just from their oppressors, but from their own fears and hatred.”

It looks like this new title will take place in Marvel Comics canon rather than in the movie universe, a distinction that can sometimes get a little murky. However, the fact that Marvel hired Perlman to write the book indicates that they want it to appeal to movie audiences as well.