Why gamers are losing their minds over Fallout 4

Here's why this game is all over your newsfeed.

The reveal of Fallout 4 is to gamers what the second Star Wars: The Force Awakens trailer (the one with Han and Chewie) was to Star Wars fans.

The dust is settling from the reveal on Wednesday of the next Fallout game, but if you work with gamers they are likely still talking loudly and gesticulating wildly over the Fallout 4 news. When we measure the power of a Fallout hype train, we have to look at games like Grand Theft Auto V and any new Legend of Zelda title. Large corners of the social media world have turned into The Fallout 4 Show, and you may be wondering what the hell is going on.

Fallout 4 is the next installment in a long line of role playing games that have been formative experiences for hordes of gamers, for both the unique world in which the Fallout series takes place and the way the original Fallout treated its players like adults, something that was not the norm in 1997 when the original was released. 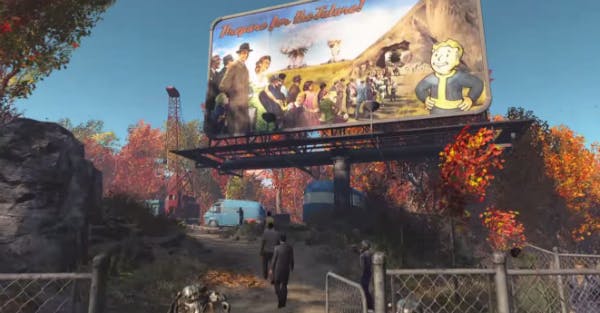 Bethesda Softworks, creator of the Elder Scrolls series of sprawling, fantasy role playing games purchased the rights to the Fallout series in 2007 from original developer Interplay. This news was a cause for concern among Fallout fans for the wide gap between the style of Interplay’s Fallout games, and the games Bethesda Softworks was known for.

Fallout established a unique vision of a post-apocalyptic America. The survivors of a devastating nuclear war were exiting the underground vaults which had protected them from nuclear annihilation. More than 80 years later, these survivors emerged into a blasted landscape filled with raiders and mutants, along with bands of tribal humans attempting to rebuild from the ashes.

In the Fallout universe, 21st-century America had been locked into the mores and design philosophies of the 1950s—smiling nuclear families and chromed cars and jazz music. A war between America and China ended with a full-tilt nuclear exchange. The happy pre-war United States was a bitter, ironic contrast to the depressing, violent world to come.

The turn-based combat of Fallout 1 was laid over a framework of classic, tabletop role playing game systems dominated by ability statistics and odds calculation. The care players needed to take in deciding even small actions during combat helped to pull players into the minutiae and detail of the game world.

The storytelling in Fallout 1 played a larger part in how gamers could lose themselves in the experience. Morality in Fallout was defined by a morality-through-action storytelling system, where players developed “good” or “evil” karma based on the physical effects of their actions, not only through dialogue choices. Varied ways to complete quests played into this karma system, and Fallout had a dark sense of humor about it.

The world of Fallout 1 was brutal, and almost without hope. Players could choose horrific actions and play out the villain in all its bloody glory, show a casual disregard for anything beyond getting the immediate job done, or play the hero. The triumph of making things better in the horrible wasteland that was post-apocalyptic America was satisfying.

Fallout 2 featured the same, popular turn-based combat of the first game, and a story that further developed the Fallout universe by introducing the oppressive remnants of the American government, called the Enclave.

Aware of its popularity and the makeup of its audience, Fallout 2 was also loaded with geek culture references and inside jokes which further endeared the Fallout universe to its fans.

Bethesda’s Elder Scrolls fantasy series is designed around the mantra, “Live another life, in a different world.” Bethesda purchased the rights to the Fallout franchise one year after the release of Elder Scrolls IV: Oblivion, the follow-up to Elder Scrolls III: Morrowind, both of which were fantasy role playing games

Fallout was played in classic, top-down view, whereas Elder Scrolls games were played in first- or third-person perspectives. The combat in Elder Scrolls games therefore felt more twitchy than the turn-based Fallout series. Concerns over whether or not Bethesda would respect the narrative lineage of the Fallout universe further worried fans.

The fears were unwarranted. The first trailer for Fallout 3 demonstrated that Bethesda was clearly taking the Fallout world’s aesthetics and style seriously, and when Fallout 3 was released later that year it was a hit. Bethesda’s first-person and third-person style perspectives worked perfectly fine for Fallout, and the game’s soundtrack of mid-century jazz tracks was fantastic.

The player’s first steps outside Vault 101, located in the Capital Wasteland outside the remnants of Washington, D.C., is still one of the finest reveals in gaming. It was the first time Fallout fans were able to see the post-apocalyptic wasteland directly through the eyes of their character.

Fallout 3 was followed up by Fallout: New Vegas in 2010. New Vegas was developed by a different studio, Obsidian Entertainment, and used the same underlying game systems and graphics as Fallout 3 with an increased focus on branching storylines, and a hardcore difficulty option that reflected the RPGs of old.

New Vegas felt more like an impressive expansion than a true sequel, and the graphics were already beginning to feel dated. Mods have kept Fallout 3 and Fallout: New Vegas alive on the PC, and the improvements show what a modern Fallout game could look like.

The Fallout 4 trailer revealed on Wednesday is more colorful and detailed than either Fallout 3 or New Vegas, so Fallout fans would be in their right to lose their minds over the visuals alone that Bethesda showed off this morning.

Fallout fans have also in the past few years been trolled with false promises of a Fallout 4 reveal, like the Survivor 2099 website in 2013, and a fake trademark filing at the German Patent and Trademark Office for Fallout: Shadow of Boston in 2014.

When Bethesda in February announced its first-ever E3 Showcase, the Fallout 4 hype train got back on its tracks. When an artist’s LinkedIn profile was updated in May to reflect experience working on a Fallout 4 cinematic trailer, impending news of a new Fallout game began to feel like a real possibility.

The reveal is like the exhalation of a breath gamers have held for five years while waiting for the next game in their beloved video game series. Now you understand the torrent of excited babble that will probably continue to pour out of your gamer friends for the rest of the week.