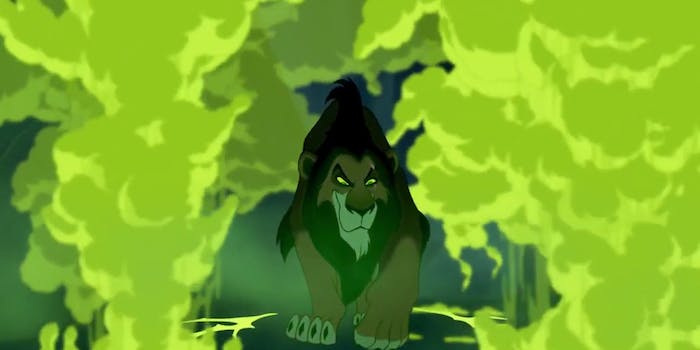 Gamergaters are turning their pain into a musical extravaganza

At this point, it's difficult to tell what Gamergate is parodying: progressive ethics in the gaming community, or just themselves.

At this point, it’s difficult to tell what Gamergate is parodying: progressive ethics in the gaming community, or just themselves.

First, Gamergate proponents decided to move their campaign over to Tumblr, having been more or less thoroughly trounced on Twitter by worldwide outrage and prominent mockery over the hashtag’s association with virulent misogyny in the gaming community.

Now, they’re trying to turn their rhetoric into a musical extravaganza, complete with terrible parodies of Broadway musicals, famous rock songs, and, above all, ongoing ridicule of the struggle for diversity and equal representation in games.

Journey with me now, if you will, into a bizarro land where diversity is the enemy and women who criticize games that sexually objectify them are evil cartoon villains.

Here is a #GamerGate song parody made by #GamerGate supporters which contains only two immediate uses of the N word https://t.co/5WdcQNJDNO

Over on the 8chan.co message board—where, you may recall, Gamergate proponents were exiled after perennial free-speech haven 4chan banned them for repeatedly doxing women in the community—gamers have been plotting to advance their argument through song.

Dozens of gamers have written, sung, edited, and vidded new lyrics to several albums’ worth of songs promoting the Gamergate agenda. The goal, as reported on the 8chan thread for the project, is “#GamerGate supporters banding together to mock the corruption in the Gaming Journalism Industry with song.” The project comes complete with helpful tips for first-time singers or recorders, like “sing in your range,” “warm up first,” and, since hardcore gamers tend to keep fans running to cool their systems, a reminder to “TURN YOUR GODDAMN FANS OFF BEFORE YOU RECORD, JESUS CHRIST.” It even comes with its own Twitter account, GamergateSings, to keep track of its progress.

The project includes a complete rewrite of the lyrics of songs from Les Miserables, the Beatles, Rent, and more.

Though the full catalogue hasn’t been completely created yet, most of the songs are on Soundcloud, and all of the lyrics can be read on Pastebin, linked in the Google doc above. And they’re… interesting, to say the least. Take the lyrics of “They Are Dead,” a satirical filk, or rewritten lyric, of the Lion King song “Be Prepared.” In the original, this song is sung by the villain, complete with a horde of hyenas who resemble Nazi soldiers.

In the Gamergate version, the head “villains” are, you guessed it, feminist gaming critic Anita Sarkeesian, and a number of faceless gaming journalists. According to the lyrics, these conspirators want to take over gaming by declaring real gamers “dead” and, shudder the thought, by ridding gaming of sexism, racism, and homophobia.

The lyrics are, well, not the greatest.

I know that your talent at writing
Is as small as a cuucko’s backside [sic]
But hacks as you are, pay attention
And we’ll take this matter in stride

[Scar:] Our friends will make games! …With no fun, and
Catering to our ideology!
[Shenzi and Banzai:] Yaay! All right! No homosexuals is homophobic!
[All Hyenas:] No violence! No more princesses!
[Full song again]
[Hyenas: {In tight, crisp phrasing and diction}]
We won’t get to the top by merit.
We’ll whine to get all that we want.
[Scar:] Of course, to do so, we’re expected
To kill that old identity
Man who oppose us are rapists
Women sockpuppets shall be
And any foolish minorities
Filthy race traitors, baby!

It… doesn’t get any better from there.

If you weren’t convinced that Gamergate is not actually about ethics in journalism, read the lyrics of these songs. They make the discrepancy even more explicit. The songs all seem devoted to mocking social justice ideals—ideals like making sure the gaming community is a safe space for women and minorities, and that games themselves portray women and minorities fairly, and not just as sex objects or other props for white male gamers.

The end result is something that makes Gamergate look, to say the least, rather ridiculous.

We’re looking for the guy who did “They Are Dead”; new Hyena voices are available for editing.

After all, it’s hard to see how exactly making snarky songs about how stupid it is to fight racism and sexism in gaming will actually lead to any kind of change in gaming media. If anything, the widespread attention to Gamergate has done more to shine a light on the need for more diversity and less extremism in the community.

It’s true that the new musical side of Gamergate is at least a break from the death and rape threats that have characterized the hashtag thus far.

We just hope in the end they’ll find something better to sing about.