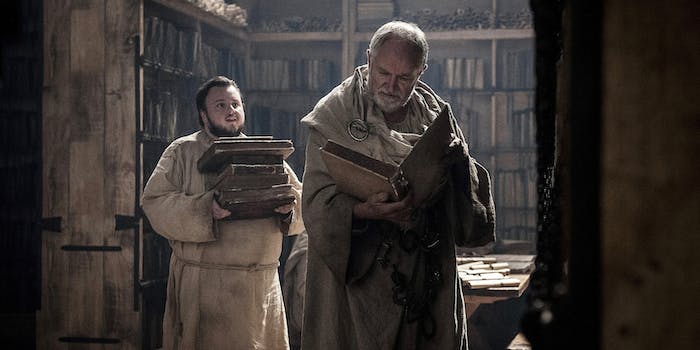 Samwell Tarly is basically at Hogwarts on ‘Game of Thrones’

It extends beyond a restricted section.

Warning: This article contains spoilers from Game of Thrones season 7

Jon Snow and Daenerys Targaryen may have finally met on Game of Thrones but on what feels like the other side of the world the pieces continued to move, prompting a likely reunion as well as one of the better (and possibly unintentional) running gags.

In Oldtown, Samwell Tarly has strayed off the path more than once in his journey to become a maester. In just three episodes, he stole a book out of the library’s restricted section, sent Jon vital information about Dragonstone and dragonglass from that stolen book, and snuck into Ser Jorah Mormont’s room in the dead of night to perform a surgery he was explicitly forbidden from trying. The good news is that Sam hasn’t been kicked out of the Citadel. The bad news is now he’s basically in maester detention for the foreseeable future.

He’s progressing quickly with his training, but with each episode it’s becoming clearer that Samwell Tarly is basically at a Game of Thrones version of Hogwarts. It’s unclear if Sam’s maester training will go this way in the A Song of Ice and Fire book series, but the parallels on Game of Thrones are starting to become more apparent—and not just because Harry Potter’s Professor Horace Slughorn, Jim Broadbent, is playing Archmaester Ebrose.

The restricted section of the Citadel’s library

Although Sam came to Oldtown to become a maester, his other goal is to find out as much as he can about White Walkers, wights, and the weapons that could destroy them. But not only do most of the maesters not believe him, he’s not even allowed to research on his own time.

“I asked you if in light of what I’ve seen in the north, if I could have access to the restricted area of the library,” Sam asked. Although Archmaester Ebrose believes Sam’s story, he refuses to give Sam special access. This particular line is what sparked the beginning of Sam’s Harry Potter parallels, though at the time it felt more like a nice nod or joke.

Sam wasn’t going to let something like restricted books stop him. He might not have been able to charm Archmaester Ebrose with flattery like Hermione did with Gilderoy Lockhart to access off-limits books, but Sam’s attempt to take a book went better than Harry’s did in Sorcerer’s Stone.

The one thing that makes everything click for Harry, Ron, and Hermione in Sorcerer’s Stone isn’t a major confession (though that does come toward the end of the book). After reading Nicolas Flamel’s name on a Chocolate Frog card, Hermione finds a book she checked out of the library has more on the alchemist behind the Sorcerer’s Stone. It’s one of several times Hermione’s bookworm tendencies had a huge impact on the story.

Similarly, Sam’s library reading helps him rediscover something he already knew from Stannis Baratheon: There’s a lot of dragonglass at Dragonstone, the weapon that can defeat White Walkers.

Sam’s discovery might not be a silver bullet, but his actions did push Jon forward. Despite almost everyone advising against it, Jon traveled to Dragonstone to parlay with Daenerys. And now Jon has Daenerys’ word that not only can he have all of the dragonglass he needs, he’ll have her men to help him mine it.

A potentially dangerous procedure—and a forbidden one, too

Sam successfully saves Jorah’s life after he sneaks into Jorah’s room to treat his greyscale. Though greyscale is often treated like a death sentence, a possible cure resided in the Citadel in the book called Archmaester Pylos on Rare Diseases. It’s not commonly known or used because it’s risky for even the most accomplished maesters; the man who discovered it died from greyscale himself. It’s why Archmaester Ebrose forbade Sam from attempting it.

Luckily for Daenerys, who will likely soon have Jorah back at her side, Sam didn’t listen.

Though the cure for greyscale didn’t appear to be in the restricted area of the library like the Dragonstone book—Archmaester Ebrose didn’t immediately chide Sam after he mentioned having read it—Sam read about the cure in a book and referenced it as he proceeded to remove Jorah’s infected skin. He’s done something far more experienced maesters would never touch, and he succeeded. Even Archmaester Ebrose, amid his frustration with Sam, is impressed. We’ve come to expect brutality from Game of Thrones, which is perhaps why this stern but measured reaction stuck fans as something they’d expect from a Hogwarts professor.

The comparison also lines up two-fold. Hermione successfully made a Polyjuice Potion, which is  normally far beyond the skillset of Second Years, in Chamber of Secrets. And in Half-Blood Prince, Harry saves Ron’s life with a bezoar after Ron’s accidentally poisoned thanks to what he read in the Half-Blood Prince’s Potions book. The latter scene, incidentally, was with Professor Slughorn.

Despite breaking the rules, Sam perhaps expected a kind of reward for successfully curing Jorah. And Archmaester Ebrose does give him one: not immediately expelling him from the Citadel.

But he also punishes Sam by making him rewrite what looks like dozens of decaying scrolls. Harry Potter suffered a similar punishment after performing Sectumsempra on Draco Malfoy: Severus Snape made Harry rewrite Argus Filch’s reports of student rule-breaking. At the very least, Sam’s punishment—while tedious and grueling—seems far more productive than Harry’s.

Perhaps he might even learn something else he can pass onto Jon.

The irony in comparing Sam at Oldtown to Harry Potter

Both Harry Potter and Game of Thrones exist in a world of magic, but while one embraces it, the other will go out of its way to keep ignoring its existence. And in the case of some maesters, they may even be trying to destroy it.

So far, Oldtown’s anti-magic sentiment only extends to not believing Sam’s word on the White Walkers and the Army of the Dead because, as Tyrion Lannister inferred in “The Queen’s Justice,” it’s easy to believe what you want to believe. In the books, it extends much further, leading some fans to believe that there’s a kind of Grand Maester Conspiracy. According to Archmaester Marwyn in A Feast for Crows, the maesters were responsible for wiping out the Targaryen’s dragons the last time around and are attempting to rid the world of magic. It was also Maester Aemon’s connection to Targaryens and magic that prevented him from ever being promoted.

It’s unlikely that Game of Thrones would touch on that aspect of the Citadel’s inner-workings with so few episodes left. But as Sam fights to learn another day, his curious mind will strive to uncover much more. If as a novice he tackled greyscale, imagine what he’d do with some actual chains on him.