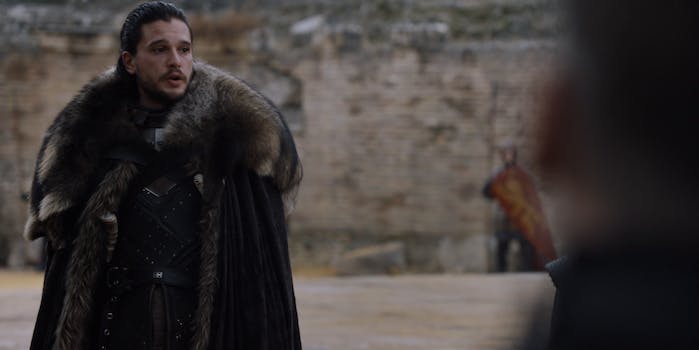 Warning: This story contains spoilers for the Game of Thrones season 7 finale, “The Wolf and the Dragon.”

Game of Thrones ended its intense seventh season on Sunday night with several jaw-dropping moments. Not only did our prospective rulers hook up, we said a not-so-fond farewell to Petyr Baelish. And let’s not forget that terrifying moment when the Wall came crumbling down, leaving Westeros exposed to an army of dead men, giants, and creatures.

With so many huge moments, you may have missed some of the smaller—but still important–scenes in the season finale. Here’s a closer look.

1) We got a preview of Cleganebowl

It’s no secret that Sandor Clegane (the Hound) hates his brother. After all, Gregor Clegane (the Mountain) is the reason he sports that gnarly burn scar on his face. Fans have hoped for years that the two huge warriors would face off in an epic duel to the death, affectionately nicknamed Cleganebowl—and we may have seen a preview for it on Sunday night. Sandor all but promises that he’ll kill his brother (who’s already a kind of zombified, thanks to Qyburn’s unnatural remedies). If it happens in season 8, you can bet fans will be ready with their popcorn.

Jon Snow may be a loyal leader and a capable battle commander, but he’s still a blockhead when it comes to politics. During his grand summit with the rulers vying for power, Cersei Lannister agrees to send her army north to help fight the war against the dead as long as Jon Snow agrees to stay neutral in the war for the Iron Throne. But instead of demurring to this reasonable request or even making an excuse, Jon declares that he’s already pledged his allegiance to Daenerys. Cersei, insulted, rescinds her offer and stalks off, leaving Tyrion, Daenerys, and Davos to chide Jon for being so stupid. Tyrion seemingly saves the alliance with Cersei (though viewers see that she’s playing him), but Jon’s stubborn disinterest in diplomacy continues to do more harm than good.

3) Theon may actually redeem himself

Theon is in the running for everyone’s least-favorite character on Game of Thrones. After betraying the Starks, he more than gets his comeuppance as he’s tortured and brainwashed by the sadistic Ramsay Bolton. He stood by as Ramsay brutalized Sansa, and though he’s understandably traumatized, Theon then allows his sister, Yara, to be abducted by their uncle Euron Greyjoy without even putting up a fight. He’s pathetic, and he knows it. But after getting a measure of forgiveness and advice from Jon Snow on Sunday, Theon somehow summons the courage to round up a rescue party. He even fights one Ironborn sailor who refuses and wins. Could this be the start of a redemption arc for Theon?

While Jon Snow proved himself to be a hapless negotiator, Cersei is getting more cunning than ever. She realizes that she needs more men to match Daenerys’ vast army, so she uses the gold pillaged from Highgarden to pay off the Iron Bank. That maneuver secures her access to the Golden Company—an army of 20,000 men with horses and elephants—which seriously improves her odds against Daenerys. Cersei even tricks her enemies into thinking she’ll cooperate with them, first by making it appear as if Euron has abandoned her (when he’s really going to pick up her new soldiers), and by letting Tyrion think her pregnancy has softened her thoughts on the future. He leaves believing she’s willing to fight for the living, but as we soon learn, Cersei plans to let her enemies die fighting the dead while she sets up reinforcements in the fight for the crown.

When Samwell Tarley arrives at Winterfell, his first stop is to see Bran Stark, who remembers him from their time at the Wall. Bran tells Sam that Jon needs to know the truth about his parents—that he’s Rhaegar Targaryen and Lyanna Stark’s son, and his true name is “Sand,” the surname of bastard children born in Dorne. Fortunately, Sam was paying enough attention to register Gilly’s revelation from High Septon Maynard’s personal diary that Rhaegar’s first marriage was annulled before he married Lyanna, making Jon not only a true Targaryen but also the heir to the Iron Throne. We expect Jon will not be happy to hear this, considering he’s in love with Daenerys (his aunt).

One of the more painful storylines for fans this season has been watching Sansa and Arya Stark fight. We’ve come to know these characters, and after all they’ve been through, their bickering seemed more like poor scripting rather than authentic rivalry. But it turns out the show’s writers were allowing Littlefinger’s meddling to set up his downfall. After Sansa realizes Littlefinger is trying to tear the family apart, she has Arya execute him. The sisters aren’t exactly hugging it out at the end, but it’s clear they feel the importance of their family ties, and they have a newfound respect for each other.