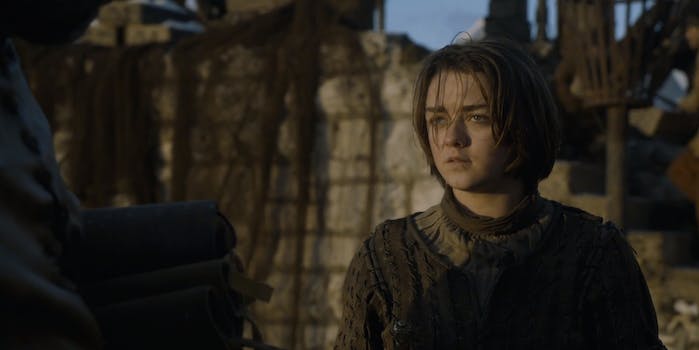 We have some new insight into Arya's journey.

The first footage from the fifth season of Game of Thrones is here and it manages to pack quite a punch for such a short clip.

To be fair, it’s a bit of a stretch to call the 10-second clips released on the official Game of Thrones Twitter account legitimate teases; the teaser trailer for the Jurassic World trailer was longer. This Twitter clip shows flashes of mostly old footage featuring everyone’s favorite preteen sociopath Arya Stark, accompanied by some haunting words that the red priestess Melisandre once said to Arya back in season 3: “I see a darkness in you.”

The teaser does include one new scene that has sent the fandom into a veritable tizzy.

The trailer, like the tweets from HBO, directs fans to the mysterious ThreeEyedRaven.com, a site gearing up to be a marketing campaign. There, you can sign up to receive the Sight from the Three-Eyed Raven—which allows you to see the future in Game of Thrones—through Twitter or SMS.

Once you fill out the relevant information and agree to the terms, you’ll receive a text or Twitter DM. I linked my Twitter account and this is what the first message looks like. The Three-Eyed Raven promises more messages in the future. 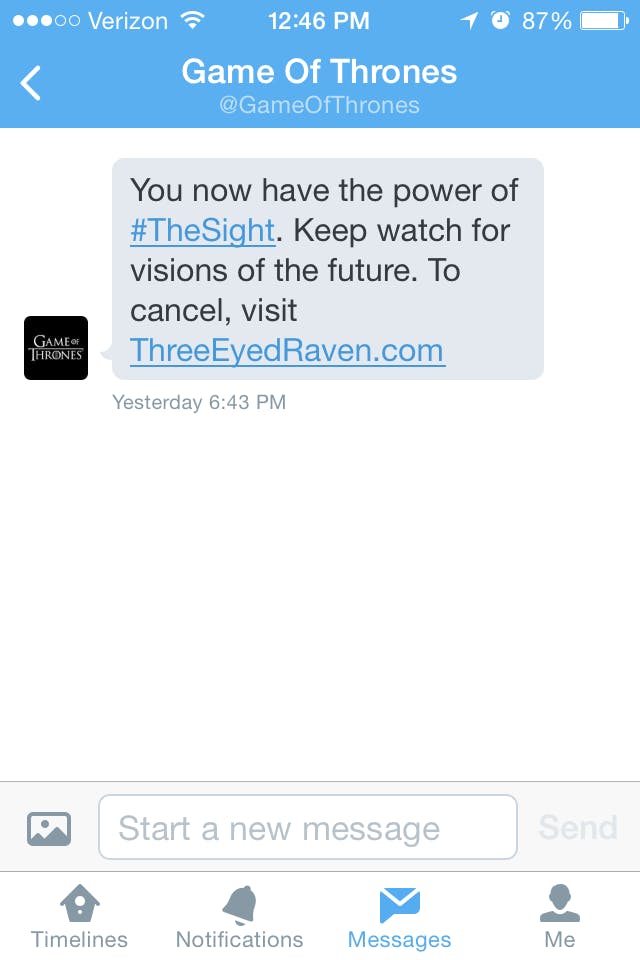 With precious little information to go on, there are already a couple of things we can take away from this early marketing effort.

We know that Arya is going to Braavos, as seen at the end of “The Children” when she hands her iron coin over and says “Valar Morghulis.” The showrunners drove home this point even further with the presence of a door in black and white.

These aren’t the doors of someone who’s really indecisive about what color to use and ends up using both. They are the same doors that lead to the House of Black and White, which is home to the Faceless Men, the assassins in Braavos, and a temple for the the Many-Faced God they worship. It’s where Arya spends much of her time as she is initiated into the Faceless Men and learns to become an assassin—at the cost of leaving behind her Arya Stark identity.

On the other hand, it’s very curious that HBO is choosing to use the Three-Eyed Raven as the heart of its marketing campaign, given that the one person who had the Sight, Jojen Reed, is dead in the show, and the other main character who experienced it, Bran, won’t be in Season 5.

In the books, Arya has the ability to warg into her direwolf, Nymeria, and other animals just like Bran, but since she isn’t traveling with someone like the Reeds who can explain what she’s experiencing, she writes it off as strange dreams; in the show, Arya’s ability to warg has yet to be mentioned. With no Jojen or Bran, it’s entirely possible that Arya’s warging—and maybe even Greensight—will be touched upon in the next season.

We’ll all be waiting for that next raven.