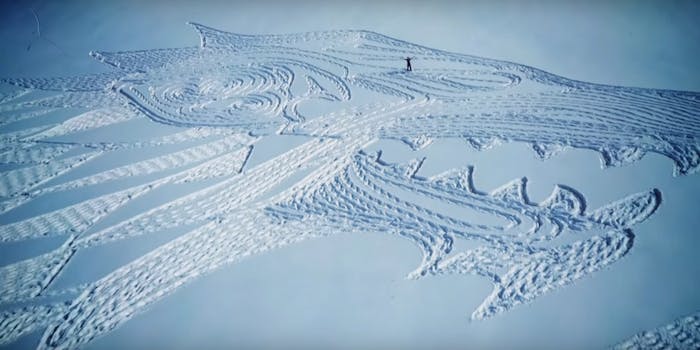 The fight for the Iron Throne is still ongoing in Westeros, but in the land of (sometimes) winter, the winner is far clearer.

Sky Atlantic, which airs Game of Thrones in the U.K., recruited British snow artist Simon Beck to create something spectacular ahead of the show’s sixth season. Beck, who already has a vast collection of snow art under his belt, more than met their challenge, creating a display and sigil worthy of House Stark.

The project took 13 hours, approximately 64,800 steps, and spanned 32.5 kilometers, and Beck used his body, snowshoes, and some mathematics to create it. But when camera zooms out, you can truly see the scope of the piece. It’s not the most effective way to send a message, but Westeros could imitate it once winter fully arrives—if they’re not too busy fighting off White Walkers, that is.