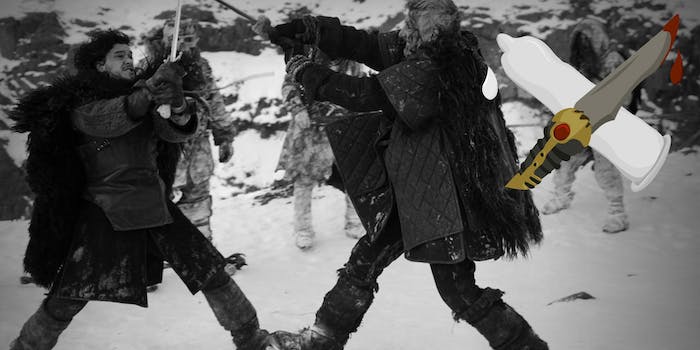 An illustrated guide to sex and death in ‘Game of Thrones’

Who’s the sexiest, most dangerous Game of Thrones character?

Game of Thrones transformed TV sex. While previously, audiences treated it like, well, sex—a bit of boob and some heavy breathing, not to be brought up around relatives—HBO’s smash fantasy epic series has invented a new dramatic form, what’s now known as sexposition.

No longer is the naked form splayed across the screen in senseless titillation. Nudity is combined with expository dialogue, and viewers are treated to finest bodies in Westeros paired with characters’ backstories and inner musings.

Basically, sex isn’t just sex in Game of Thrones—and there’s a whole lot of it.

There’s also a whole lot of death, violence, and murder, maybe even more so, in fact. But how much more? Are characters as sexually ravenous as they are vicious? Which houses (Tyrell, Lannister, Targaryen, Stark) are most rampant—both in and out of the bedroom? How much blood is spilled in the show compared to… er, other stuff?

Here at the Daily Dot, we do love our infographics. And this week we’ve taken it upon ourselves to answer all these questions—and more. So, without further ado, we give you the Game of Thrones Sex:Death ratios.

Scroll to the bottom for the complete infographic.

Data is accurate as of the end of episode 7 of season 4, “Mockingbird.”

All figures refer primarily to on-screen or known instances of sex and murder.

We must stress: Calculating these is not an exact science. Sometimes sex is (all too) clearly portrayed on screen; other times it is just heavily hinted, or implied before or after the scene. Sometimes a murder is clean cut; other times, in the heat of battle, it’s difficult to tell even whose sword is whose. We trust you will not be too harsh on us if you are more eagle-eyed and spot minor discrepancies.

The data we collected from two sources: First, the incredibly impressive and accurate episode synopses supplied by the Game of Thrones wiki, often going into scene-by-scene episode breakdowns. Unfortunately, it was not feasible for us to re-watch every single episode in the all four seasons to gather the information—though we did go back and revisit critical scenes, or where the wiki was unsure or unclear on an issue. In collecting the data on kills, we came across an issue that’s plagued the legal system for thousands of years: intent. Who’s truly responsible for any given death? What if the killer was just following orders? It’s a tricky one, without a simple answer. In some instances—like when Daenerys ordered the death of 163 Meereenese—we gave her the kills, even though it’s highly unlikely she swung the sword herself. She gave the direct order, however, and in lieu of knowing exactly who was directly responsible for the deaths, it makes sense to give them to her, as it was her “intent” that caused them.

Conversely, there are times when a character acting under another’s direct orders kills someone in the process of carrying out their duties, but was not explicitly told to kill. In such instances—as when Grey Worm et al. invade Meereen—we have assigned them to the murderers themselves. Characters who may not have carried out all of their kills themselves, but nonetheless bear the “intent” for them, are marked as such.

As you can see, it is not an exact science.

There’s also the added complication of totally off-screen kills/sex. For instance, Robb Stark’s kills may look surprisingly low—he was a renowned battle commander, after all—but as the vast majority of battles (Oxcross, the Whispering Wood, etc.) were off-screen, any figure we chose to give would be total conjecture. Likewise, he and Talisa no doubt took a roll in the hay a fair few times (she did get pregnant, after all), but we have no way to build a reliable numerical estimate.

As such, the data should be taken as referring to on-screen prolictivities.

Speaking of estimates, there are two characters that bear mentioning: Walder Frey and Tyrion Lannister. At the Red Wedding most of Robb Stark’s bannermen were put to the sword at the order of the “late” Walder Frey. We don’t know exactly how many were, but the books tell us the “Young Wolf” had 3,500 bannermen in total. Allowing for some escapees and prisoners, 3076 sounded about right. 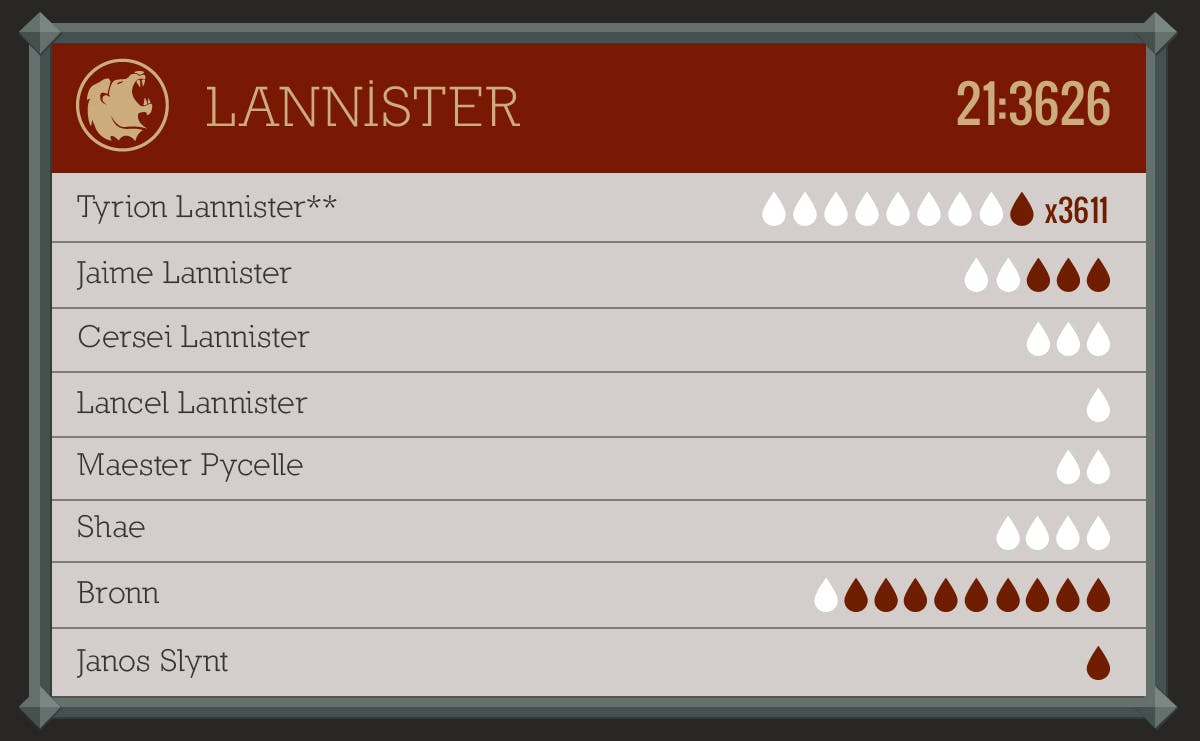 Similarly, Tyrion was, via wildfire, directly responsible for the deaths of countless thousands of Stannis’ men on the Blackwater—even if Bronn shot the arrow at his command. It’s never clear exactly how many, but our guess seemed as good as any. As both Tyrion and Walder’s kills are estimates, they are marked as such on the infographic.

As you’ll have noticed, some characters are not technically members of the houses in which they have been placed—Bronn in the Lannister faction, for instance. However, due to close strategic ties, employment, love, or friendship (like Salladhor Saan and Davos Seaworth), we’ve sometimes opted to include them where it makes more sense to, or if they have no house of their own.

With a cast as expansive as Game of Thrones’, no doubt we’ve missed one or two smaller characters. If we’ve neglected your favorite minor lordling, then you have my most humble and sincere apologies. We have however included a section for notable other characters that don’t sit easily in any established house.

What conclusions can we draw from all of these? Plenty.

Now here’s the full infographic, in all its bloody, sexy glory:

**These figures are estimates based on the available information.

Now check these two out: