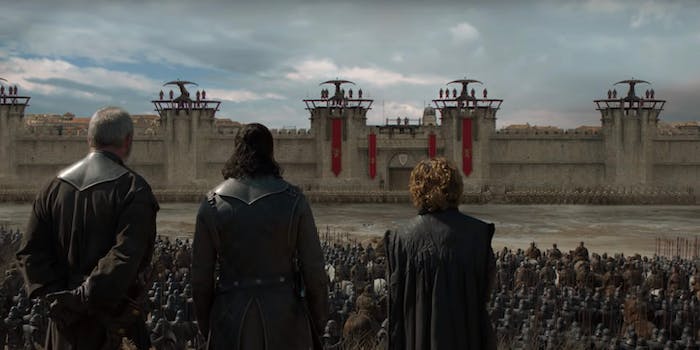 The pieces are set for a battle in King's Landing.

Another Game of Thrones battle is brewing in King’s Landing, and if the teaser for next week’s episode is any indication, it’s going to be a massive one. Episode 5 was directed by Miguel Sapochnik, who is known for handling Thrones’ battle episodes.

Thanks to “The Last of the Starks,” the pieces are in place for the battle to begin. Jon arrived on King’s Landing’s doorsteps with Daenerys Targaryen’s army. Tyrion and Dany remain in Dragonstone, but you can tell that he has his concerns after Dany witnessed the death of another close companion. Cersei Lannister watches from the Red Keep, Euron Greyjoy is on his ship, and the Golden Company marches onward.

Everyone is all but anticipating that Dany will come riding out with Drogon, her last dragon standing. Multiple characters even look to the sky for the moment we’ve all seen before. But for now, we’ll have to wait until next week to see if that arrives.

The next Game of Thrones episode airs on May 12.