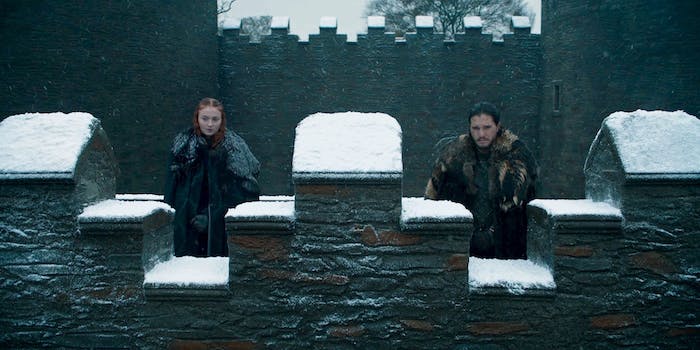 HBO confirmed what many Game of Thrones fans already knew about season 7 in a press release issued Monday: It will be shorter than every other season to date at just seven episodes, and it won’t premiere until the summer.

Coming off its biggest season yet (and its recently announced 23 Emmy nominations), the decision to delay the next season is one driven by the story.

“Now that winter has arrived on Game of Thrones, executive producers David Benioff and D.B. Weiss felt that the storylines of the next season would be better served by starting production a little later than usual, when the weather is changing,” Casey Bloys, president, HBO programming said. “Instead of the show’s traditional spring debut, we’re moving the debut to summer to accommodate the shooting schedule.”

As Game of Thrones showrunners David Benioff and D.B. Weiss already said a couple weeks ago on UFC Unfiltered, they wanted to hold off on starting production on the seventh season because some of the locations they use would be too sunny for the mood it needs to set. Winter is here, so even a sunny place like Dorne would likely be more drab than usual.

“We’re starting a bit later because you know, the end of this season, winter is here and that means that sunny weather doesn’t really serve our purposes anymore,” Weiss explained. “So we kind of pushed everything down the line, so we could get some grim, gray weather even in the sunnier places that we shoot.”

News of a shorter seventh season was also rumored before being officially confirmed by HBO. Benioff and Weiss have said for months that they imagined 13 more episodes of Game of Thrones, which would be spread over two seasons.

Along with Northern Ireland and multiple cities in Spain, HBO confirmed that Game of Thrones would shoot in Iceland—the first time it’s done so in season 4. Iceland was often a backdrop for beyond the Wall, but it also included some scenes in Westeros itself, such where Brienne of Tarth and the Hound fought in the episode “The Children.”