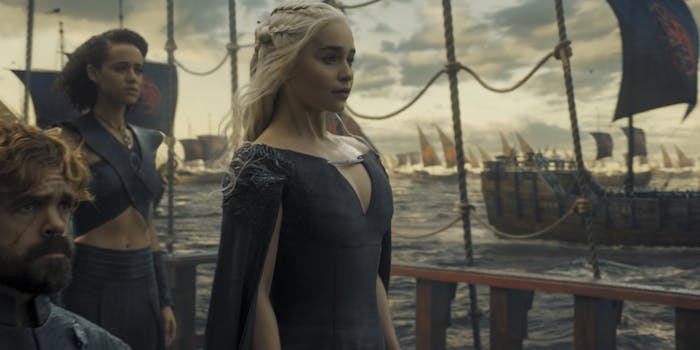 ‘Game of Thrones’ season 7 will be delayed

There's a good reason for it.

Winter might finally be here, but we’ll have to wait a bit longer to see Ned’s promise play out.

Fans riding the high off the end of Game of Thrones’s sixth season are already anxiously awaiting season 7, but showrunners David Benioff and D.B. Weiss reveal that the next (albeit shorter) season will arrive a bit later than usual.

Benioff and Weiss chatted with Matt Serra and Jim Norton on the UFC Unfiltered podcast, talking about the past season of Game of Thrones and offering a tease or two about the upcoming season. They were asked whether the show would come back in April (as it has the past six seasons), and the duo revealed that season 7 would probably air later than usual.

Their reasoning for the decision is due to the types of stories they’re trying to tell, and the summer sun is more of a hinderance.

“We don’t have an air date yet but this year it’ll probably be a little bit later,” Weiss said, according to transcription from Watchers on the Wall. “We’re starting a bit later because you know, the end of this season, winter is here and that means that sunny weather doesn’t really serve our purposes anymore. So we kind of pushed everything down the line, so we could get some grim, gray weather even in the sunnier places that we shoot.”

The Game of Thrones writers start planning for the next season before the current one finishes airing, so they already have an idea of certain things they need for the seventh season. The only downside? Fans will endure a longer wait for new episodes.

In the meantime, there’s more than enough media out there to keep Game of Thrones fans busy until we finally learn what happens next.

We’re going to wait more than 10 months for new episodes, so that’s plenty of time to get started into George R.R. Martin’s fantasy saga that inspired the show we all obsess over. A Game of Thrones alone has plenty of evidence supporting the now-confirmed R+L=J theory.

If you’ve read that already, enrich your knowledge of Westeros and Essos with The World of Ice and Fire, full of more than a few tantalizing hints about the mysteries we want answered most. Soon enough, you’ll be theorizing with the rest of us.

The only caveat? Once you finish you’ll be waiting for The Winds of Winter like the rest of us—and that hiatus has been nearly five years and counting.

Pick up the Dunk and Egg stories—or maybe something else

ASOIAF a bit too much for you? Start with A Knight of the Seven Kingdoms, a collection of buddy-adventure novellas from Martin starring Ser Duncan the Tall (who had four pages in the Kingsguard’s White Book to himself) and the future ruler of the Seven Kingdoms, Aegon Targaryen; he’s Maester Aemon’s younger brother, and who Aemon called out to before his death last season. They’re a bit easier to digest than ASOIAF, and you’ll be sure to recognize plenty of the names.

If that’s not your speed, many similarly themed books are out there to read.

Rewatch the past six seasons (again)

Even if you take your time, Game of Thrones has 60 hours of television ready to be watched over and over with more than a few new revelations stealthily hidden now that we’re properly caught up. It’s pretty easy to catch up legally, too.

Write down your potential Martin conspiracies

When word that Game of Thrones’s sixth season wouldn’t premiere until the end of April, some fans theorized that the show was being held back so Martin could release The Winds of Winter before the new season. That never came to pass, although Martin admitted he did try to make that happen, and chances are that theory might persist for season 7.

But as far as we know, Game of Thrones is being delayed so it can tell the story it needs to with the proper backdrop—and maybe we’ll get a new book at some point. For now though, just let the man write.