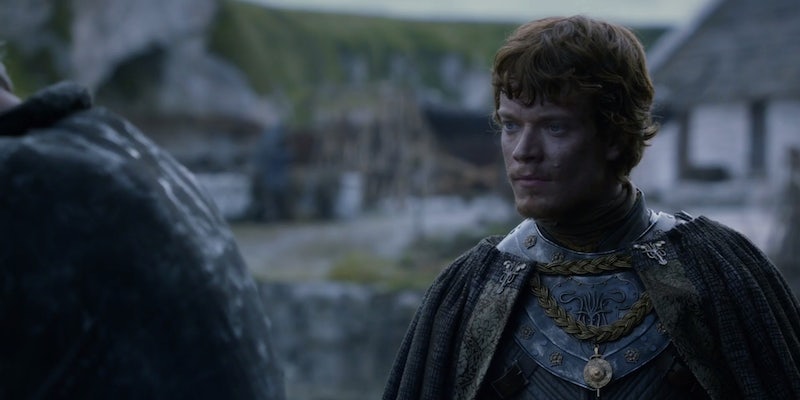 5 things we just learned about ‘Game of Thrones’ season 6

What is dead may never die—even long-forgotten character arcs.

This article contains spoilers from Game of Thrones and A Song of Ice and Fire.

A Great House thought to be long abandoned may finally rise back up to the forefront in the sixth season of Game of Thrones, if a leaked casting list is any indication.

Although we’re still in the heart of season 5, pre-production for the next season is in full swing. The writers are hard at work, scouters are searching for new filming locations, and casting directors need to fill out new roles. Game of Thrones fansite Watchers on the Wall obtained the casting list, along with descriptions for the various characters.

However, having learned from past leaked casting lists, the casting directors have wisely removed any mention of names so that alone won’t give away what stories the show plans to cover. Instead, the casting list uses names like “Pirate,” “Father,” “Priest,” and “Fierce Warrior.”

But these descriptors, while vague for most, make it possible for the book readers to see where aspects of the show are going. Some, such as the Priestess and the Fierce Warrior, could apply to a number of characters. Others are much more clear.

We’ve covered a lot of ground in season 5 and season 6 may spoil parts of the books, but we’ve still got plenty of ground from A Feast for Crows and A Dance With Dragons that’s fair game. Here’s what to look for.

1) The Greyjoys do not sow

We haven’t heard a peep from the Greyjoys since Yara’s (Asha in the books) failed attempt to rescue Theon from the hands of Ramsay Bolton last season. The Greyjoy kingsmoot plotline from AFFC seemed to go to the wayside in favor of Dorne. Gemma Whelan’s IMDb page says she’ll be reprising her role in the final two episodes of the season, but as we’ve learned, that’s to be taken with a grain of salt. And to many people’s annoyance (including this author), Balon Greyjoy is still alive.

The role of Pirate could change all that.

According to Watchers on the Wall, the character is “an infamous pirate who has terrorized seas all around the world. Cunning, ruthless, with a touch of madness.” He’s described as being anywhere from his 40s to his late 50s, and it’d be a substantial part for season 6. It sounds like a deadringer for Euron Greyjoy, Theon’s uncle, who has a dark and twisted reputation that precedes him.

Euron doesn’t show up until AFFC after his brother Balon’s death—some believe he hired a Faceless Man to do the job—so his arrival on the show could signify a couple of things. One, that Balon is gonna bite it; the actor who plays him is also listed for the final episode this season so it could happen even sooner. And two, we may get the kingsmoot next season—although whether Victarion (who’s pretty psychotic in his own right) will also be cast is another question.

The other major casting call is for Father. He’s an older man than Pirate, one who will be in his 50s or 60s, and is described as “one of the greatest soldiers in Westeros—a humorless martinet, severe and intimidating. He demands martial discipline in the field and in his home.”

Now who do we recall being a great soldier, one who once defeated Robert Baratheon in battle? Randyll Tarly, Samwell’s father, as well as a Tyrell bannerman.

That’s right. We may be getting a family reunion. (And probably not a pleasant one, considering that Randyll threatened to kill Sam if he didn’t join the Night’s Watch and nullify his claim as Randyll’s heir and let his younger brother Dickon inherit the land.)

With Maester Aemon Targaryen’s death in “The Gift,” the Night’s Watch is down a maester—and even Stannis Baratheon has voiced the importance of having knowledge. Jon orders Sam to depart for Oldtown in order to become a maester; he’s already the most-read Night’s Watch brother, so really it’s a perfect promotion for him. He may be down a travel companion from the books, but he’ll likely take Gilly with him to get her away from the men who tried to rape her this past episode.

In the books, Sam takes Gilly to Horn Hill, where she pretends that she’s had Sam’s bastard son so that his mother will look after her. And the casting also calls for “Mother,” “Sister,” and a “Brother” who is “not particularly bright but the favourite child of the father.”

But when he does reach Oldtown? Anything can happen in the home of the Faith of the Seven, particularly with the Militant Faith causing chaos in King’s Landing.

3) Bran’s likely to have some tree-based flashback visions

Bran Stark has been out of commission this season, much like Gendry on his boat, but showrunner David Benioff explained that was because watching Bran train wouldn’t have been that interesting. He’d much rather come back to him again later on once he’s learned a bit.

“So rather than being stuck in a cave for a year, we figured it would be interesting to leave him out for a bit, so when you see him again…” he said in November.

With the list calling for three boys ages 7-12, it calls back to last year’s cast reveal that a younger Cersei would show up in the show’s first-ever flashback. While one of the boy’s appearance is for one episode, the other two could show up more than once. With Bran learning how to see the past, present, and future in the weirwood trees under the tutelage of the Three-Eyed Raven, he could easily go back to a time when his father Ned was a boy. Some believe that the boys could be Ned, his older brother Brandon, and a younger Robert, but people are also considering other options like Howland Reed, or Ned’s younger brother Benjen.

And like Sean Bean, we wouldn’t say no to an adult Ned Stark flashback either.

4) Arya may need to put on her best face

Arya Stark just discovered the Faceless Men’s idea of interior decorating, and while she isn’t quite ready to become No One, she’ll become someone else. It’s in that capacity that we may finally see her Winds of Winter chapter play out—and possibly paired with Leading Actress, who travels with a theater company.

Not that one, but we’re hoping. Instead, it’s because the casting list is calling for Priest, a former soldier who found religion in the Faith of the Seven and aids the poor, so somewhat like the High Sparrow without all that thirst for power. The likely priest from the books, Septon Meribald, aids Brienne of Tarth and Podrick Payne in the books, but it’s unclear if they’ll meet him in the show.

What will be more interesting for fans is whether his presence will mean that another character actually survived and is now a lowly gravedigger?

H/T Watchers on the Wall | Screengrab via HBO Go