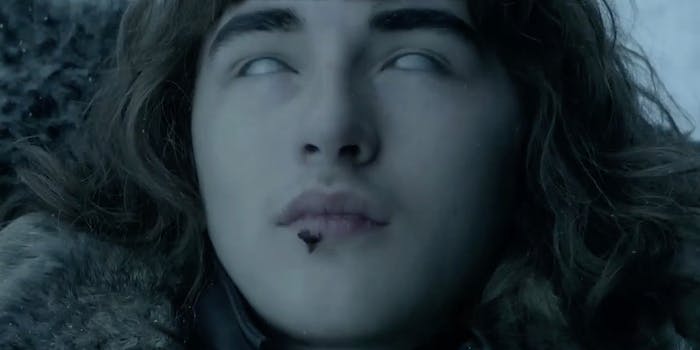 Does this ‘Game of Thrones’ season 6 teaser validate a Jon Snow theory?

We've got a lot to unpack.

The first Game of Thrones teaser trailer for season 6 is here, and if those visions are any indication it’s about to get bloody.

Jon Snow—who already graced the teaser poster—and many of the other characters who have been dealt horrible fates serve as a backdrop of what will likely be one of many ominous conversations between Bran Stark (Isaac Hempstead-Wright) and the Three-Eyed Raven (Max von Sydow), who have been training his Sight abilities off-screen over the past season.

“We watch, we listen, and we remember,” the Three-Eyed Raven says to Bran. “The past is already written. The ink is dropping.”

“They have no idea what’s going to happen,” Bran answers after a lingering shot of Jon’s “dead” body.

While Bran and the Three-Eyed Raven never mention any of the characters by name, it’s evident that there’s a particular focus on Jon. But that last shot in particular—which pairs Jon’s final shot with Bran full into warging mode—offers up an intriguing question. Is that a nod to the theory that Jon could warg into Ghost (an ability Jon and all of the Starks possess) after his “death,” or is the show just messing around with us?