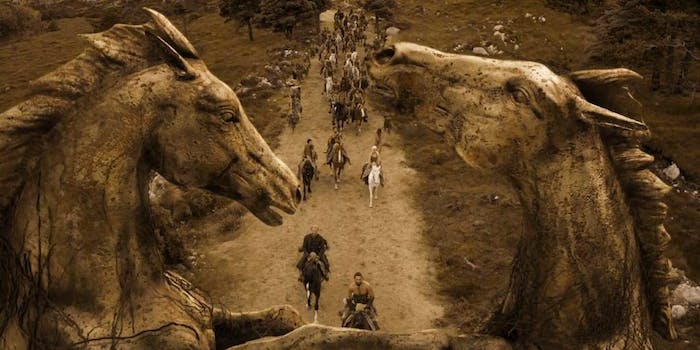 An actor accidentally posted a photo of the page to his Instagram.

Intel from the set of Game of Thrones set—which is still in the middle of filming season 6—usually comes from stealthy photographers or online leaks, but now we have the rare occurrence of a cast member posting clues online.

Last week, Watchers on the Wall reported that French actor Elie Haddad, who was recently spotted in Belfast, Northern Ireland, had been cast in Game of Thrones. He reportedly posted a photo of his iPad to Instagram showing a page of a Game of Thrones script on Nov. 2. His name is clearly printed onto the script, likely a way to determine where a script leak came from if it ever was leaked—instead of posted by accident.

It’s since been deleted, but the Internet remembers (much like the North), so the lone page of season 6 lives on the Internet. It has gotten more attention over the past few days as sites that aren’t strictly devoted to Game of Thrones devotees discover it.

a new #goT actor ellie haddad accidentally shared a picture on instagram [now deleted] you can see some details pic.twitter.com/RKFhRgF9tL

According to keen eyes, this is what the script appears to read:

“I bet she gets nice and pink when you pinch her.”

The script indicates that the conversation is between two Dothraki—with the English translation in parentheses—and that Missandei is in the scene, although it’s unclear if she’s an active participant, translating Dothraki, or is in disguise; she’s mentioned in one of the scene descriptions at the top of the page.

The last time we saw Missandei she was still in Meereen, soon after Daenerys Targaryen fled the city on Drogon. But Dany was in a bit of a pickle herself, having been surrounded by a huge khalasar, or a “nomadic horde of Dothraki.”

While there are other former khaleesis out there in the form of the dosh khaleen who live in Vaes Dothrak (which Dany is rumored to travel to this season), these two Dothraki are probably talking about Daenerys.

Some of Khal Drogo’s men didn’t respect Daenerys when their khal was alive because she was a foreigner (and a woman), and something tells us they’re not about to start now.

But how they got to the point of casually sexualizing Daenerys—and how Missandei got into the mix—is far less certain, just like every other part of the season.