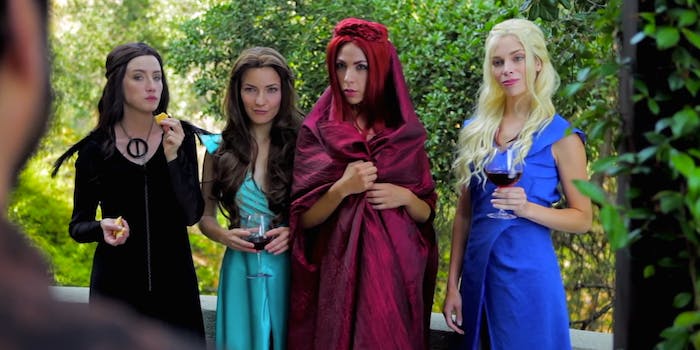 The night is dark and full of cat fights.

We finally got the Game of Thrones–Real Housewives mashup we’ve wanted for ages, and it’s just as delectable as we could’ve imagined. With princesses, queens, a noble’s daughter, and a priestess in a room together for the first time, there’s no telling how many layers of backstabbing and talking smack behind each other’s back will occur while Ellaria Sand looks on from Dorne. At least Margaery and Sansa still seem to be getting on.

As much as we’d watch this on repeat, we don’t see it lasting very long. With Cersei trying to get rid of Margaery and wanting to kill Sansa for killing Joffrey, Margaery Sansa wanting revenge on Cersei, Daenerys trying to break the wheel with her might (and dragons), and the fact that Melisandre could probably wipe all of them out with another sacrifice of king’s blood, it’s only a matter of time before they take each other out.

And Arya’s stuck watching on Braavosi TV, knowing she can retire as No One now that there’s a few less names on her Kill List.