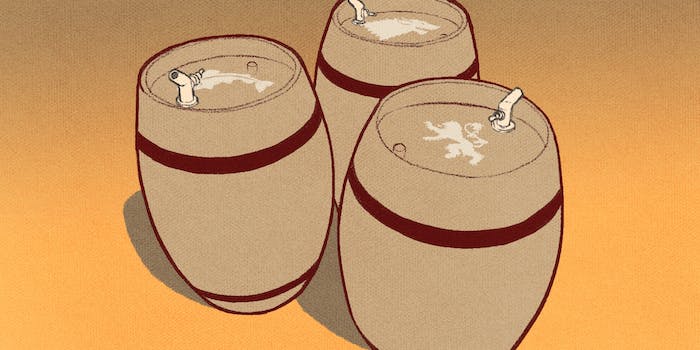 Pick the right brew with this ‘Game of Thrones’ beer guide

Get your pint glasses ready.

If you’ve read A Song of Ice and Fire, the series that Game of Thrones is based on, you know just how important food and drinks are to the story. They’re a major part of the Westeros trade economy, they’ve helped to highlight the divide between the rich and poor, and they’ve even been used as murder weapons.

Wine is the drink of choice of both Cersei and Tyrion Lannister, and it’s a huge commodity in Westeros and Essos. But for fans of Game of Thrones who want to toast or commiserate with their favorite characters, it’s all about the beer, thanks to a partnership between HBO and Brewery Ommegang.

Ommegang has released five different Game of Thrones beers over the past two-and-a-half years, but it’s not just spinning-off yet another Game of Thrones product for the shows millions of fans. The attention to detail in the brews is incredible, all the way down to the last spice, hop, and malt. Ommegang even has Game of Thrones fans who aren’t really beer lovers drinking it up.

The brewery is re-releasing two of its original brews—Iron Throne Blonde Ale and Take the Black Stout—this fall after fans requested it, many having missed it the first time around. And thanks to Ommegang, we got our hands on the brews, which are being sold separately and in a two-pack with a glass fit for any occasion. 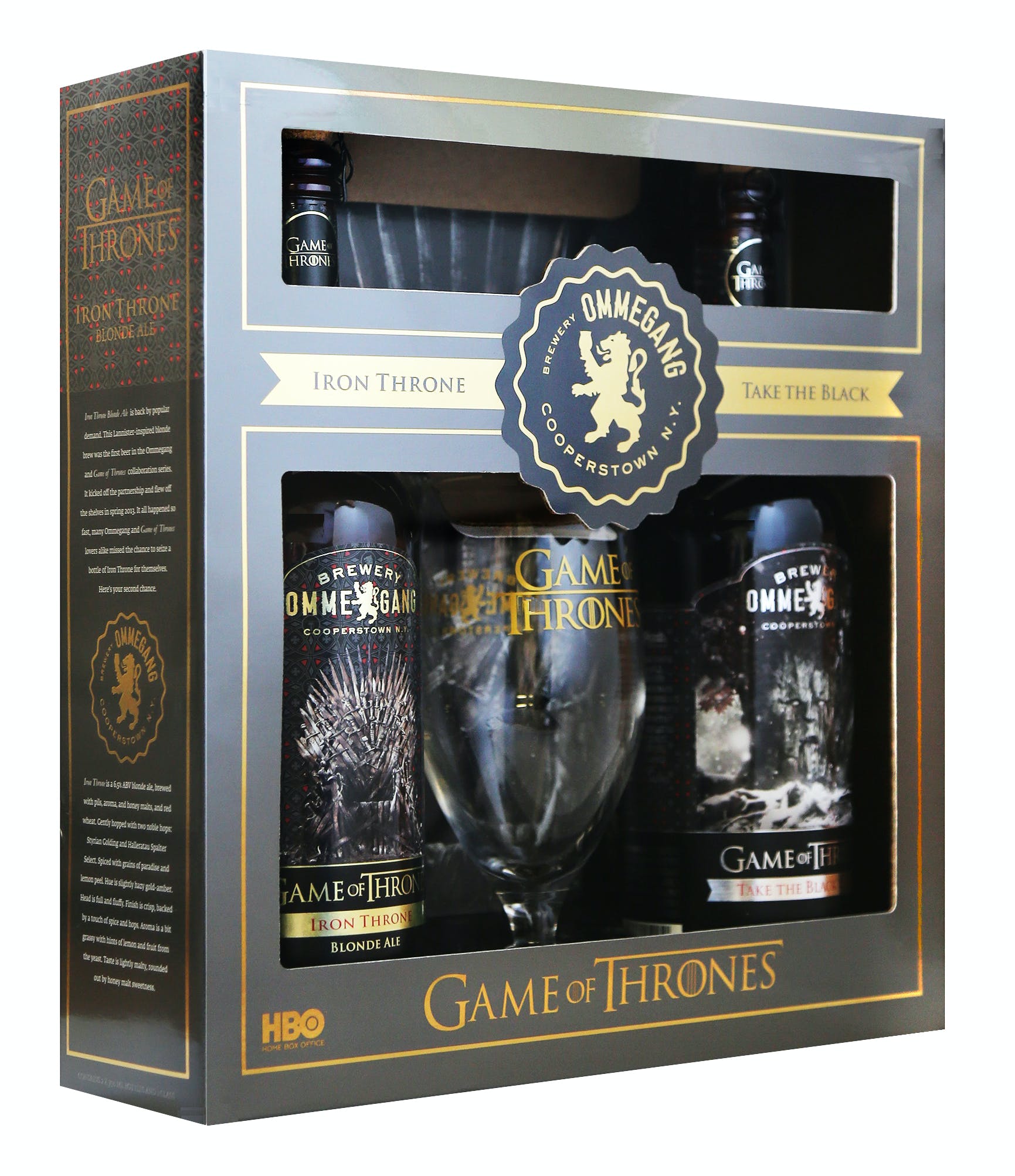 The two round out the Game of Thrones offerings with more recently released beers—Fire and Blood, Valar Morghulis, and Three-Eyed Raven. They capture the spice and bite of getting on the wrong side of one of Daenerys Targaryen’s dragons, the gamble of fate (because no man or woman is safe from Death) that comes with the iconic words of the Faceless Men in Braavos, and even the complexity and mystery of the Three-Eyed Raven—a character we know close to nothing about. Each is paired with Ommegang’s Belgian influences.

Along with the flavors bottled up in each brew, each beer has a story to tell. HBO points the brewers at Ommegang in the right direction, which will often tie into a certain character, place, or theme.

“The Iron Throne was a tie-in to Cersei,” Phil Leinhart, Ommegang’s Brewmaster, told me. “We took those cues and tried to translate it into the beer itself. She is blonde, it’s a blond ale, and then how she’s seemingly sweet on the outside but pure evil on the inside.” 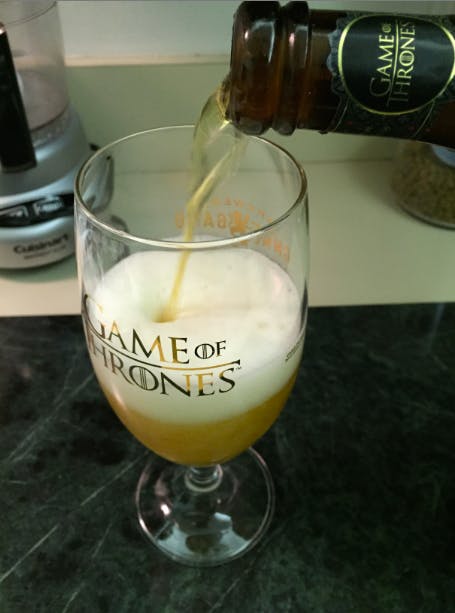 According to Leinhart, Ommegang went for a light beer so that it would be approachable, and it truly is. Iron Throne, which would be perfect for those meaty character-driven conversations and dishing on the political intrigue, goes down smoothly with little bitterness and a hint of lemon. The beer is a golden amber, reminiscent of the Lannisters in both look and feel; it’s an easy beer for novices to try while offering a kick when you least expect it. It’s also fairly light, so a glass or two won’t fill you up.

We could easily see this being served at an inn or even at the tables of the noble houses for everyday consumption. King Robert Baratheon, were he still alive, would certainly approve.

On the other hand, Take the Black is both darker and more filling, capturing the gloominess of the Night’s Watch, who’ve faced threats from outside and within. 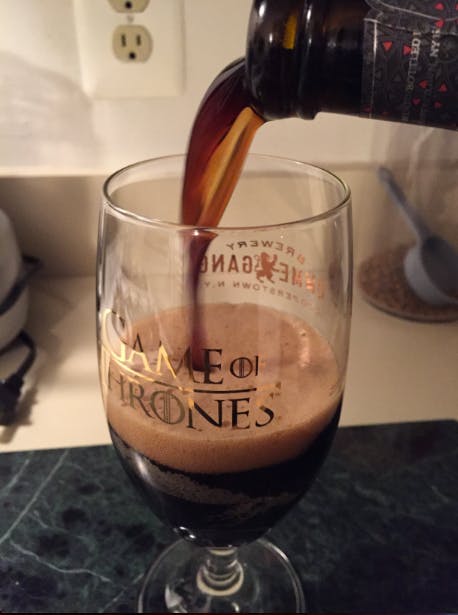 “[The Wall is] a very black, dark, foreboding place, so that was immediately very clear to us what that was going to be,” Leinhart explained. “Like a Belgian-style, Russian imperial stout. Fairly strong and foreboding.”

More fitting for action sequences (and those scenes that may otherwise make you lose your appetite), Take the Black has more malts and hops with hints of chocolate malt, caramel malt, and coffee that’s more on the bitter side. The beer itself is as black as the brothers’ cloaks with a dark brown head that’s just as fitting. Fans of darker beers will want to add this to their collection, but even if you’re not big on stouts it’s worth trying.

We can also picture this being a fitting brew for the Night’s Watch, who even have beer with their breakfast. When their food isn’t filling, a sturdy beer could certainly do the trick.

Either one of these would be great paired off with frantic live-tweeting come next season as the show inevitably causes us even more heartache.

With Game of Thrones’s sixth season visiting the Ironborn by way of Theon Greyjoy’s uncle Euron, Samwell Tarly’s family in the south, and a possible rebellion in the north, the inspirations for the next beer in the series are endless.

So which part of Westeros will Ommegang go to next?