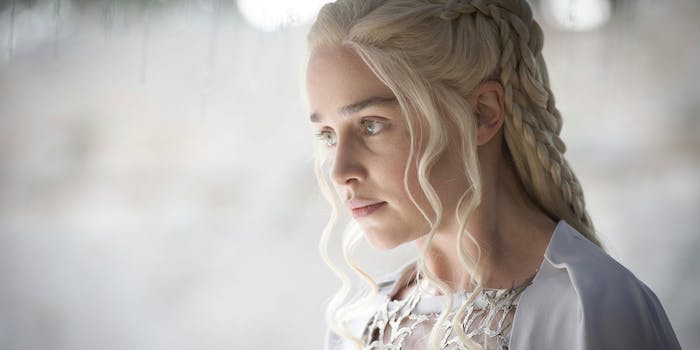 Is ‘Game of Thrones’ filming multiple endings? It depends who you ask

Emilia Clarke says there are multiple endings to 'Game of Thrones' being filmed.

We’re a long way off from watching the end of Game of Thrones, but the show’s cast and crew (and the powers that be at HBO) are determined that audiences don’t find out what happens until it airs on HBO. But the question of how they’ll accomplish that is much murkier.

Emilia Clarke recently appeared on the Awards Chatter podcast, where she talked about everything from her start on Game of Thrones as Daenerys Targaryen to her upcoming film Solo: A Star Wars Story with the Hollywood Reporter’s Scott Feinberg. But toward the end of the podcast (around the 01:12:31 mark), Feinberg asked her about the ending of Game of Thrones and how long she’s known about the show’s ending. Despite having read the end of the show, Clarke now says she has no idea how Game of Thrones truly ends because the crew is filming “lots of different endings.” (Clarke also noted that Game of Thrones season 8 is shot out-of-sequence, so the final scene she shoots won’t necessarily be her last one.)

Emilia Clarke: “I don’t know that I even do now. I’m being serious.”

SF: “So these are six episodes of the final season, which comes out in 2019. You’re saying, in the middle of doing it—”

EC: “I think they’re filming a bunch of stuff and they’re not telling us. I’m being serious—I’m being deadly serious. I think that they don’t even trust us.”

SF: “So you don’t know who ends up on the throne?”

EC: “No. I don’t even know. I read what I read last year—I’ve read those scripts. Holy moly. Took me a couple hours to come down from that. That was the most intense reading experience of my life.”

SF: “But you didn’t read the last episode?”

EC: “I did, and since then, you just—people are saying something on set and you’re just like, ‘I think that they’re filming other stuff and everybody’s being really cagey about it.’ And then there’s a lot of like, ‘Wait why’re you—what are you—wait a second.’ Cause there’s lots of different endings that could happen that I think that we’re all doing all of them and we aren’t being told which is actually what’s gonna happen.”

The idea that Game of Thrones may be filming different endings beyond how the show will actually end stemmed from a 2017 report. According to the Morning Call, HBO programming president Casey Bloys reportedly told a crowd at a college in Bethlehem, Pennsylvania, that Game of Thrones was planning to “shoot multiple versions” of the show’s ending so that fans wouldn’t know how the show would end until it aired. And since then, both Nikolaj Coster-Waldau (Jaime Lannister) and Maisie Williams (Arya Stark) have shot that idea down with Williams suggesting that Bloys was lying.

But Clarke’s comments suggest that HBO may have some tricks up its sleeve, and the idea of multiple endings might have some merit.

We are, at the absolute earliest, months away from Game of Thrones returning to television. The cast can’t talk specifics about Game of Thrones, but it’s almost guaranteed that actors on the show like Clarke who have other projects to promote will be asked about it. And with plenty of confusion about Bloys’ comments and whether the comments were as reported (HBO didn’t confirm or deny that Bloys made them when they first surfaced last year), the idea of whether Game of Thrones has filmed multiple endings to throw off fans serves as a convenient talking point. It’s certainly plausible, given that showrunners David Benioff and D.B. Weiss are on the record as not being fans of spoilers and leaks—something that has sometimes put them at odds with some Game of Thrones fans. The show had actress Sibel Kekilli visit the set in-costume during season 6 to trick fans into believing that Shae was returning.

But at this point, it doesn’t really matter whether Game of Thrones is filming footage and scenes with no intention of ever putting them in the show (versus scenes cut for various reasons in post-production). The debate of what’s real and what isn’t is there already with contradicting tidbits from the cast. As we get closer to season 8, that’s likely to continue.

We have this level of plausible deniability from the cast about whether or not this extra Game of Thrones footage exists and if they know the ending. It’s in a similar vein to how the Avengers: Infinity War cast spent most of the press tour saying that they didn’t know how the movie ended (some of them definitely did) and perhaps a few steps above the Game of Thrones cast lying to everyone—even President Barack Obama—for a year about how Jon Snow was really dead.

In one sense, the cast and crew are preserving big twists and endings, and not everyone wants to know what happens the way some spoiler-friendly fans do. But the façade also becomes really exhausting very quickly, especially when there’s photographic evidence or source material logic that says otherwise. In keeping up the confusion and debate about what’s real, Game of Thrones wants to have its cake and eat it too, all while trying to stoke excitement for a show that won’t air anytime soon.

Once the final episode airs, we might hear what really happened. Did Game of Thrones pulled one over on fans one last time, or was shooting superfluous footage for a show that already has a $15 million budget per episode completely preposterous? For now, it’s Schrödinger’s Iron Throne: It has one ending and multiple endings, and it will always be both until we open that spiky box.