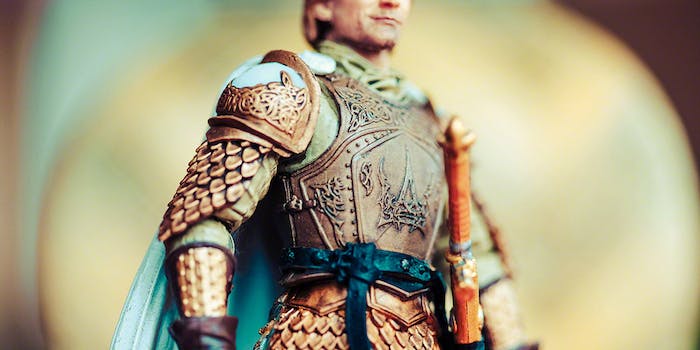 9 ‘Game of Thrones’ toys HBO should be making

We've got some ideas.

Bringing a little bit of Westeros straight into your own living room is about to become that much easier.

HBO is teaming up with McFarlane Toys to offer realistic Game of Thrones sets and figurines, with the first set to debut during San Diego Comic-Con. Per Entertainment Weekly, fans can view the Iron Throne Room set at SDCC, but they won’t be able to buy it or other sets such as “Mother of Dragons” and “Attack on The Wall” until a later date.

With characters and sets ranging from $14.99 to $49.99 and figurines going for $3.99, you’ll soon be able to reenact your Joffrey Baratheon assassination fantasy crossovers with gusto.

“[HBO is] a world-class network and Game of Thrones is one of the most visually compelling shows that I’ve ever seen,” McFarlane told Entertainment Weekly. “We’re thrilled to have the opportunity to create high-quality collectible construction sets based on this fan-favorite property. Both collectors and fans of thr epic series can build their favorite scenes with this new product line.”

That’s all well and good, and the figurines look like they’re made with the sort of intricate detail fans can get behind. But they severely limit the types of Game of Thrones products HBO could be offer fans. A show that has its own Monopoly set can sell anything. Luckily, we’ve got some handy suggestions for HBO to expand what it offers in time for next year’s SDCC.

Most of us won’t be able to afford the $30,000 life-size replica Iron Throne, much less fit it in our apartments. Here you can rule your pool in style with an iron fist. You might not want to pair it with a replica sword, though.

2) Children’s book on how not to be a ruler

And every page is basically Joffrey at his worst. We still kinda miss you, especially after your successor in the most-hated character department turned out to be even worse.

I found a set of mini Funko toys at Barnes & Noble the other day that seemed to ever-so-slightly support a major A Song of Ice and Fire theory but was probably just a coincidence. But next time? Do it on purpose. Put Rhaegar Targaryen with Lyanna Stark and a mini Jon Snow baby. Robert Strong and the Gravedigger ready to battle. A resurrection set at the Wall. Another Stark reunion tease. The possibilities are endless—and the fan rage will be even greater if none of that actually happens.

For harmless playtime and the inevitable and ill-thought Game of Thrones high school play adaptation.

You know, for those times when you’re on your fourth trip to the ice cream carton.

For when you want to escape someone at the bar but don’t actually want to leave the bar.

Because he was onto something before his untimely death at the hands of a Shadow Assassin.

8) Box set of alcohol and tissues

With people still upset with the latest deaths in the most recent episodes (maybe), it’s good to prep for the next big blow next season. This perfect gift could have tiers for beer (Ommengang Game of Thrones beer), wine, and the hard stuff, so you can sob into your drink and have something handy to wipe your nose. Tyrion would be proud.

Practical and full of revenge!

Never do this, HBO.

"HBO Is Coming Out With A Line Of ‘Game Of Thrones’ Toys" http://t.co/Eh5Ql7AOTA