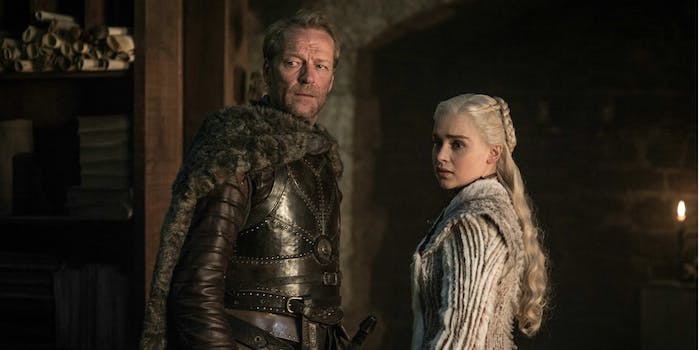 HBO can’t seem to stop Game of Thrones from leaking.

Last week, the premiere episode of the award-winning series leaked on DirecTV Now a full four hours early. Unfortunately for spoiler-conscious fans, the series’ second episode—set to air Sunday night at 9 pm EST—has gotten a similar treatment, Variety confirms. Though it wasn’t as openly shared as last week’s episode, the second leak is odd, given how tight-lipped the actors and others involved have been about the highly-anticipated final season.

A Reddit thread dedicated to outlining the events in the leaked episode was up by 11 am this morning, a full 10 hours before it was set to air.  A Redditor who goes by u/ViolaineSugarHiccup has been updating the thread as they watch. The r/freefolk subreddit is filled with references to the leak, attributing it to German Amazon Prime.

Reddit is not the only site with spoilers, however. A Twitter user, @noone10247583, began posting screenshots from the leaked episode at 9 am EST. The screenshots depict some important scenes from the episode, without warning—so proceed with caution.

Variety said that the episode was put up on Openload, but it was quickly taken down.

The title of season 8’s second episode has not been officially announced. HBO and Amazon did not return the Daily Dot’s request for comment prior to publication of this story.

Updated April 21, 5:31pm: An Amazon spokesperson told the Daily Dot, “We regret that for a short time Amazon customers in Germany were able to access episode 2 of season 8 of Game of Thrones. This was an error and has been rectified.”