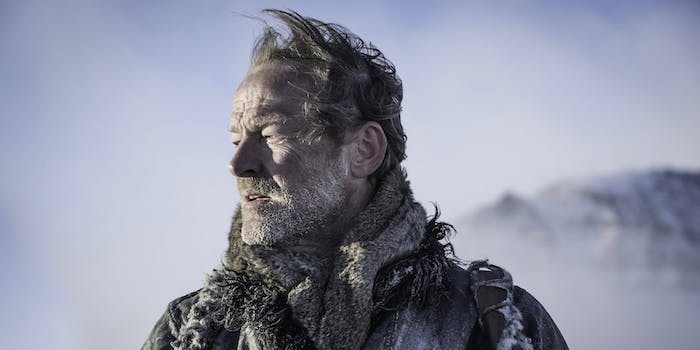 A cryptic quote has riled up fans.

Over the course of his longer-than-most lifespan on Game of Thrones, Ser Jorah Mormont has escaped the wrath of Ned Stark, made friends with the Dothraki, gained—and then lost and later regained—the trust of Daenerys Targaryen, survived a bout of greyscale, and escaped his first encounter with the Night King. But will his luck hold at the end of Westeros as we know it?

In a new interview with the Daily Express, Iain Glen, who’s played Jorah for the entire run of Game of Thrones, looks back on the past several years, in-between giving the tiniest of hints as to what fans can look forward to in season 8. But after being asked about his experience playing Jorah, Glen had a cryptic note about his time on the show.

He said: “It allowed me to travel all the world.

I am one of the lucky ones who made it through!”

He also called the final six episodes of Game of Thrones “very emotional.”

Glen’s quote about him making it through in and of itself isn’t really all that mysterious, but as fans attempt to parse everything said by Game of Thrones actors to find clues as to what’ll happen to their characters some have interpreted Glen’s quote about him being “one of the lucky ones who made it through” to confirm that Jorah survives the series.

It’s certainly possible that he does survive the series. Jorah has been through a lot, and as one of the few people in Westeros to have survived greyscale—an affliction that drives whoever contracts it to go mad as their skin to turn to stone—having him survive only to die in season 8 might feel like a bit of a letdown. But you can also argue that his survival gives him a chance for redemption and to die while fighting for his queen.

Glen could also mean that he’s just one of a handful of original Game of Thrones cast members to have made it all the way to season 8—an incredible feat considering Game of Thrones’ high body count. Jorah’s fate and whether or not he survives the Army of the Dead and Westerosi politics may still be up in the air, but no matter what happens, Jorah got to see much more of it than most.