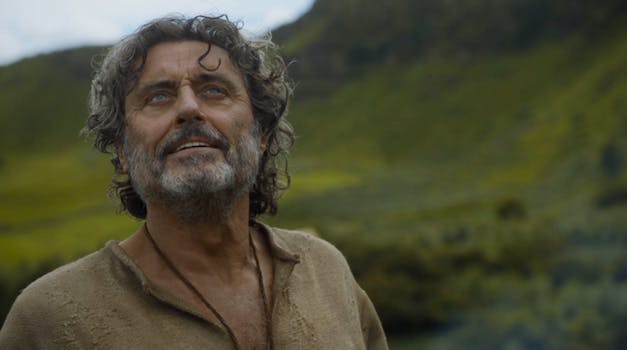 Could the long-theorized Cleganebowl actually happen on ‘Game of Thrones’?

What is hype may never die.

Warning: This article contains spoilers from the latest Game of Thrones episode, “The Broken Man,” and minor spoilers from A Song of Ice and Fire.

In a season already full of big returns and resurrections, the latest character returning to Game of Thrones after sitting out for multiple seasons is already building hype for a big event fans are hoping for.

The last time we saw Sandor Clegane, better known as the Hound, at the end of the show’s fourth season, he was practically on death’s doorstep. Wounded from his fight against Brienne of Tarth, he begged Arya Stark to give him mercy and kill him. She refused and left him to die as she headed to Braavos. As far as many fans knew, the Hound was dead, but the show’s cold open revealed otherwise.

Ian McShane’s Brother Ray—a composite character composed of Septon Meribald and the Elder Brother—oversees the construction of a sept. He’s a direct contrast to the High Sparrow’s managerial decisions, and he’s all smiles as he gives orders. As the camera zooms out, it zeroes in on one man who is able to carry a log much bigger than him on his own. We certainly know that face.

Unlike Jon Snow’s resurrection, which required assistance from the Lord of Light, or the transformation of Benjen Stark, who had aid from a dragonglass shard, or even the Mountain’s return to glory with some questionable medicine from Qyburn, the Hound’s return to full strength wasn’t very mysterious in nature. A few days after Brienne and the Hound fought, Ray found his body, which was covered in flies. He even prepared to bury him before he coughed. It just took some old-fashioned, off-screen healing. Ray believes there’s a reason why the Hound is still living after everything he’s been through.

“Gods aren’t done with you yet,” Ray tells the Hound, echoing a sentiment from Beric Dondarrion back in season 3.

Now a changed man, the Hound is assisting Ray in building the sept and living a life of peace—even if “hate” did keep him from dying in the first place. But anything as peaceful as this can’t stay that way for long in Westeros. While the Hound is off chopping wood, everyone in the village is killed by the Brotherhood Without Banners—and Ray is hung in his own, unfinished sept. After looking on at Ray, the Hound picks up an axe.

This particular plotline felt far-removed (both in tone and pacing) from the rest of the season as a whole, but it set up the Hound’s return to the story—and maybe even his place in a long-awaited battle.

It’s got the tiniest of basis in book canon and there’s no indication yet in the show it’s going to happen. But many book fans have long been hyped about Cleganebowl, joined by viewers who are now just getting on board.

The Bowl That Was Promised

Simply put, Cleganebowl is a battle to the death between Ser Gregor Clegane (known as the Mountain) and Sandor—and not just because they want to kill each other. They’d be fighting each other in a battle by combat on the sides of Cersei Lannister and the Faith, respectively. The outcome ultimately decides Cersei’s fate in the eyes of the gods.

At first glance, this fight looked to be straight-up tinfoil. Oberyn Martell poisoned the Mountain and the Mountain’s head was sent to the Martells as proof they’d gotten revenge over Elia Martell’s death. (Like most of the Dorne plot, this was left out of the show.) And Arya left the Hound for dead, albeit under slightly different circumstances in the books. But once fans peeled away the pages, those two things seemed less certain.

In season 5, we see Qyburn experimenting on a body so massive it couldn’t be anyone but the Mountain. He returns as a member of the Kingsguard after Cersei’s walk of atonement who has pledged a vow of silence until all of Cersei’s enemies are dead. (So he’s going to be silent for a long time.) While he’s called Ser Robert Strong in the books, Game of Thrones doesn’t bother with that distinction at all and just calls him “Ser Gregor” and “the Mountain.” The return of Hafþór Björnsson also supports this.

The Hound also seems to make another appearance in the books. Brienne, who doesn’t fight the Hound like she does in the show, is told that the Hound is dead by the Elder Brother (one part of Ray’s character) in A Feast for Crows. However, a gravedigger whose description matches the Hound is seen on the Quiet Isle while Brienne is on her quest to find Sansa. (Which is another book-only plot.)

The gears are in motion, but don’t buy tickets yet

For a theory based on so much uncertainty and insinuations, it’s always good to remind ourselves of what’s actually happening in the show.

The matter of how the Hound was going to be recruited to fight for the Faith has always been the weakest part of Cleganebowl. As far as we know, Septon Meribald (and now the dearly departed Brother Ray) have no visible connection to the High Sparrow in King’s Landing. Now that the Hound is on his own, the likelihood of him being recruited is far less likely.

The Hound appears to be gunning after the Brotherhood Without Banners right now, but we’ll have to wait to see how successful he is in that endeavor. And if he’s killing a bunch of people, he might snag the attention of King’s Landing (and with that, the Faith) and be forced to fight instead. With so much happening in the final three episodes, we might not even see that fight this season.

But still, it’s a bit murky. But that’s not about to stop those on the hype train.

The stakes have never been higher, but none more than Cersei

So why does this hypothetical matchup even matter? Because it determines whether Cersei lives or dies, and neither side will come out of it unscathed.

If the Mountain wins, Cersei is free. She gets to stick it to the Faith, something that may likely make Tommen’s relationship with the High Sparrow rather uneasy. But the Hound would be dead.

If the Hound wins, Cersei dies. While she may be polarizing among fans (and nobody may miss the Mountain), that also means the Faith is victorious. And Cersei isn’t going to go down without a fight. Maybe that’s where the wildfire in Bran’s visions will come into play?

It’s a fight we want to see, but whether we will is a different matter entirely. Hype is coming—and death will come with it.