And nobody even died.

As much as I love to immerse myself into the world of Game of Thrones and A Song of Ice and Fire, I probably wouldn’t want to live there.

With winter coming (as the Starks are apt to remind us), rampant war between the big families, and the constant looming threat of violence and/or death, it’s not a good time to be alive in Westeros. Some of the characters who have survived have done so by any means, sometimes with questionable morals. Also, there’s dragons. But if something could sway me, it’d be the food.

While I didn’t actually go to Westeros to eat a feast fit for a king or queen, I probably got about as close to it as I could this week at the Game of Thrones-inspired feast from Brewery Ommegang and L’Apicio, an Italian-inspired restaurant in the East Village. 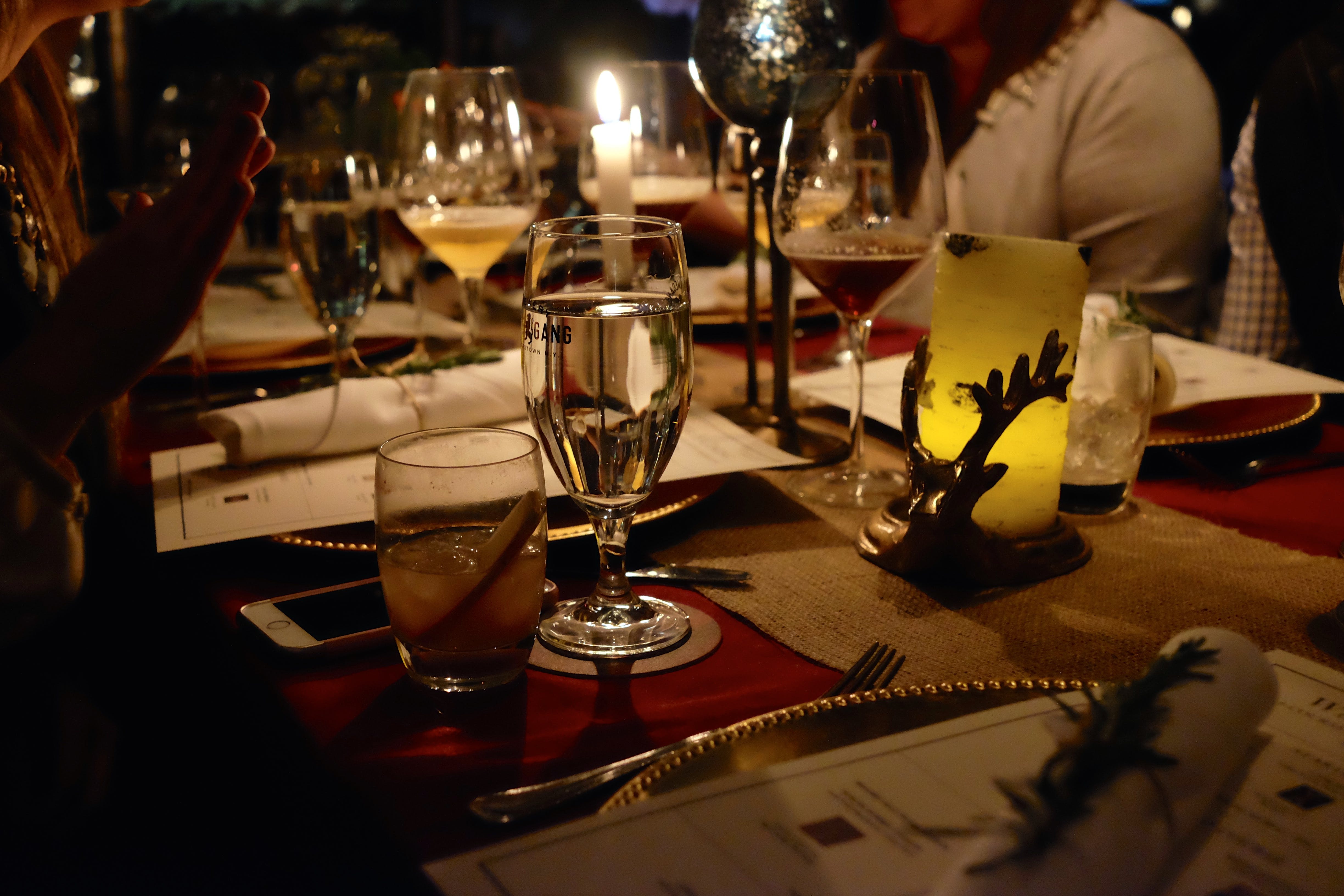 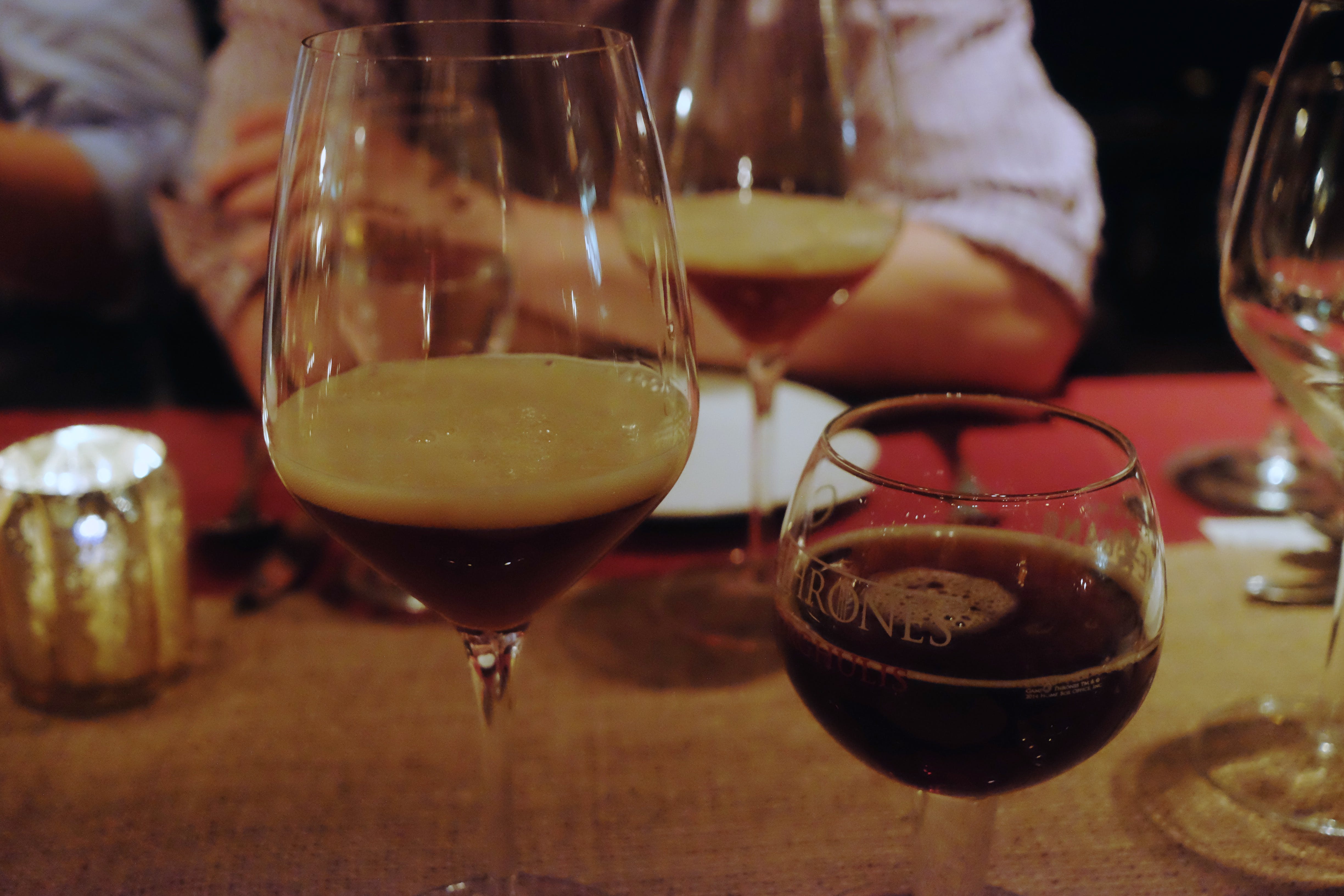 The presence and importance of food in Game of Thrones is apparent from the many times we see on screen; however, it’s nothing compared to the books.

“I didn’t realize how much [Game of Thrones] was about food until I read the books,” executive chef Gabe Thompson told me and the 33 others who attended the feast.

That’s a bit of an understatement. There’s at least 160 dishes in the first four ASOIAF books alone—even more once you include what’s mentioned in A Dance With Dragons, and according to Martin, some his critics have called him out for “gratuitous feasting.”

You could probably even say that the food is its own character. What someone eats can characterize a part of their world, signal what someone may be feeling, and push plot developments. After all, two of the most pivotal moments in the story happen at wedding feasts. Daenerys has to eat the heart of a stallion to make her son strong. And it’s heavily hinted in ADWD that Wyman Manderly killed three Freys, cooked them into some pies, and served them during a wedding (including to some of their kinsman).

The lack of food is just as important. We learn what meals characters dream about when they’re starving, and see characters worry over the consequences should their supplies run dry. If the food runs out in places like King’s Landing once winter arrives, pretty much everyone is doomed. 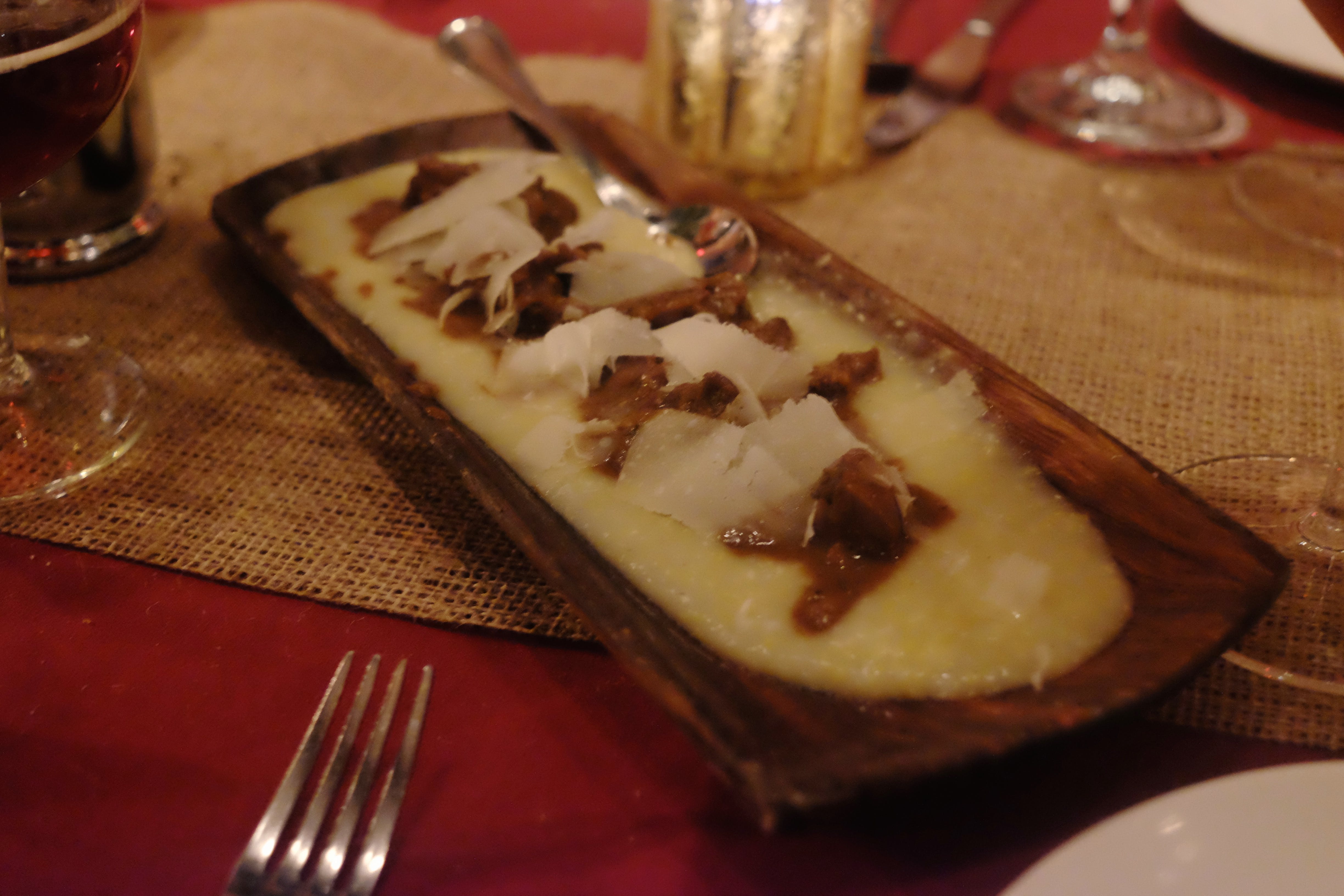 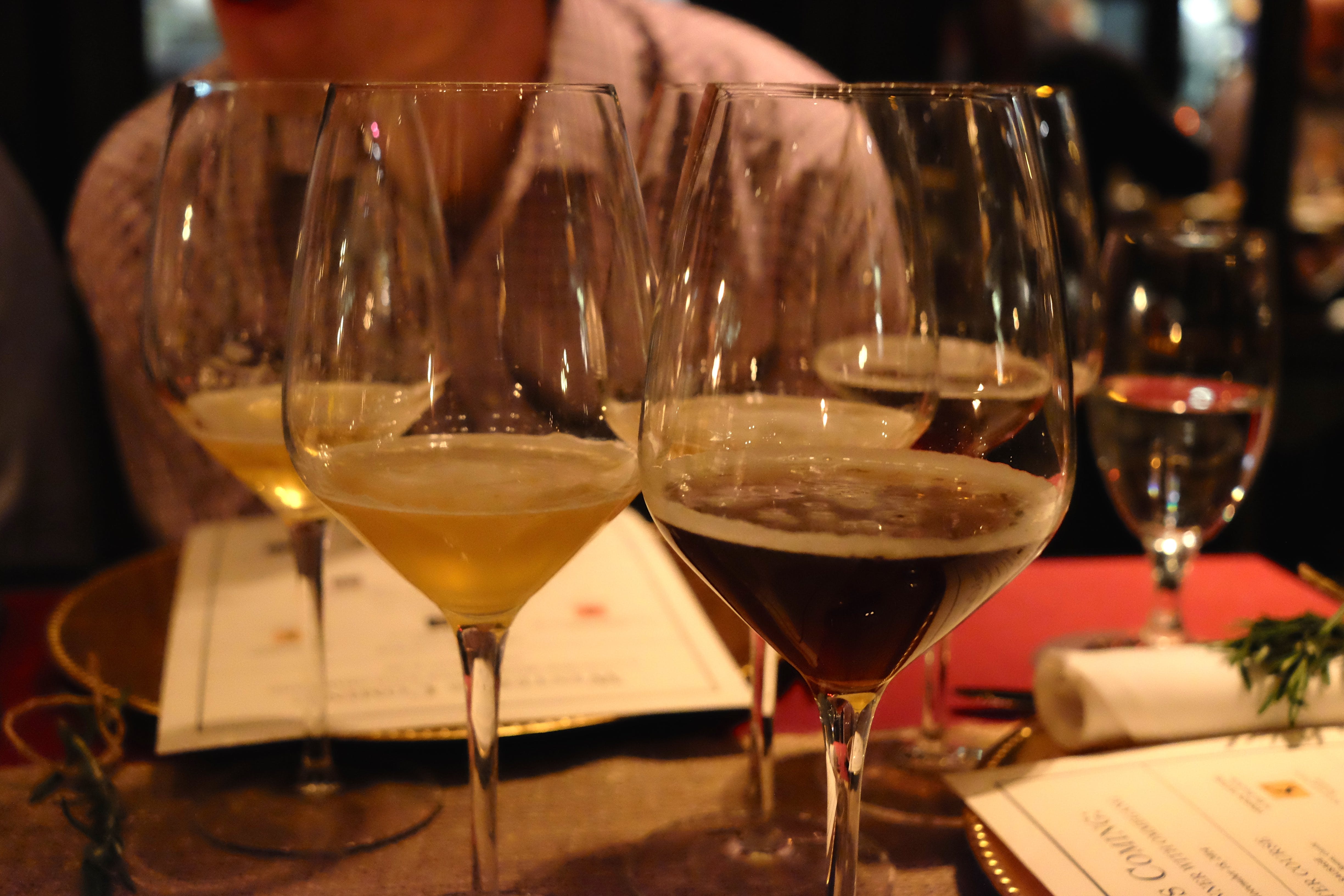 Fire and Blood and Witte beers

I swear, George R.R. Martin must be a foodie or something.

Despite his vast descriptions of food, Martin had no plans of releasing any Westerosi cookbooks, saying that he was more of an eater than a cook. But after he received an email from Chelsea Monroe-Cassel and her roommate Sariann Lehrer, two food bloggers from Boston who were recreating the dishes from Martin’s books, he put them in touch with his editor and they put together A Feast of Ice and Fire: The Official Game of Thrones Companion Cookbook.

Ambitious Game of Thrones party hosts and professional chefs have been taking inspiration from the show as well. Which brings us to the table of L’Apicio.

Thompson said he based his four-course meal off the Great Houses of Westeros, playing on the house sigils and plot points in their stories. For instance, he represented Houses Tully and Greyjoy with seafood dishes and made lemon cakes for the Starks due to Sansa’s love of them. For House Lannister, he included wild boar, Cersei’s new favorite meat after one killed her royal husband in A Game of Thrones. Other dishes included Easter eggs for fans, such as a Bolton dish with the sausage casing removed to reference their reputation for flaying prisoners. 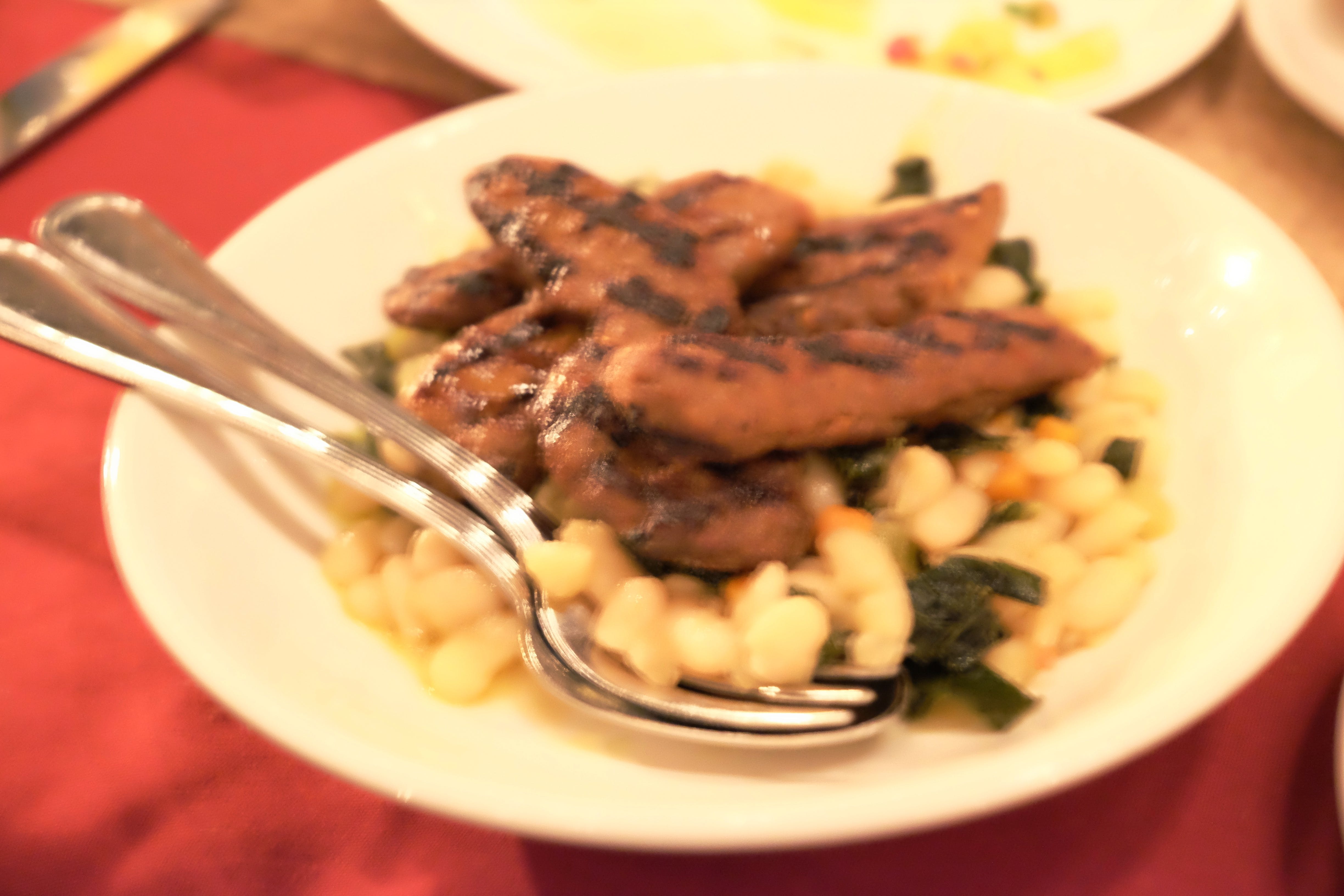 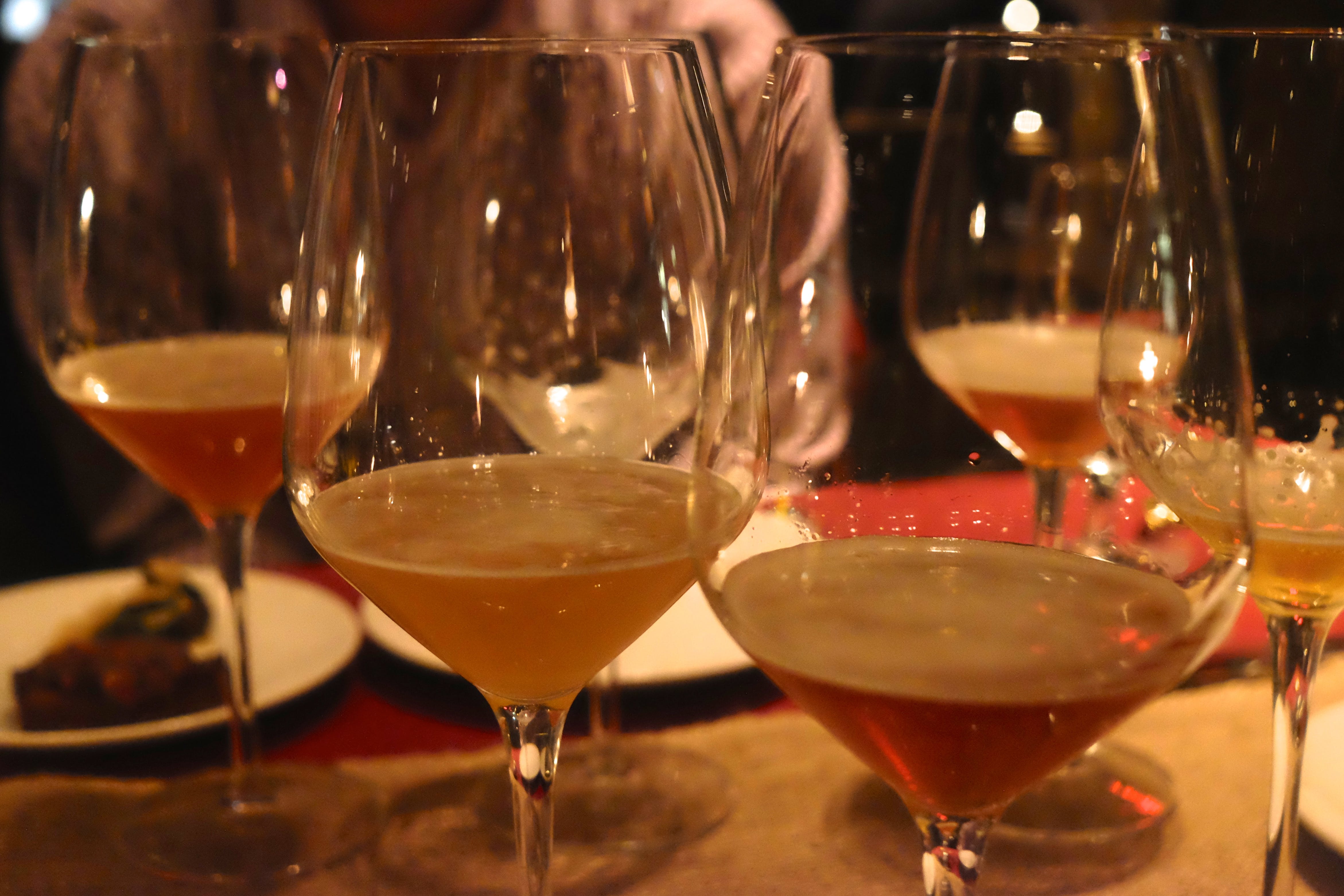 The only thing really missing from Westerosi cuisine, Thompson noted, is pasta.

Each course also included a pairing of two beers from Ommegang, which collaborates with HBO to make the Game of Thrones themed beers. When I asked Kevin Caskey, a sales representative who worked for Ommegang and attended the dinner, which came first, the food or the beer pairing, he told me it was a bit of both. When planning the dinner, Ommegang sent some beers over to Thompson, who had a bit of an idea of what he was planning to do.

“Gabe really knows his stuff,” he told me toward the end of the night.

I had originally expected to be placed at a small table by myself when I arrived at L’Apicio Tuesday night, but the restaurant—which has put on themed dinners in the past—had a small room with larger tables just for the occasion. Even if you went alone, you’ll end up talking to the people around you; serving sharable plates of food (aside from the Seafood Stew) helped too. It’s how I ended up talking to Caskey and two married couples who sat near me for much of the night. 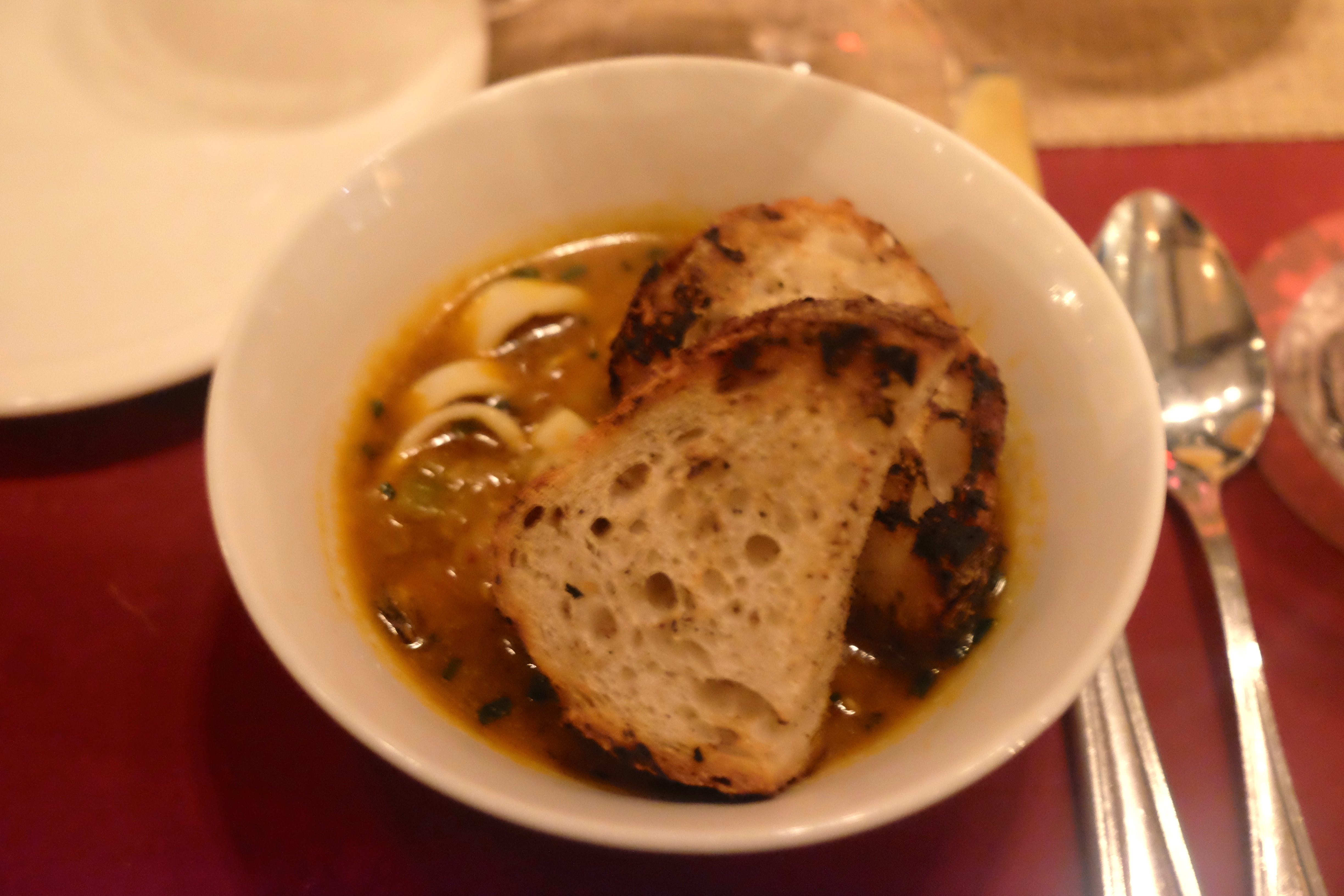 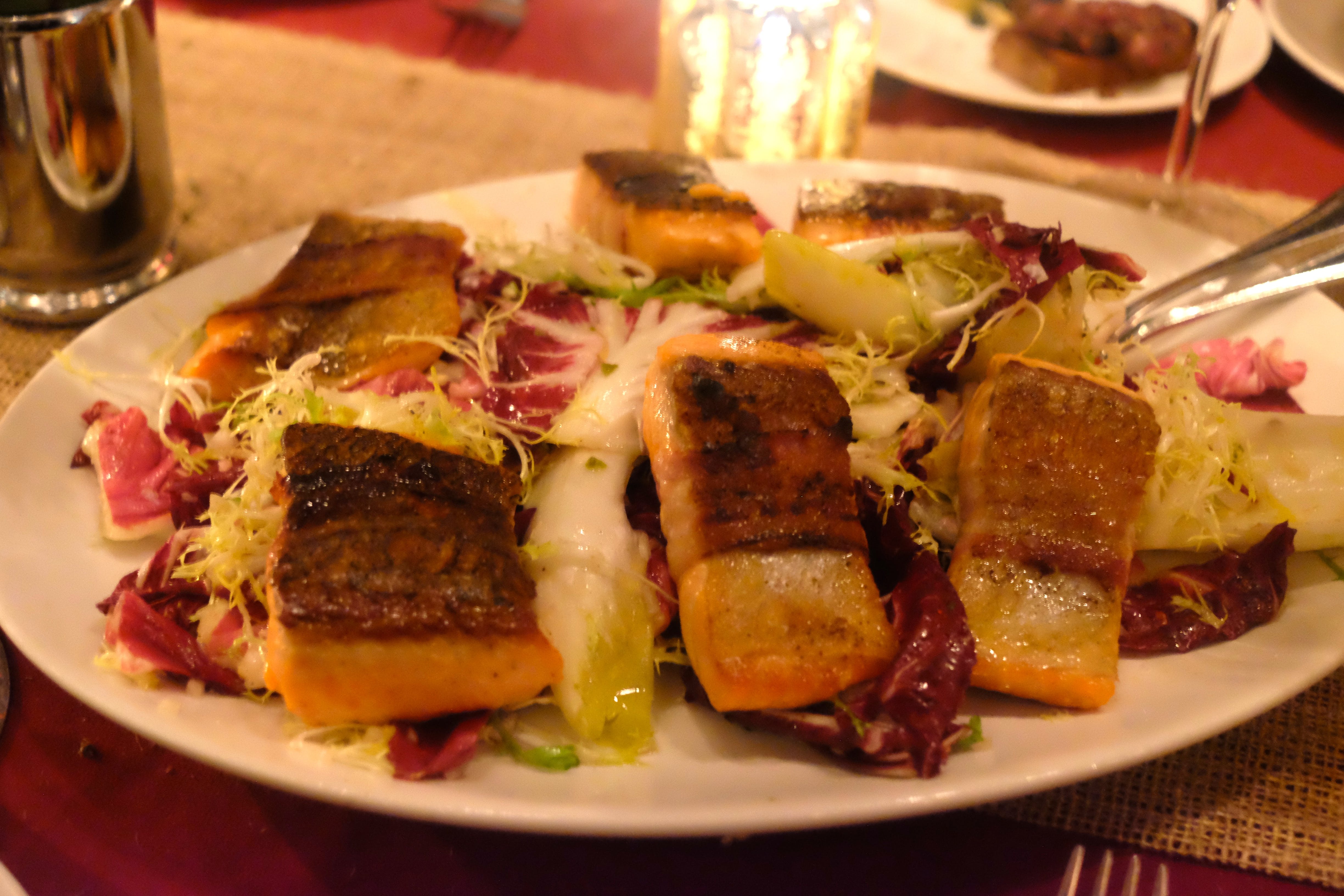 Bacon-wrapped trout with chicories and lemon, inspired by House Tully.

After all, it was a safe assumption that we’re all fans of the show. At the very least, we liked food and beer enough to shell out $95 for a ticket (plus gratuity, taxes, and fees). Although cosplay was suggested, only a couple of people wore anything Game of Thrones-related. Between courses, the sales reps tested the audience on some Ommegang and Game of Thrones trivia.

Caskey, Josh, Christine, Dwight, and Katie, were all fans of the show beforehand, but they didn’t initially get into it. Christine mentioned having to show Josh the pilot a couple times before he caught on. Dwight binge-watched the show at once. It was quickly discovered that a simple bathroom break was enough to get anyone lost while watching the plot. Binge-watching is great way to get into a show fast, although you may end up losing track of what season it’s on once you catch up and are forced to wait like anyone else.

When we weren’t talking, we were stuffing our faces. 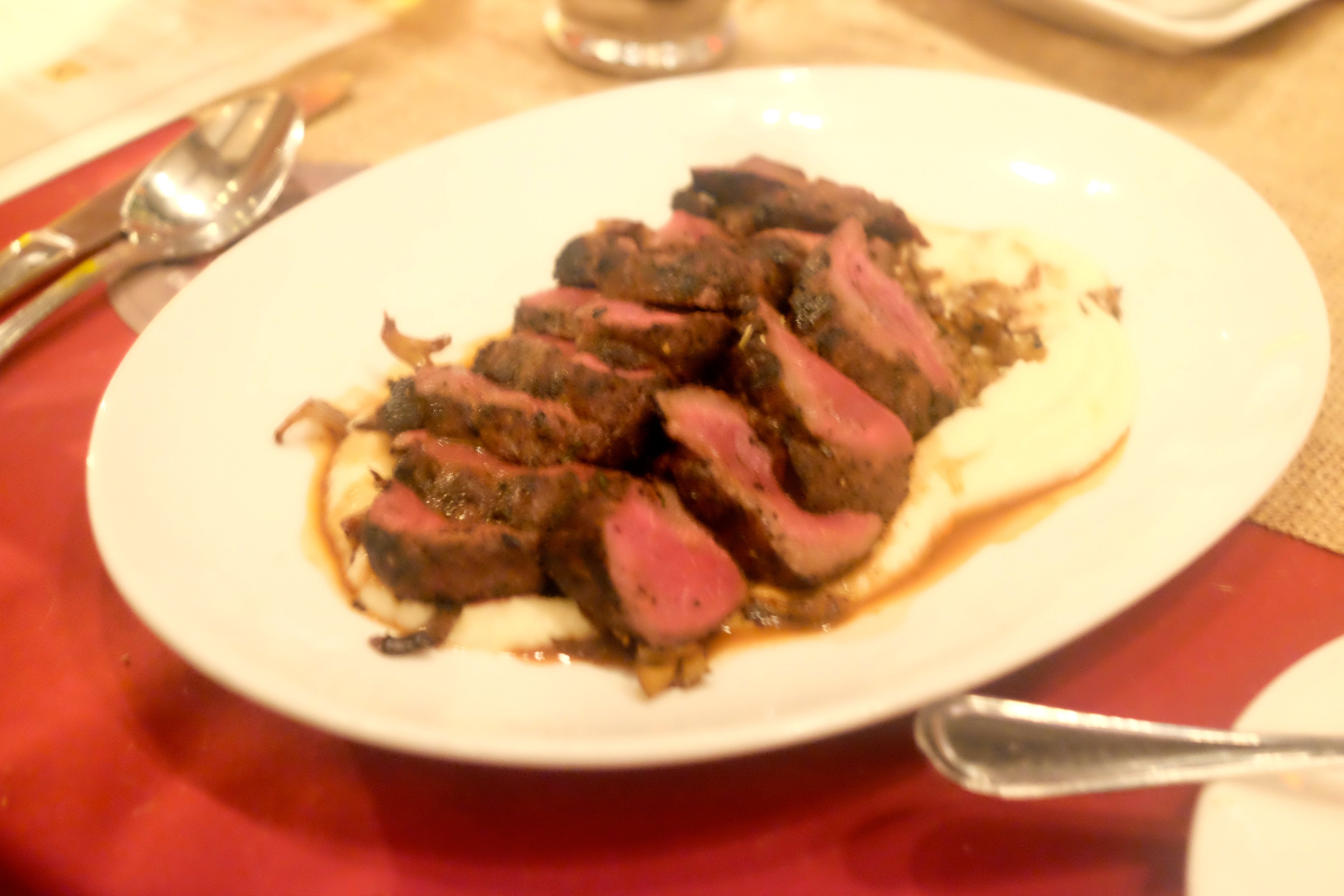 Ommegang and L’Apicio presented each course by explaining the dishes being served and the beers paired with them. The majority of the drinks were selections from Ommegang’s set of brews, but they did include two Game of Thrones beers: Fire and Blood, released at the start of season 4, and Valar Morghulis, which is currently available to purchase.

I’d never attended an event quite like this before, both in terms of food and a multi-course meal, but I was impressed with what I saw. I hit that proverbial wall of being too full at least twice, but then the next course came out and I found myself ready to eat more. Ever the picky eater, I found myself trying things I never would’ve normally eaten under normal circumstances, and aside from the lemon cakes being a little too sour for my palette, I had no major complaints. I wish some of the offerings appeared on a regular menu. 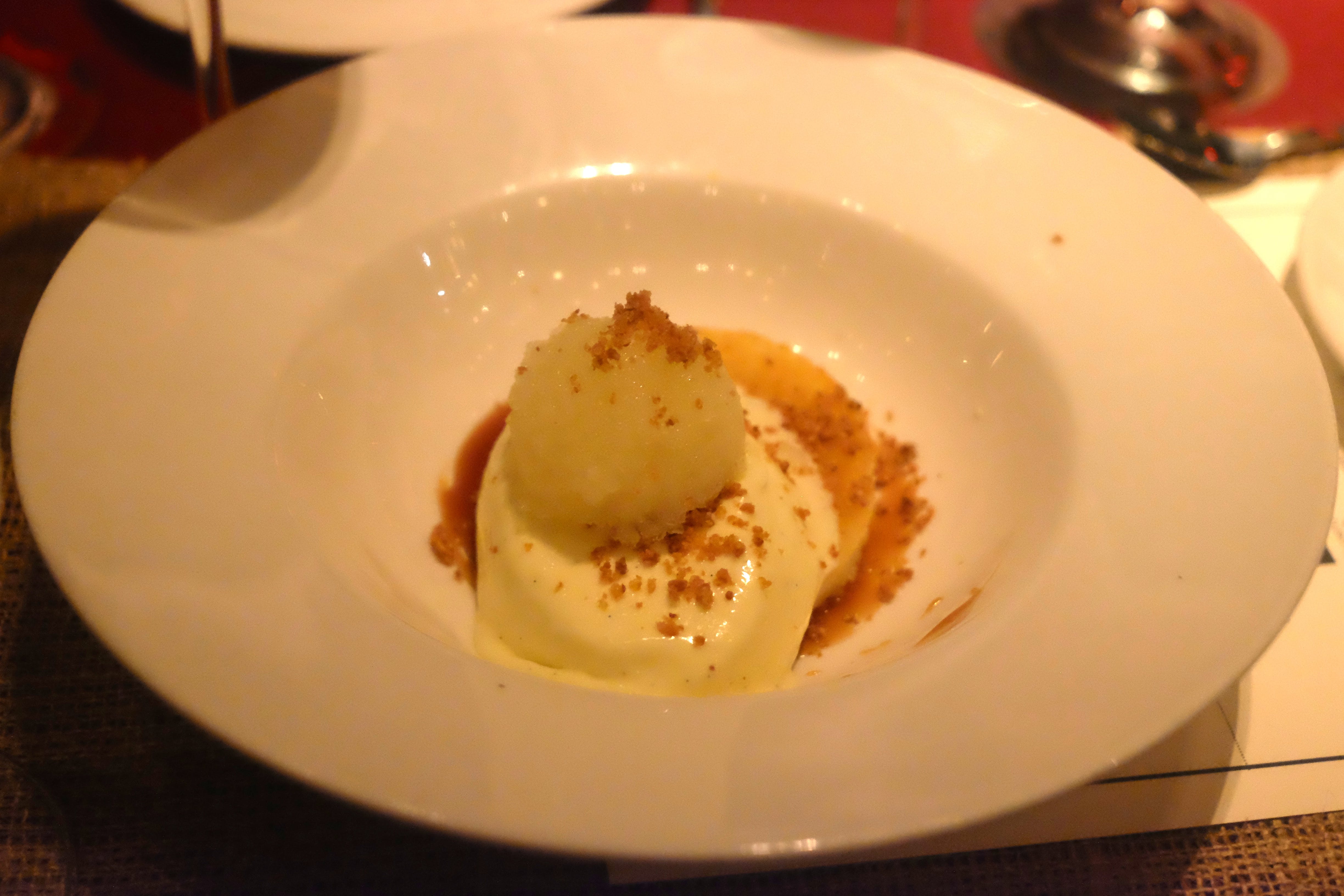 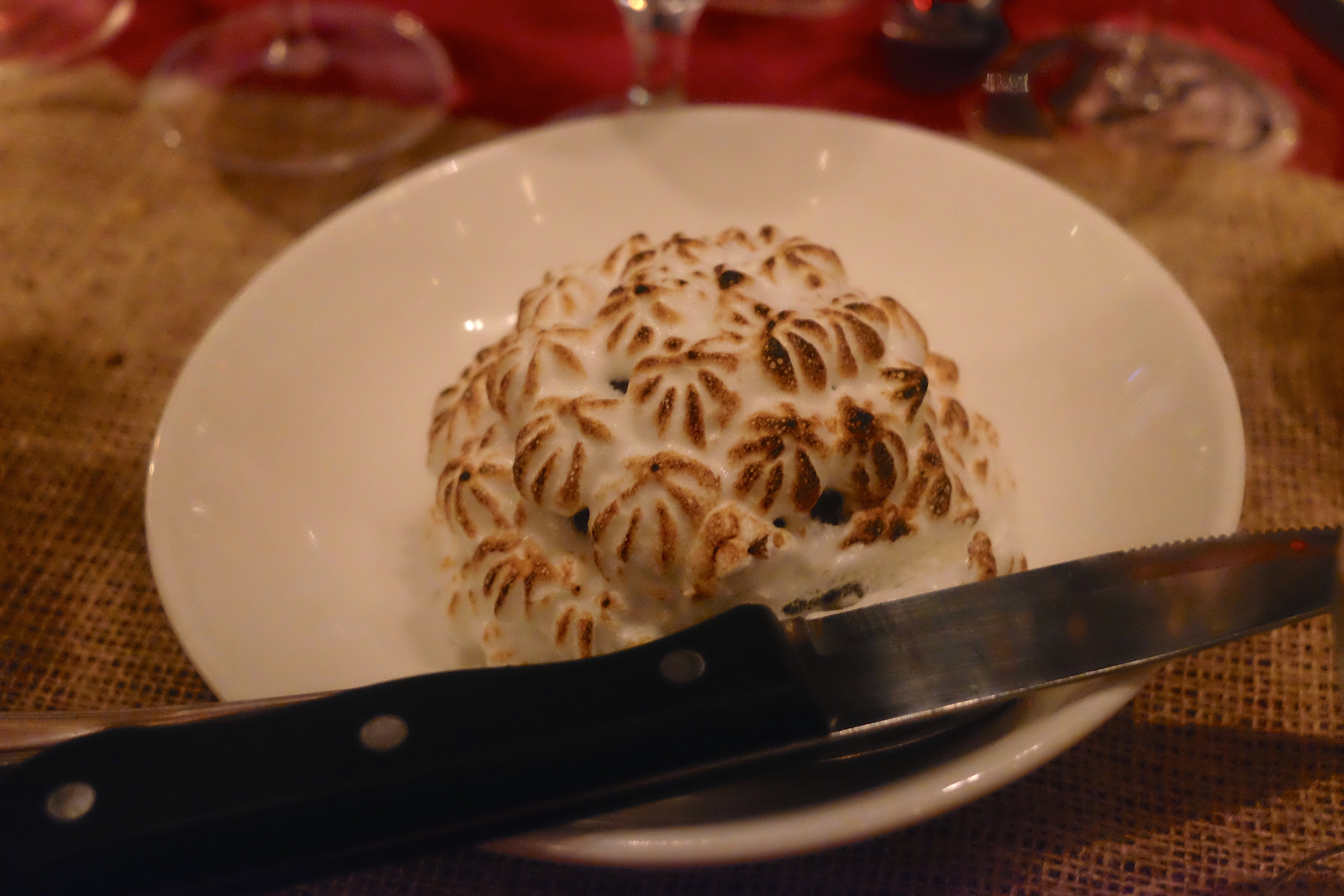 L’Apicio opted to pair some bread with oil instead of salt, as per the Westerosi ancient tradition of guest right, but the EventBrite page promised that the meal would be “sans fatal twist ending.” Being alive to write this, I can verify there was no poisoned wine or meat pies filled with human flesh. No musicians sprung a murderous ambush, and nobody played a foreboding rendition of “The Rains of Castamere” either.

I was stuffed and content as I left the restaurant and embarked into the bitter cold of a New York City night in a bit of a food coma. It might be a more boring ending per Martin’s usual affair, but for me it was easily the most satisfactory.