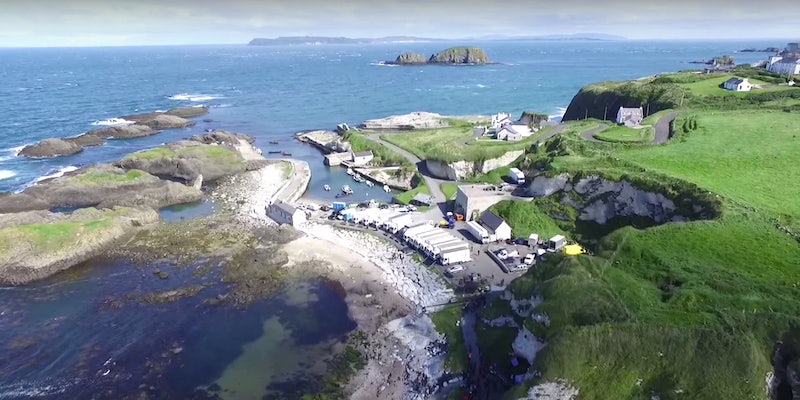 Warning: This article contains spoilers for Game of Thrones season 6.

Although Game of Thrones banned drones on the main Belfast set earlier this year, that hasn’t stopped at least one drone enthusiast from filming the production working on a big scene recently in Ballintoy Harbour, Northern Ireland.

A YouTube user going by the name Eye In The Sky captured the aerial footage from a distance, and while it’s difficult to see what’s going on, you have to admit that the scene itself will likely look absolutely gorgeous. At one point, the drone passes over a number of people—which might include a film crew—standing in shallow water.

If Game of Thrones wasn’t filming there, it could certainly double as a tourism promotional video

A comment from Eye In The Sky claims that Game of Thrones didn’t apply for a no-fly zone permit, so it was legal to fly a drone over the set.

The video, which was uploaded to YouTube on Sept. 2, corresponds with the discovery (and later confirmation) that Danish actor Pilou Asbæk had been cast as Euron Greyjoy after being spotted in Ballintoy Harbour. Game of Thrones is filming in the same location it used for Pyke, home of the Greyjoys, back in season 2. With reports that Gemma Whelan, who plays Yara Greyjoy (Asha in the books), was also spotted on the set, it could mean one major thing for Game of Thrones next season: There’s a Kingsmoot coming.

H/T Mashable | Screengrab via Eye In The Sky/YouTube